Luke is growing so quickly!!  I weighed him this morning and he weighed 9 lbs and 12.5 ounces.  I just can't believe how much weight he puts on each week.  Because he is growing so quickly, I had to buy him some new clothes.  He's now out of his newborn clothes and wearing 0-3 months clothes.  At the rate he is growing though, I'm afraid he won't get a lot of wear out of these.  They have some pretty cute clothes for little babies.  I bought him a little Nike warm-up athletic outfit, and I also bought him some "little man" clothes.  Here he is posing in what I call "little man" clothes: 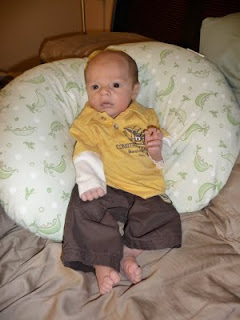 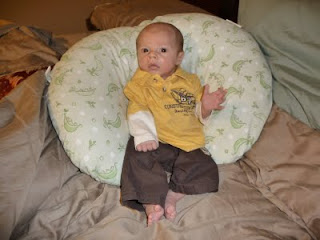 We are beginning to get into more of a routine.  He has been sleeping about 4-5 hours during the first part of the night on most nights--but is a little difficult to get back to sleep after that.  So, Drew and I are now trying to get on his schedule so that we can also get 4-5 hours of sleep at night.  One thing I know for sure about his schedule....in the mornings after he eats, he likes to play under his musical jungle gym and look at the big black box with all of the moving colors and shapes (the TV).   Here is a picture of him doing just that! 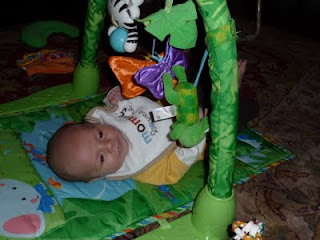