Community Group Christmas and our visit to Sugar Land, TX

Merry Christmas!!! Luke is celebrating his first Christmas in two places this year--first in Houston (specifically Sugar Land), where he will spend time with Mimi, Papa, Aunt Erica and Uncle Andy, and cousins Mitchell, Audrey and Lauren, and then in Tulsa, OK, where he will spend time with Grandma and Grandpa, and all of his aunts and uncles and cousins in Oklahoma. It has been a while since our last post, and a lot has happened since then, so we will be posting several posts today.

First, we celebrated in Austin with a little white elephant gift exchange with our Church community Group.  We had a lot of fun with everyone, and several gifts were "doozies" that I am sure will return next year.  Here are some pics from our little party:

Random Pictures from the past week--here are a few random pictures to share just because I thought they were super cute: 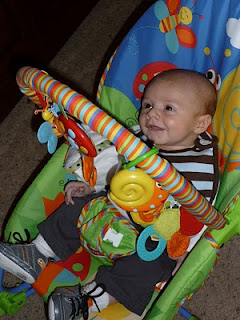 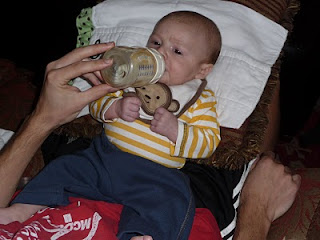 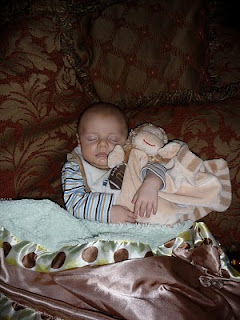 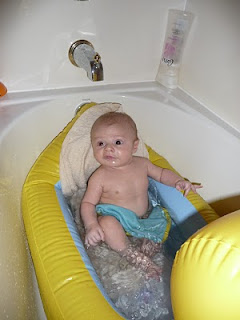 (The pic above in the blow-up bath tub is actually from our trip to Mimi & Papa's, but I had to include it in our random pics part of the post because I thought he had the cutest funny face.)

Later, we traveled to Houston and visited the Houston zoo with Drew's side of the family.  It was a blast!!  Here are some pictures, featuring Mimi & Papa, Drew, Luke & me, and Erica, Mitchell, Audrey & Lauren:

The next day, Drew & I got a treat--we got to play golf together with Drew's dad!  I thought it would be a while before I would get to play again, since we have a little one now, so it was a great treat.  Mimi watched Luke while we played.  Drew and I decided to play scramble style, since we did that last time we played together on this course.  Our goal was to shoot a 76, since last time we shot a 77.  Well, we shot a 72, so we were pretty excited.  Overall, it was a nice day--pretty windy and we got rained on pretty hard for a while, but the temperature was nice---upper 60's/low 70's.  Here are some pictures from the day: 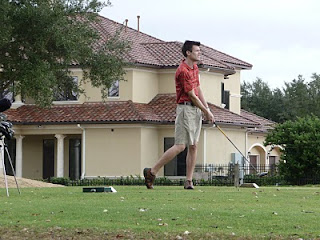 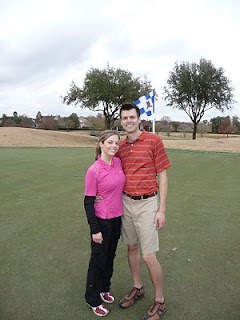 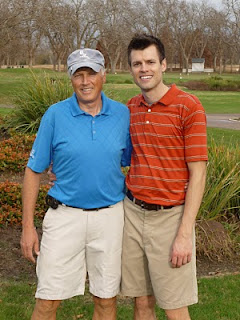 A Weekend with Mimi & Papa!

Luke was able to have some great bonding time this past weekend with Mimi and Papa as they came up to visit him and watch over him while Drew and I crossed some things off of our lists.  We did lots of shopping with them and we even got to have a date night while they watched little Luke.  For our "date night" we saw the Nutcracker ballet.  Neither Drew nor I have actually ever been to a ballet, and I have always wanted to see the Nutcracker.  We are both really glad we were able to see it, but I must say we both now can truthfully say we prefer musicals or plays and don't need to go to any more ballets.  Not that there is anything wrong with ballet--it is very beautiful--but we both decided we needed words to the story.  We had a difficult time understanding what was going on.  It was very nice though to have a "date"--we had a lot of fun.  Thanks Mimi and Papa for watching over little Luke--we really enjoyed having you all visit this weekend.  Luke also had a lot of fun and is looking forward to seeing you again soon.

Some recent milestones for Luke:


Here are some pics from this weekend: 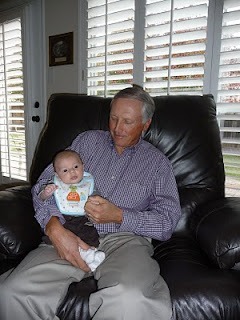 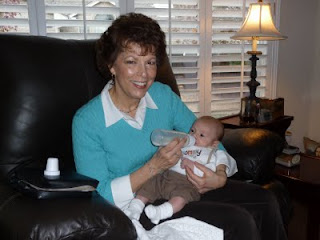 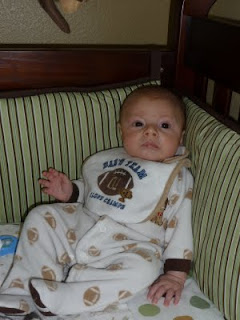 We cannot believe Luke will be 9 weeks old tomorrow.  This time has really flown by and we now know what people meant when they said "children---they grow up so fast!"  This past week I tried some new things with Luke.  We tried the Bumbo our friends, Frank and Holly let us borrow.  Their twin boys will be 1 year old in January and have grown out of the Bumbos.  Here is a picture of Luke doing his reversed Heisman pose in the Bumbo: 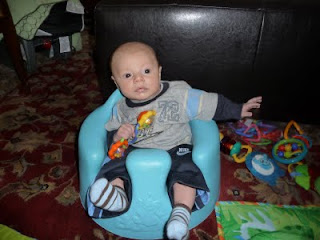 We also tried his Rainforest jumperoo--which he LOVED!  He can't touch the ground yet in it and can't reach the toys, but loved hearing the music and seeing the lights while he bounced.  I think he got the biggest kick though out of mommy making funny faces and dancing to the music.  We didn't get a picture of that.  It's funny the things you begin doing, how you begin talking and the things you will be saying for your child once you become a parent--anything to get one of those precious smiles!!

Luke has always been a very active baby.  I began feeling him kick around in the womb very early on and I knew he would be kicking when he came out as well. Well, he loves bath time and unfortunately he likes to kick around in the little tub and soak mom and dad.  We really do enjoy giving him his baths and look forward to when he can play with bath toys in the big tub--that will be so much fun. 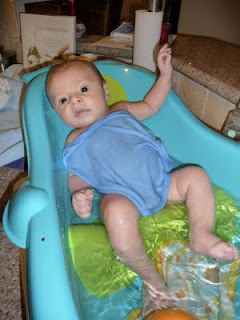 Luke enjoys sitting up and taking in the scenery.  Here I have him propped up on the couch for just a second while a snapped a quick pic. 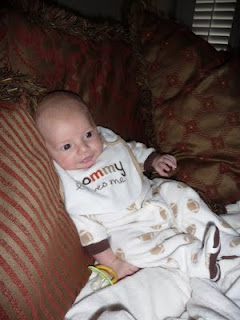 Luke is now weighing in at 11 lbs 2 ounces as of yesterday night.  Also, we took him to the doctor yesterday because we were really concerned that he doesn't seem to keep very much food down.  Also, as much as he eats, it seems he should be gaining weight even faster--he eats A LOT!!  But, he constantly spits up and actually projectile vomits after nearly every meal (he soaks about 8 bibs and burp cloths each day) and he seems to be very uncomfortable as he is spitting up.  The doctor said it is likely one of two things: Gastroesophageal reflux disease (GERD) or Pyloric Stenosis. It is most likely GERD, as it is fairly common in infants.  GERD is basically acid reflux---where stomach contents flow back up usually due to immaturity of the LES (lower esophageal sphincter) or muscle between the stomach and esophagus.  It is treated with medications like Prilosec.  The doctor doesn't believe it is pyloric stenosis because Luke is still gaining weight and is still having plenty of wet and poopy diapers.  Pyloric Stenosis is most common in firstborn males for some reason and is a narrowing of the pylorus, the lower part of the stomach through which food and other stomach contents pass to enter the small intestine. When an infant has pyloric stenosis, the muscles in the pylorus have become enlarged to the point where food is prevented from emptying out of the stomach.  Unfortunately, the treatment for this is surgery.  We all really think it is just reflux though and are hoping the medication the doctor prescribed will begin working so our little boy won't be so uncomfortable.
2 comments:

It has been a while since the last post, but a lot has happened since then.  On the Friday afternoon before Thanksgiving, I received a call that my dad was being taken to the hospital by Ambulance.  As soon as I heard that, I began calling many folks for prayer and we began making plans to get to Tulsa as soon as possible.  We were scheduled to fly out on Monday anyway, so we decided to drive first thing Saturday morning and cancel our Monday flights.  I think it was probably for the best, because I am not sure how we would have gotten all of our stuff packed into two bags and two carry-ons.  Babies require a lot of stuff! It turns out my dad had a bleeding stomach ulcer, which was attached to a Gastrointestinal Stromal Tumor (GIST).  After he was stabilized, they were able to perform surgery on Tuesday, which gave us even more time to contact as many people as possible for prayer.  Praise the Lord--my dad's surgery was extremely successful and they were able to remove the entire tumor with a portion of his stomach.  Not only that, but my dad is an extremely fast healer.  They told him the recovery time would be a minimum of 5 days but could be as much as a couple of weeks.  He was able to come home from the hospital the Saturday after Thanksgiving.  Although he spent Thanksgiving in the hospital and had to drink a pumpkin drink instead of eat pumpkin pie, there is a lot for which he and the rest of the family is thankful.  We stayed through the weekend after Thanksgiving so we were able to spend some time with him at home.  Please continue to pray for my dad--the GIST was a rare cancer and we are praying that it is completely gone, never to return and we are believing firmly on that.  However, he will begin meeting with an Oncologist soon and find out more about the cancer.  Pray that he is connected with a physician who is knowledgeable about this type of cancer and recommends the appropriate treatment.

While we were there, we were able to visit with family and meet Traber (Jeremy and Brandy's son), our newest nephew.  Here is a picture of them together in matching outfits: 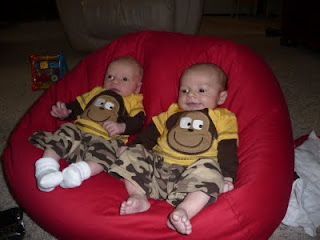 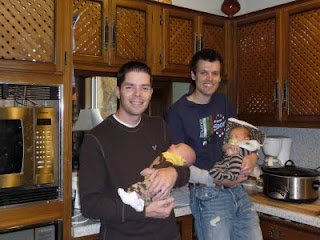 Here are the two newest dads showing off their sons. 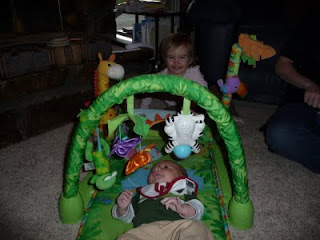 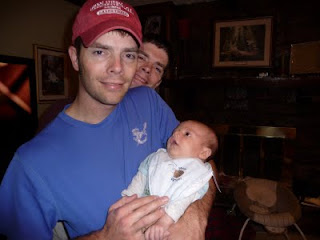 Here is my brother, Jeremy, holding Luke--my other brother, Jason, is peeking over his shoulder. 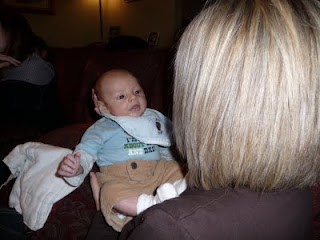 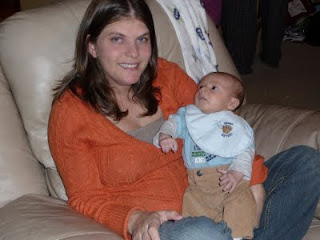 Here is the other new mom, Brandy, holding Luke.  She just delivered Traber a few weeks ago--doesn't she look great!

While we were there, Luke visited Santa.  Here are his first Santa pictures: 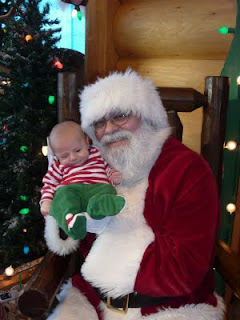 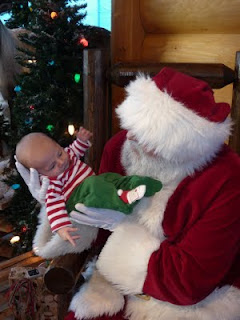 And, of course, last but certainly not least, here is a picture of my dad with his two newest grandsons.  This is something he has been looking forward to for weeks... 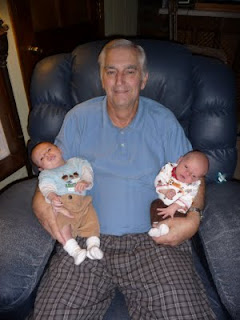 I wish we would have taken more pictures, but it was a very crazy week.  It was so good to see family though and we are SO THANKFUL my dad is recovering so well!