What a title!!!  When you wait way too long between postings, you have to combine titles!  We've been so busy, that it is just so hard to post more regularly.  We have lots of pictures to post, so I'll get started! 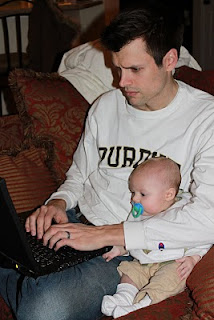 First, I just had to get a picture of this--Drew was working one night, and I had to set Luke down for a second.  So, I sat him by his Daddy, started to walk away, and realized that these two guys had the same concentrating look.  I had to grab the camera.  I took several pictures, but this one is the first I took. 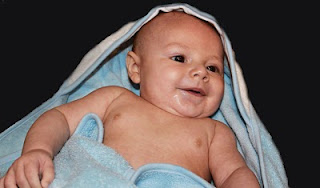 Luke just loves his bath time.  After his bath, we always wrap him up in one of his favorite fluffy hooded towels.  He was looking too cute, so I had to snap a picture. 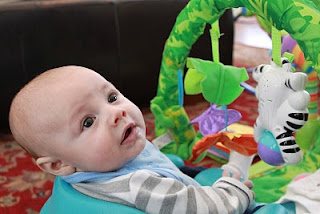 Luke loves to sit up like a big boy now.  In fact, we probably place him in his bumbo to play with his musical gym more than we place him on his back underneath it.  Any time he is in a lying position, he tries to sit up--so sitting up is definitely his preference.  Drew took this picture one day.  He is facing away from the TV, but he is so intrigued with the moving pictures on the TV that he is trying so hard to see what's on. 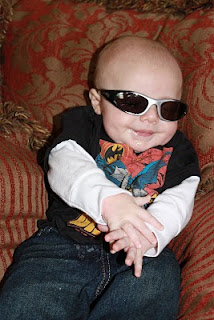 My parents came down on Friday night for the weekend (Valentine's weekend) and Drew's parents came down on Saturday night.  We started the day on Saturday with my parents at Round Rock donuts.  We've actually never been there, but have heard about these donuts.  I couldn't believe this place--you would think they were giving away money if you saw the line.   There was a HUGE line in the drive through, and a line that weaved around several times in the store and continued out the door.  The guy behind us was a true Austinite and a regular at this place.  He told us all about the 2 lb donut, which is what he ordered for himself.  He also said this place has been on the discovery channel, so it's pretty famous.  I will say, the glazed donut pretty much melted in my mouth!  Then, during the rest of the day on Saturday, we shopped 'til we dropped with my parents.  We only bought a couple of things while we were out, but it was just so nice to get out.    Because it was a beautiful day, we also took a nice, long walk.  We were able to use the sunglasses we bought for Luke while shopping.

Later, we met Drew's parents and headed to Main Street Grill in Round Rock, where Drew's parent's treated us all to dinner.  It is a really cool place for those of you who live in the Austin area and have never been there.  It is actually an old bank building--they have converted the vault into a wine-room, which has one table in it.  So, you can eat in the old vault (they still have the old vault door attached). 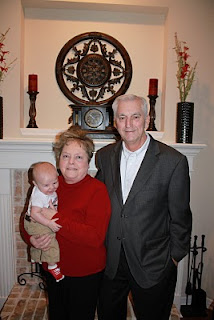 Valentine's day on Sunday was extra special, because it was the day that Luke was dedicated at church and it was spent with both sets of parents.  For Luke's life verse, we chose Luke 10:27, which says, "He answered: " 'Love the Lord your God with all your heart and with all your soul and with all your strength and with all your mind'; and, 'Love your neighbor as yourself'."  We received a parenting book, a kids' Bible for Luke and a letter to Luke from our Pastor, Matt Carter, which we will give him when he accepts Jesus Christ as his personal savior.  The letter tells Luke about this day, the love that we and the rest of the church have for him, and the prayers that are being prayed that he will someday come to know the Lord.  Once we arrived home, we took some family pictures with Luke. 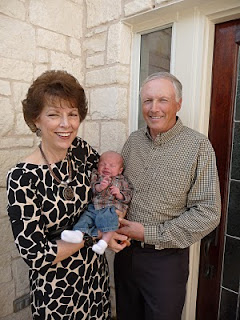 Drew's parents had to head back to Houston right after lunch, so we weren't able get pictures with them.  So, I posted a picture above of them with Luke after Luke's first trip to church when he was 6 weeks old--my how he has grown!  It is a special week for Drew's parents, as they headed to Guatemala today for a mission trip with Living Water International.  More than 884 million people lack safe drinking water; Living Water International exists to demonstrate the love of God by helping communities acquire desperately needed clean water, and to experience "living water”—the gospel of Jesus Christ.  So they will be in Guatemala sporting hard hats and digging wells!  We look forward to hearing all about their trip!

It was so nice to spend Valentine's weekend with our parents and are looking forward to seeing them again soon!