We have been VERY busy lately.  So busy that we have become delinquent on our blog posts.  Here is what we've been up to.

A couple of weekends ago, we had the pleasure of having some visitors--Drew's parents from Sugar Land, TX and his Aunt Cindy and Uncle Doug from Findlay, OH, where Drew grew up.  We had a blast with them, and did some real, Austin activities.   On Saturday afternoon after eating some sandwiches and watermelon at home, we went to the South Lake Travis Spring Fest at Hill Country Galleria.  There, they had live music, fair food, LOTS of Shopping (at the Galleria stores and there were approx. 150 arts and crafts booths) and they even had a BBQ cookoff.  With the live music and BBQ cookoff atmosphere, it was definitely a Texas-experience.  Here are some pics from that day. 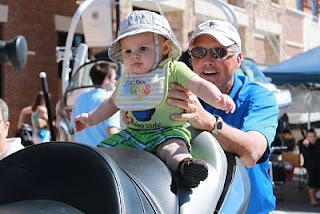 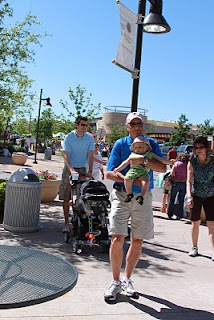 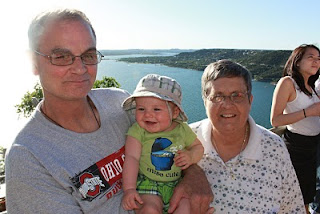 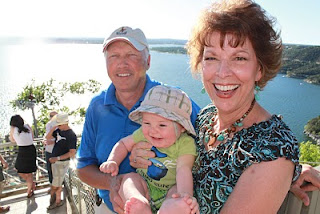 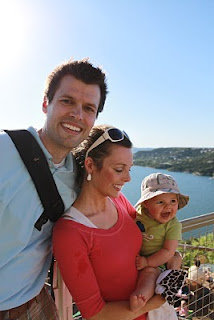 The last few pictures above are from the deck at the Oasis Restaurant.   We had some delicious fajitas on the deck overlooking a full and beautiful Lake Travis--what a wonderful day!!!

The next day, after going to church, we had lunch at the original Salt Lick restaurant in Driftwood (awesome BBQ) and then went to the LBJ Library/Museum.  If you have never been there, it is a fun, cheap thing to do (it's free).  Here are some pics of us goofing off at the museum.  This is from the part of the museum dedicated to Lady Bird Johnson: 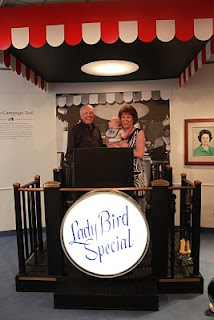 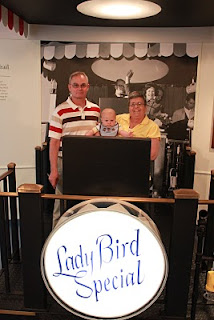 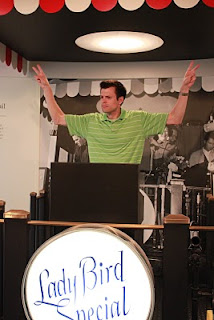 We had a great time with Mimi and Papa and Aunt Cindy and Uncle Doug and are looking forward to seeing them again soon!

Last weekend on Saturday, I went to brunch with the gals from our Church Community Group, and then Drew, Luke and I attended a BBQ cookoff in our neighborhood.  It was actually HUGE even though the competition was only in its third year.  There were contestants from all over Texas, fun amusement park rides for the kids (Luke is still too young for this, but I wish I wasn't too old for them--they looked fun to me!), and GREAT live music.  Bob Schneider, an Austin favorite even played at 4pm, but Luke had too much sun by then and we forgot the sunscreen so we had to head home before we got to see him.  We heard some other good music though and ate some BBQ.  We got a "people's choice ticket" and were able to sample BBQ from various contestants and then cast our vote.  Unfortunately, by the time we arrive to the event, a lot of the contestants ran out of food, so we were not able to sample them all (but we still got full).  It sounds like the last couple of weekends have been all about BBQ--but, that is really not the case, I promise.   BBQ just happened to be part of the atmosphere--but hey, we are in Central Texas!  Here are Drew and Luke enjoying some shade at the event. 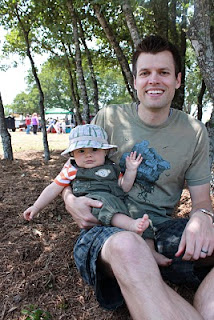 Because this post has gotten WAY too long, I am going to have to add some separate posts a little later.  Stay tuned for the Luke is SEVEN months old post!   I can't believe he is already 7 months old.  Wow, where did the time go?