So, our little guy officially has some teeth.  It seems he has been teething for several months.  I think when he was about 4-5 months old, I thought he was going to have a tooth pop through his gums very soon.  However, the drooling and putting everything in the mouth went on for a few months.  Then, a few weeks ago, I could really tell something was different.  I could also see what looked like a little tooth just below the gums.  Then, about a week or so later, another one popped through.  Poor little guy--I know that has to hurt.

Luke decided to model his new teeth for the camera.  Here is their first appearance before the internet world: 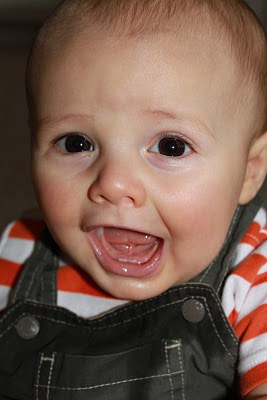