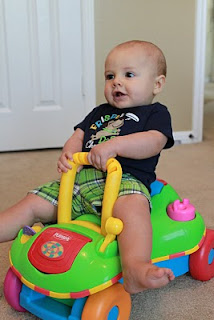 Happy 4th of July to everyone!  We have lots of reasons to celebrate today.  In addition to being thankful for our freedom as Americans, we are also celebrating Luke's 9-month birthday.

We are pleased to say he is officially a crawler now.   He has been pretty mobile prior to these crawling days; but, we were beginning to wonder if he would just go straight to walking.  He would roll over to where he wanted to pull up, and then pull up.   We have begun baby-proofing the house, as we realized that these stages are started to go by faster and faster.  Drew moved the crib down to the lower level after Luke tried to escape one morning.  We also bought some edge-protectors for our fireplace, but they don't work very well.  We're sure he'll pull those right off and, in fact, they actually seem to attract him to the fireplace.

Here is a video of Luke crawling:


With these new stages, we are finding that Luke is very similar to his mommy in that he always wants to be on the move.  He wants to be in on all of the action.  So, on Saturday, we bought a Sherpani backpack baby carrier that was advertised on craigslist so he can join us on hikes.  We also thought this would be very handy on our upcoming vacations.  We tested it out on a short hike near Lake Georgetown on Saturday. 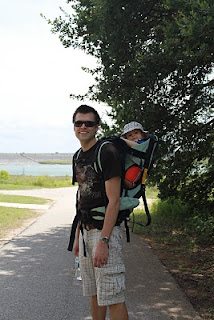 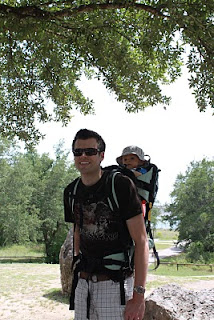 We also visited a great restaurant while we were in Georgetown, called Monument Cafe.  Everything we ate there was DELICIOUS and we will be back soon!  We even splurged for the freshly squeezed cherry limeade and the coconut cream pie--YUMMY! 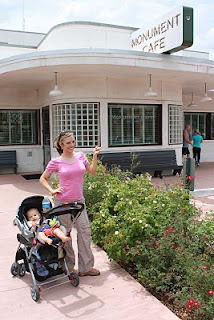