Ahhhhhhh sleep--how much do I love thee!

I was recently at an Austin Area Strategic HR Forum meeting, where we had a speaker who mentioned that getting less than 7-8 hours of sleep per night will affect your IQ.  She said the first thing that you should tell an employee whose productivity has dropped is to get more sleep!

So, this prompted me to do a little more research of my own.  Personally, I have come to really LOVE and cherish my sleep.  I think this feeling has grown since the birth of Luke--probably due to the fact that I got none shortly after he was born.  There were days during those first couple of months after he was born that I felt like a zombie.  What was really scary were the days that, although they were filled with lots of activity, at the end of the day I could not even tell Drew what had occurred.  The whole day was a blur.  So, when Luke began sleeping through the night, I began to appreciate sleep significantly more than I had prior to his birth.  I began to crave it throughout my day.  I know there HAS to be something to this research.

Here are some of the interesting facts that I have found.  (info. from http://www.helpguide.org/life/sleeping.htm)

Just as exercise and nutrition are essential for optimal health and happiness, so is sleep. The quality of your sleep directly affects the quality of your waking life, including your mental sharpness, productivity, emotional balance, creativity, physical vitality, and even your weight. Lack of sleep affects your judgment, coordination, and reaction times. In fact, sleep deprivation can affect you just as much as being drunk.  No other activity delivers so many benefits with so little effort as sleep!

Sleep isn’t merely a time when your body and brain shut off. While you rest, your brain stays busy, overseeing a wide variety of biological maintenance tasks that keep you running in top condition and prepare you for the day ahead. Without enough hours of restorative sleep, you’re like a car in need of an oil change. You won’t be able to work, learn, create, and communicate at a level even close to your true potential. Regularly skimp on “service” and you’re headed for a major mental and physical breakdown.

The good news is that you don’t have to choose between health and productivity. As you start getting the sleep you need, your energy and efficiency will go up. In fact, you’re likely to find that you actually get more done during the day than when you were skimping on shuteye.

How many hours of sleep do you need?

According to the National Institutes of Health, the average adult sleeps less than 7 hours per night. In today’s fast-paced society, 6 or 7 hours of sleep may sound pretty good. In reality, it’s a recipe for chronic sleep deprivation.
While sleep requirements vary slightly from person to person, most healthy adults need between 7.5 to 9 hours of sleep per night to function at their best. Children and teens need even more (see chart at left). And despite the notion that sleep needs decrease with age, older people still need at least 7.5 to 8 hours of sleep. Since older adults often have trouble sleeping this long at night, daytime naps can  help fill in the gap.

In my research, I also found a new study undertaken by researchers in the UK and Italy that suggested that an abnormal sleeping pattern may result in an increased risk of premature death. (http://www.psfk.com/2010/05/the-importance-of-sleep.html). The research took data from studies across Europe, the US and Asia over 25 years, covering more than a million people and over 100,000 deaths. There were two key findings from the research as reported by The Guardian.


It found that those who generally slept for less than six hours a night were 12% more likely to experience a premature death over a period of 25 years than those who consistently got six to eight hours’ sleep.

It also concluded that those who consistently sleep more than nine hours a night can be more likely to die early. Oversleeping itself is not seen as a risk but as a potential indicator of underlying ailments.

So, the moral of the story?  I won't bore you with any more of the many research studies that demonstrate the importance of sleep.  However, I would ask that you share this information with your loved ones who do not get enough sleep! It is critical for their success in their jobs, for their health/survival, and for them to be able to spend quality time with their families.  I know that I am going to make sure I get enough! 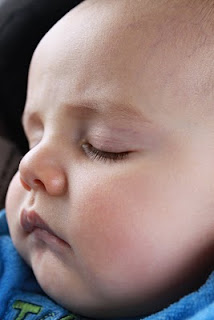 We have been working with Luke since he was about 5 months old on baby sign language.  Obviously, the purpose of using sign language with your baby is to be able to communicate better with them before they are able to verbalize.  Research also shows that babies that do baby sign language get a great start in life – with bigger vocabularies and more advanced cognitive skills even years after they have stopped signing.

Some of the signs we have been working with Luke on is "more," "all done," "eat," "milk," "hello," and "goodbye."  Again, the purpose of using sign language is so that Luke can communicate to us his needs, desires, etc.

Well, I guess it doesn't really matter what the sign is, as long as it is something we understand, right? 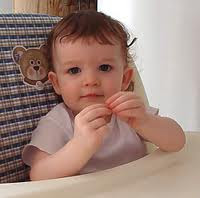 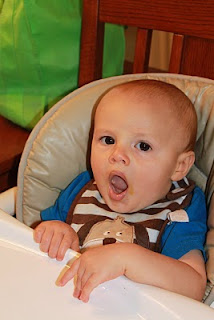 My brother, Jeremy, sister-in-law, Brandy and nephew, Traber, came down for a visit last weekend.  We had a great time together, and the boys, Luke and Traber, provided some great entertainment for us as we watched them interact.  While they were visiting, we took a trip to San Antonio and joined thousands of IBM employees and their families for "friends and family day" at IBM. Drew works at IBM and got a great discount ($27) for admission into the park, parking (which normally costs $15), a buffet meal, and even free admission for another time this season.   What a deal!  The only problem with this is that thousands of others also took advantage of this deal.   Regardless, we had a great time there!  The boys were troopers--we were there when the park opened at 10am, and stayed until 8pm. 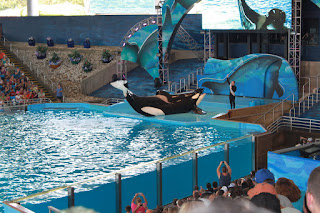 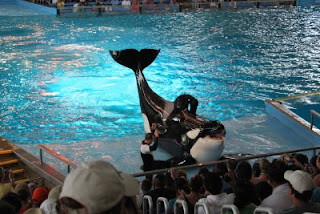 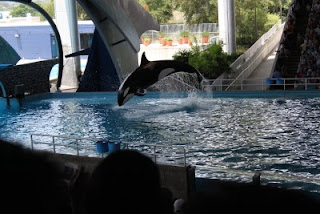 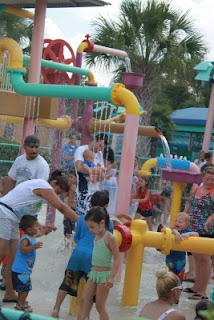 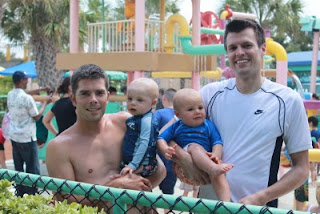 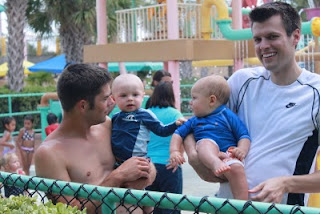 Luke wasn't so sure about the splash park in Sea World... Here, Traber tries to comfort Luke.
Here, Drew and Jeremy race down the waterslides in the water park at Sea World... 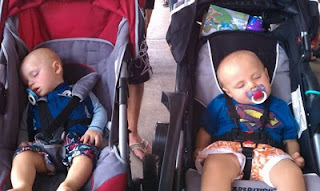 The boys had fun, but were all tuckered out after the long, very hot day at Sea World.
While Jeremy and Brandy were here, we also hung out at our house, and did some fun stuff around Austin.  It was fun watching the boys interact, since they are so close in age.  The Bob Bullock Museum (Texas State History Museum) has a free admission day on the first Saturday of the month, so we thought that would be a good opportunity to check it out.  Being a State History museum, it was not too exciting for the little ones, so they created their own fun.  Here, they decided to have some pacifier tug of war: 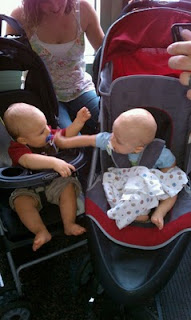 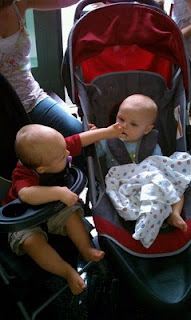 We also did a little shopping.  Ikea is always a fun place to shop: 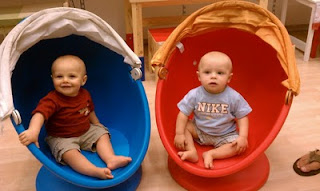 We also did a little swimming at our neighborhood pool... 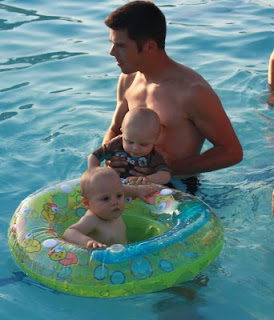 It's Been A While--well, at least in baby time!

Although I believe it has only been a couple of weeks since our last post, a LOT has happened around our household.  I am really starting to learn that baby-time goes by more than twice as fast as adult time.  One day, Luke is a rolly-polly, the next day he is a crawler, and then, LITERALLY, the next day he is pulling up and then cruising around the furniture!  So now, I wish time would slow down just a little bit--my baby is turning into a little boy!!!

I am finding that he is either in an explorer stage that nearly every baby goes through, or HE IS AN EXPLORER for good.  I am pretty sure he may follow his daddy and become an engineer someday.  He likes to really study things, like he is trying to figure out how they work.  Of course, he is also attracted to everything that he is not supposed to touch or play with! Here's an example...  Luke has learned a new speed of crawling....I'm calling it Luke's hyper-crawl speed.  He is very cunning, in that when he decides to pursue something he is not supposed to, he uses great skill and tactic.  He first lures us away by getting us to follow him in some other direction.  Then, he turns around very quickly and makes a bee-line towards the object he is not supposed to be around.  We are going to have to take some video of this, because it is hilarious.  Lately, he has been fascinated with plugs and outlets.  He wants to pull the outlet covers out and would love to stick his little fingers into the outlets without covers--not good.  Why can't he be more interested in blocks, or something that is safe?  He also really wants to go DOWN the stairs.  When playing upstairs, he often distracts us while playing so he can move into hyper-crawl mode to go towards the stairs.   And, he is so fast, that, although we were playing right beside him, we barely grabbed him in time before he went down the stairs.  Scary stuff.

What else is he up to?


Our little boy has 5 teeth and an additional one that is peeking out of the gumline and will probably be completely out within a couple of days.  So, another one of his pastimes is chewing on anything he can put in his mouth.  I discovered today that this includes his bed.  Drew normally goes upstairs and gets him around 5:30am when he wants to eat and then I feed him.  So, it is dark when he picks him up during those wee hours and he hasn't noticed the bite marks that Luke must have recently put on the bed.  Luke must have secretly gotten up in the middle of the night and done this (and recently), because we have a video monitor and didn't notice.

Other than keeping VERY busy with Luke and with work for both of us, we also had the pleasure of having visits from family the past two weeks.  We love any opportunity that we get to have visitors to our house--especially family.

Two weekends ago, my parents visited us.  We had lots of fun with them, both running around town and just hanging out at the house.  Here are some pics: 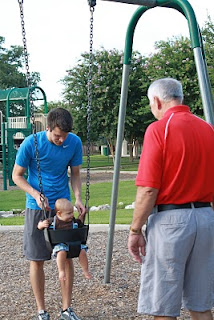 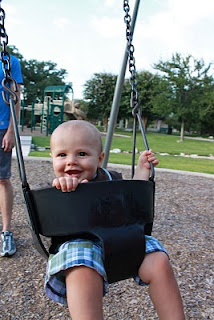 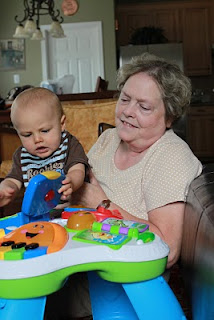 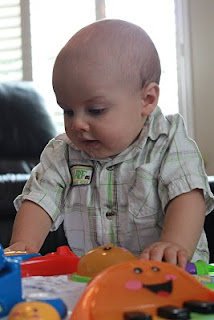 Then, this past weekend, Drew's parents came for a visit.  We had lots of fun with them as well.  We did some shopping, eating out, and also just hung out at home as Luke entertained us.  Here is a great pic of them on Sunday before they headed back to Sugar Land.