I know---strange title for a blog entry, right? Well, there is a good explanation for it, believe me.

Last weekend, while most everyone else in Austin was watching the UT game on TV or Live at the stadium, we decided to attend the Brushy Creek Hairy Man Festival near where we live. This year was actually the 16th year that the festival has been in existence.  Last year, shortly after we moved into our new house, I began hearing about this festival and seeing advertisements for it.  I was very anxious to go and Drew and I actually made plans to go.  However, Luke had another idea--he decided it was time to see the world--maybe he wanted to go too?

So, my water broke that afternoon and the rest is history.  This year, I decided we would not miss it.  So, what is this Hairy Man Festival about, and why in the WORLD would we want to go to a Festival about a Hairy Man???

The road that we live near, Brushy Creek Road, turns into "Hairy Man Road" near our house.  There is actually a legend of a strange hermit, the Hairy Man, "who haunts the winding road along the Brushy Creek. Many legends persist about the Hairy Man. Some believe he was an infant accidentally left behind by settlers heading west in the 1800s. Raised by wild animals in the fern bluffs, the Hairy Man viewed the creek as his own. He resented the intrusion of strangers into his territory and would jump out of the trees to frighten people away. Or, hanging from the leafy canopy above the road, he would drag his feet across the top of passing carriages. On one occasion, the Hairy Man attacked a horse-drawn wagon, spooking the horses. The old hermit was supposedly run over by the wagon and killed, and now his spirit lingers along the creek and road."

So, where else would you create a festival named after this Hairy Man, but in the Austin area, right?  We already have a Spam Fest, and a city-wide celebration of Eeyore's birthday--why not add a Hairy Man celebration to the mix.  The festival was like a small community fair, with pony rides, a petting zoo area, amusement park-type rides and bouncy castles, some arts and crafts booth, and fair-type food.  Here are some pictures of us enjoying the afternoon there. 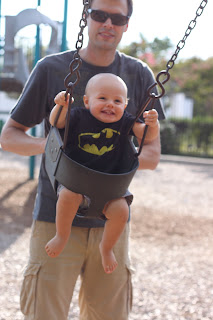 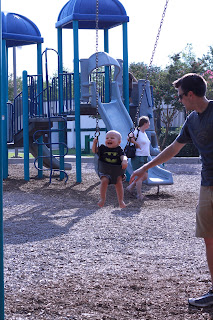 Luke likes his new shoes.  But, Drew had to keep hold of Luke's hands, because he kept trying to squat down to take them off.  His poor little feet are so fat, that they don't fit into shoes well at all. 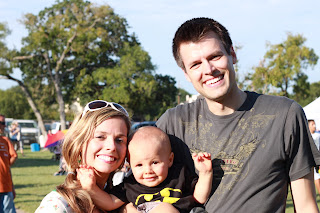 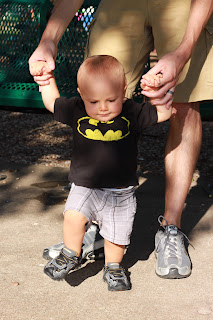 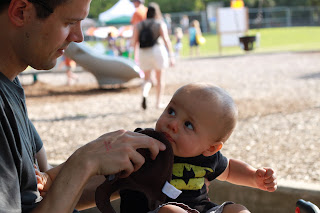 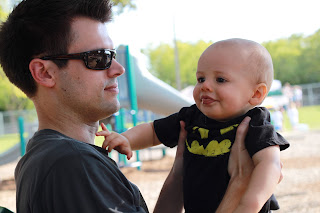 I like this picture above.  It looks like Luke is saying, "thanks man for taking care of that drool for me." 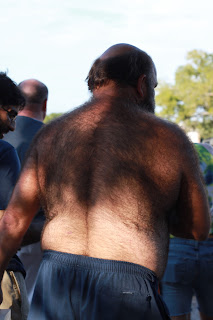 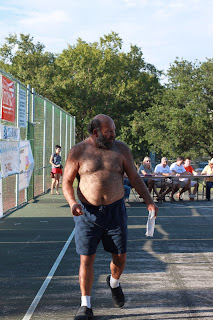 So, this is the guy that I thought should take home the $500 prize and title as the Hairiest Man.  He actually has won in the past.  But, apparently, the judges did not agree that he should hold this year's title.  I'm sorry for posting this, but I know some of you all want to see a Hairy man. 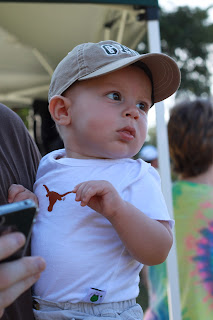 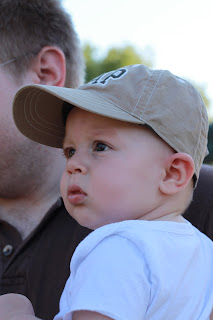 Here is Luke's friend, Ford, taking a look at the hairy men.
And here are Sarah and Ford catching a glimpse of the Hairy Man who competed in the contest. 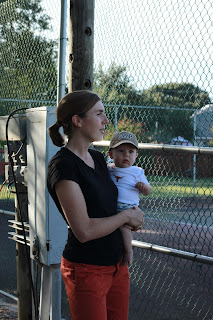 Ever since the festival, Luke has been waking up in the middle of the night (nightly), usually at 2am or 4am, sometimes at both times.  I'm not sure if this is due to him teething or going through a growth or development spurt.  But, part of me wonders if he is having nightmares about the hairy men.  I guess it was pretty frightening.