So, why are certain things innate? Why do boys know to play with certain boy toys, like cars, balls, dirt, etc.  I think it is so funny that Luke enjoys all of the things most other little boys enjoy.   So, I did a little research on the subject, and have pasted and referenced some information below the cute pics of Luke for those of you who are interested.

But, back to our Luke.  For example, he loves playing with cars.  In fact, he pretends a lot of things are cars and pushes them around on the ground and makes car noises.  He also enjoys taking whatever you have stacked so neatly and making it crumble very dramatically.  He loves opening up the kitchen cabinets to pull out the pots and bang on them with a spatula.  He loves to play with balls as well.   Lately, his obsession is to bring a ball to the edge of the top of the stairs and push it down the stairs.  He sits there until the ball stops rolling on the bottom floor, goes and gets another ball and then repeats the activity.

Lastly, he enjoys his books and reading them.  But, he REALLY likes to pull them all off of the shelves.

Here are some pictures of our little boy being a boy. 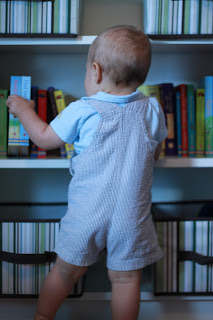 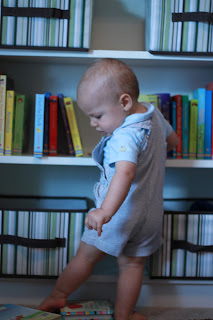 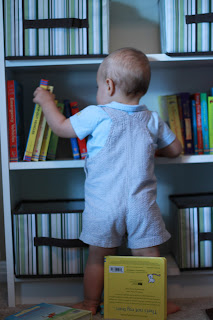 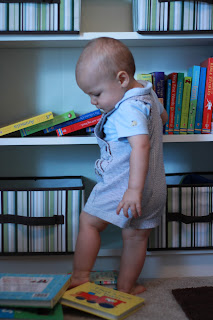 Another one of his pastimes.  Clicking buttons on the Hepa Air filter machine in his room.  He likes to turn it on.  If you turn it off, even if he is 10 feet away, he ALWAYS notices and will go rapidly back to the machine and turn it back on.  He also gives you the stare-down, as if he's asking you why you touched it. 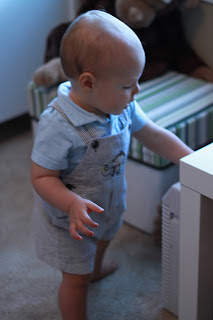 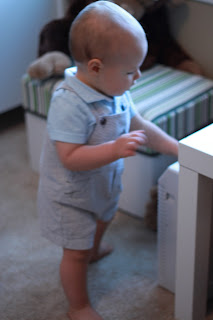 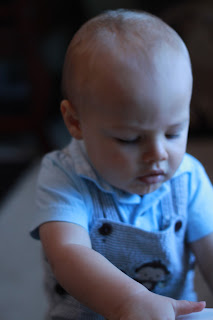 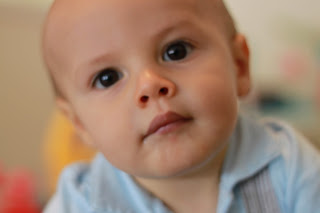 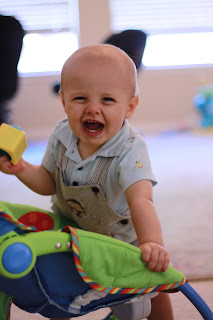 Here is some interesting information that I found on a science blog:

Psychologists have wondered for decades whether boys preferred "boy toys" because of a natural inclination to like hard, mechanically-oriented things, or simply because those around them encouraged them to play with the toys they felt were appropriate for boys. Similarly, do girls "naturally" like to play with dolls, or are they encouraged to do so by their parents? While researchers have found that kids around 18 months and older do prefer the traditional gender-specific toys, research for younger kids (presumably less-influenced by their parents) is less clear-cut.

A 2000 study showed babies between 3 and 18 months old pictures of toys traditionally preferred by each gender and measured how long boys and girls looked at the pictures. The boys as young as 9 months old seemed to prefer toys like balls, blocks, and cars to dolls, dustpans, and ovens. However, even the 18-month-old girls showed no apparent preference for any type of toy based on how long they looked at them.

New technology allows researchers to record the precise eye movements of infants, and a team led by Gerianne Alexander designed a simple study to see if 6-month-olds really showed sex differences in toy preference. Thirty babies were placed in a car seat in front of a small puppet stage, whose curtain was opened for ten seconds to reveal two toys: a pink doll and a blue truck. The curtain was lowered, the position of the toys was switched, and it was raised again for another ten seconds, so each toy was seen in each spot for the same amount of time. Then the number of looks at each toy was carefully tallied by gender. Here are the results:

While both boys and girls fixated more on the doll than the truck, girls looked at the doll significantly more than the boys did, and looked at the truck significantly less than the boys. The researchers say babies this young don't have the motor skills to actually play with these toys, so the result must be due to different visual preferences in boys and girls. Arguably, babies at this age don't have any opinion about gender roles and don't even particularly distinguish between genders, so social influences must not be responsible for this difference.

Also, for further reading, here is a link to an article on a book about the differences between boys and girls: