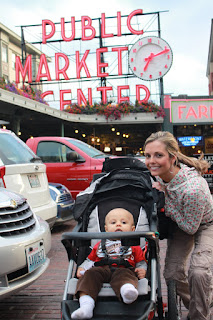 Drew, Luke and I decided to take our first long family vacation together to a place far away--Seattle.  We have had so many questions from friends asking us why we chose to go to Seattle.  So many people ask us, "Do you have family there?"  Well, we actually purchased two airline tickets last year on September 1 for Thanksgiving to go to Tulsa, but we ended up canceling the flights so that we could drive up instead.  This meant that we had a credit on Southwest that we had to use before September 1, 2010.  So, Drew and I discussed going somewhere cooler, to vacate the blazing, Texas heat.  We landed on San Francisco, San Diego or Seattle as our choices (after a review of weather.com).  We eventually chose Seattle as neither one of us had been before.

We were very glad we chose Seattle.  The weather was AWESOME!  Highs were in the upper 60's every day, with just a few clouds, a light breeze and lots of sunshine.  We stayed downtown, near the market, and we didn't even need to rent a car.   We did TONS of walking, and used public transportation when we needed to travel far.

Luke was a perfect traveler.  Since the flights were not full, Southwest allowed us to bring our car seat onboard.  Our family took up an entire row, and Luke slept through the flights to and from Seattle.  We were on the go nonstop once we arrived in Seattle, and Luke just went with the flow.

We had a wonderful time there and thought we'd share some of our pictures with our readers.  There were too many to post here, so here is a slideshow of the photos from picasaweb: