It has been so much fun this year with Luke, watching him experience so many new things and this Christmas season is no different.  We're anxious to start new traditions with him.  Our neighborhood association hosts a "Breakfast with Santa" each year that is really neat for the kiddos.  Not only do we get to see Santa, but we get to eat breakfast with him.

Before Santa arrived, we checked out the beautiful decorations and Luke enjoyed mingling with some other kids. 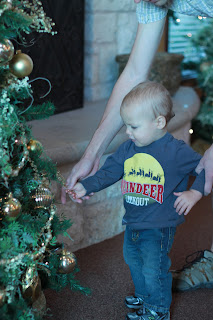 When Santa arrived at our Community Center, Luke was coloring and was caught off guard.  We have shown him Santa a few times, and he is very interested in seeing him---from afar that is. 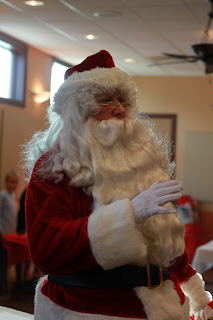 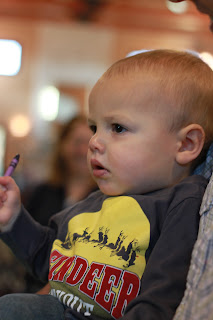 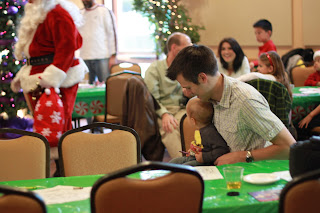 Luke wasn't so sure about Santa coming right up to him and singing "Santa Claus is Coming to Town."  But, we decided to take it a step further and sit on his lap.   We should have known how this would end up, but everyone tells us we need to get one of those classic pictures.

So, here we go.  First, the family in front of us actually asked Santa to get up out of his chair and stand behind them, while they sat in his chair.  I thought that was pretty bold, and wasn't about to ask Santa to do that.  But, I did ask him if I could sit on his lap, with Luke in mine, hoping Luke wouldn't notice and we could snap a picture.  Because Luke hadn't seemed too upset yet, I went ahead and put him directly into Santa's lap.

Here, it looks like Luke is happy---but, actually, the nice lady who snapped the picture did so quickly enough to get him in his beginning crying stages.  I'll take it. 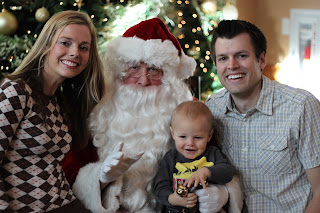 Then, I picked Luke up, hoping to console him and get Drew to snap of quick picture of Luke on Santa's lap by himself.  It didn't happen---but I did get this. 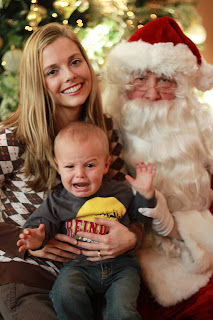 After the event (Breakfast with Santa) every year, Santa goes around the entire neighborhood aboard a firetruck, yelling "Merry Christmas" to all the kids.  He also throws out some candy and the firefighters sound their sirens.  It is so much fun to watch all of the kids try to chase down the fire truck. 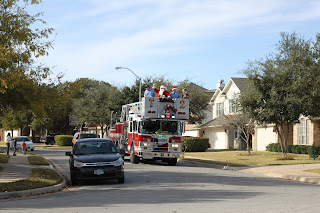 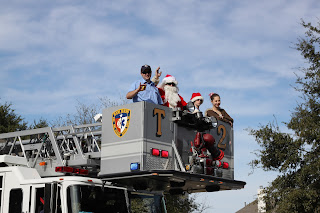 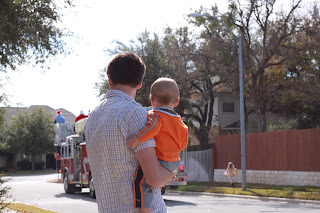 Of course, we also want Luke to understand the true meaning of Christmas.  When he gets a little older, we plan on beginning even more important traditions involving Luke.  These traditions will evolve around giving back to others, just as God sent us the greatest gift of all--his son Jesus Christ.  For now, we have been trying to teach him the Christmas story using the Little People Christmas Nativity that his Grandma and Grandpa bought for him last year.  The other day, we lost Joseph and Drew was looking through the toy chest saying, "Joseph, where are you?"  It was so cute to then watch Luke dunk himself into the big toy chest saying, "Joseph....Joseph?"