Our Poor Baby got a big Boo-Boo! (AKA the Longest Post Ever, or as Drew calls it, "The Novel")

One of the worst days of my life began early in the evening on 1/10/11. Prior to this time on this day, Luke was being his normal energizer-bunny-like self.   Luke doesn't walk anywhere--he runs.  It's almost like he is doing time trials with himself on how fast he can get from one point to another.  And, when you turn your back for a second, you can often hear little pitter patters of his feet running to do something he is not supposed to do.  Not only that, but every object is something that Luke feels he needs to climb atop.   This even includes little books on the ground--he has to step on top of them--almost like he is playing king of the mountain.

Well, 1/10/11 was no different.  On this day, he had just discovered how to climb on top of a chair that we have in our living room.  The chair is very simple--see as pictured here.  I was monitoring his every move as he climbed on top of the chair.  Unfortunately, he also wanted to stand on top of the chair cushion once he got on top.  Of course, I told him, "No" and I helped him down.   Well, let me preface the rest of this story by saying that until 1/10/11, our living room was considered a "toddler safe zone".  I have the brick fireplace covered by ottomans, and I never leave Luke unattended.  Our house is a very open floor plan, where the kitchen is open to the living room.  The only obstruction of the view to the living room is a beam between it and our kitchen--the chair is on the other side of this beam.  Luke was happily playing in the living room with his toys, and he seemed thirsty, so I went into the kitchen to put his sippy cup together and get some water for him.  I was gone for literally 30 seconds, during which time my eyes were not on him, as I was behind the beam putting his cup together.  During this time, the terrible thing happened.  Luke must have run over to the chair, stood on top of the cushion and fell over the right side arm, because I heard him fall and begin a cry like I had never heard.  It was not a loud cry, like he has when he is upset.  It was the first real "hurt" cry that I have ever heard.  Luke was laying face flat next to the chair.  Next, I felt like I was directed (I'm sure by the Holy Spirit) to pull Luke's sleeves up.  When I did, I saw something awful--his right forearm looked bent.

I got our stuff together quickly, loaded him carefully into the carseat and drove to the Hospital (which, fortunately is only about a mile away).  Frantically, after parking in the wrong lot at the hospital, I ran with Luke in my arms what seemed like miles to the ER and demanded to see a doctor right away.  The triage nurse was very calm and acted like it was no big deal.  I said to her, "to me, it looks like his arm is broken--could there be internal bleeding?"  She gave me a look like I was crazy, and then I noticed that she was spending more time trying to calm me down than caring for Luke.  That's when I realized I must have been acting pretty anxious.  I also know that children feed off of our fears, so I tried to be a trooper for Luke.  It was so hard--it was seeming like the fall was hurting me more than it was hurting Luke!  It was strange to me that Luke was barely even making a peep (no cries), unless a health care practitioner walked into the room.  I asked the Doctor if it was normal that he was not crying.  He said everything was fine, and after doing the Xray, explained that Luke did, in fact, break his arm.  However, the bones were still aligned fine and he would heal up in no time.  He said this was not an uncommon break, and that toddlers are making new bone every day anyway.  They put him in what they called a "soft cast" to allow for more swelling, and a sling and sent us home.

When we arrived home, Luke headed straight for that stupid yellow chair and tried to climb on top of it with his new cast!   I couldn't believe it.  Of course, he did this right after my mom had tried to encourage me over the phone by saying, "At least he only had a broken arm--maybe he will be more careful now and learn from this accident."  Needless to say, the chair is no longer located in our safe living room.

A week later, we visited an Orthopedic Physician, who reviewed the X-ray, confirmed Luke would be healed very quickly, and fitted him for a new cast.  He will need to be in it for only three weeks.  We picked out purple as the color. 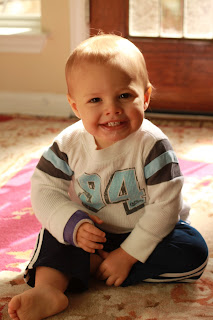 I have just felt so guilty about it since it happened, and now constantly ask God for guidance in caring for Luke.  Thoughts constantly ran through my head for several days revolving around what I could have done differently to prevent this.  If only I would have carried him into the kitchen while I got him some water!  I don't want to take my eyes off of him for a second, but have realized this is really impossible.  I already felt like I was what many would call an overprotective mom before, still even cutting his food in tiny little bites so he doesn't choke.  But now, I really began feeling the need to be overprotective.  Over the past couple of weeks though, God has helped me understand that I am really not in control of things--He is.  Although it is my job to care for Luke to the best of my ability, I can't possibly control everything that Luke does and what happens in his surroundings.  I need to give up the control to God and continually ask Him for guidance, peace and wisdom.  Although I do notice judgmental looks every now and then when people see me out and about with Luke and his cast, I know that Luke couldn't have a mom that loves him more than I do.  Loving him as much as I do can only result in the best care possible.  I am going to learn from every experience with Luke and do the best of my ability in caring for my little guy.

So, enough about me and my experience through all of this--I bet you are wondering, "How is Luke?"  Well, Luke doesn't act any different than he did before.  He is the same sweet, healthy, energetic little guy!  The cast really hasn't held him back at all.  Here are some recent pictures of Luke: