One word can be used to describe day 3's meal by Drew:   Onions.

When we first started dating, I learned one thing about Drew pretty quickly--he hated onions.  In fact, the first day that I met his parents, we went to lunch at North by Northwest (a local restaurant).  Drew and his parents all ordered dishes that came with onions and made sure the waiter knew they wanted the chef to hold the onions.  In fact, I remember them saying it again after he repeated our order back to us before delivering it to the kitchen, and right before they ordered onion rings.  I found this so ironically funny--hold the onions on our entrees, but we'd like some onion rings please.  :-)  However, over time, I think Drew has realized that onions really do have a place in a meal.  I learned that he actually enjoys them when they are cooked in a dish.  Cooking them makes them deliciously sweet.  Onions are to Drew as mushrooms are to Heather.

Well, this dish called for 1/2 onion, finely chopped (and cooked), but 6 scallions, thinly sliced (and uncooked).  I have to admit, I was leery of putting 6 scallions in the dish-it seemed like a lot.  But, I made the recipe as it was listed, except we added some heated, crumbled, dry coppa in it (I know it's strange, but we had that in the fridge). 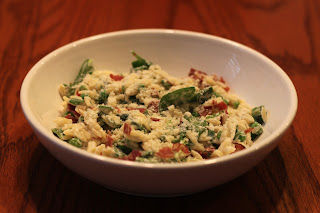 In preparing today's meal, I discovered something else wonderful about these weekly meal planners.  Rachael provides tips along the way to cut back on preparation time.  For example, the tip for today was to save 10 minutes on another dish later in the week by cooking the orzo pasta for today's dish and that day's dish all at once.  Just put the other day's cooked orzo pasta in a container and you're ready to go.  We did this---10 minutes saved on our next meal!


And, now for the verdict:

Heather:  I would rate this dish a 6 as it was prepared.  I am willing to try it again, except this time I would eliminate 4 or 5 of the scallions.  Luke and I actually cleaned our very full bowls of this dish.

Drew:  Onions.  They were a bit overwhelming, taking over my taste buds; therefore, I rate this a 4.  I think this dish could be a 7 without all of the scallions.  I'm definitely willing to try it again.

(A little note about our rating scales (1-10):  Drew says a "5" is an average dish.  A dish is rated a 7 if it is really good in Drew's rating scale.  9's are extremely exclusive--Drew rates his favorite dish (cheesy chicken roll-ups) a 9.   I'm not really sure what would warrant a 10.  At times, I have said Drew is somewhat pessimistic---he always responds, "No, I'm a realist."  He calls me an optimist.  Perhaps that tells you something about how we rate things.)

We actually ended up eating leftovers on the evening of Day 4, because we had quite a bit left from Day 3 and we both already had lunch plans on Day 4 (we don't like to be wasteful).  I spent a lot of time trying to pull some of the green onions out of the dish for Drew.  There were WAY too many though.  He did, however, get a dish on this day 4 with fewer green onions, and he cleaned his bowl.