Luke is going to be a Big Brother!

I have been anxiously waiting for some time now to create this post! We are excited to announce that Luke is going to be a big brother. Today I am 14 weeks pregnant, which means I am in the 2nd trimester. I think time has flown by much more quickly this pregnancy!

We found out in early May that we were expecting, so we decided to tell our parents on Mother's Day the exciting news. We were very excited, but more than anything we wanted their prayers, due to some complications I was having.

Luke announced it via the web, as he delivered a handmade card to Mimi via email and as he showed Grandma his handmade card via Skype. This is how he made the announcement: 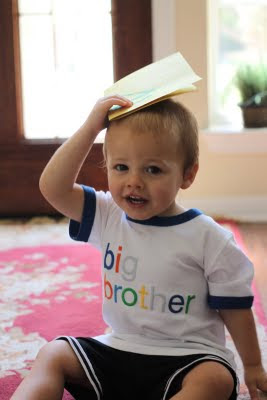 We later announced it to my immediate family members when they visited us, then our church community group (again for prayers) and then some of our extended family on my side just a couple of weekends ago when we saw them in person.   We decided to wait until we were finished with our first trimester to announce it to our close friends and the rest of our extended family, which is the purpose of this post.  :-)

I think a lot of times I am still in disbelief that I am actually pregnant--but then morning sickness which has not yet subsided reminds me of the miracle inside.  And, by the way, I have really come to understand this pregnancy that "morning" sickness is a major misnomer--it has been all day/night sickness.  I had some pretty bad morning sickness with Luke, but this is much different.  Hopefully this subsides soon though.  Unfortunately, at 14 weeks my weight is still lower than when this pregnancy started.  The all-day nausea has really started to subside, so now I am just waiting for the other part of the morning sickness to subside.  :-)

The expected arrival of our little one will be approximately 1/11/12.  Luke was actually a week early, so we could have a New Year's Baby.   To be honest, I wouldn't mind if the baby arrived in 2011, since we have already met the deductible of our very high deductible health plan this year.  :-)  But whatever God has planned for this little one, whether it be its arrival date, its sex, or any other details, we look forward to!