Our Visit to Inner Space Cavern

Drew and I had a wonderful idea a couple of Saturdays ago.  I had purchased a great deal on two half price admissions to Inner Space Cavern in Georgetown, TX a few months ago and it was our final weekend to use it.  With as busy as we have been, it was also pretty much the only weekend we had to use it.  We thought Luke would really enjoy it, since one of his favorite things is rocks.   There were plenty of rocks here!

The tour began with a ride on the cable car down into the cave.  We sat in the front of the cable car and told Luke we were riding a train (his favorite thing), so he was super excited about it.  He had a lot of fun riding that, and continued to enjoy himself for about 5 minutes into the tour.

We brought our backpack carrier so that Luke could enjoy the tour in the safest way possible.  Also, we thought if he got tired, he could nap on Drew's back.  Well, I guess we really didn't think this out very well.   I will take the blame, since I have been very persistent on wanting to visit this cave for years now.  I didn't really think about the tour being an hour and a half long, in the dark, where Luke could not touch anything and had to be quiet (so all of the guests could hear the tour guide).  Poor Luke did not enjoy himself.   He kept pointing back to the beginning of the tour and saying, "Train!   Train!".  The poor guy whined the entire rest of the tour (poor guests). But, nonetheless, the cave was truly beautiful!  I snapped a few pictures. 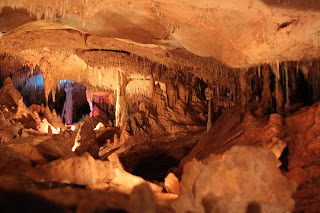 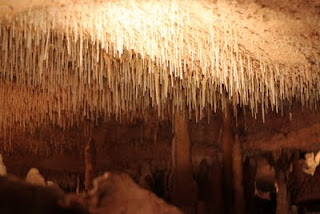 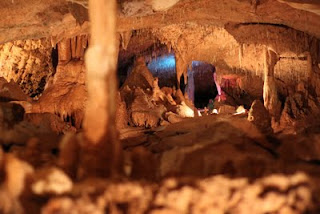 Luke was very happy when we found the train again and rode back up out of the cave.  He found the playground right afterward, and had lots of fun going down the slide.   He also found some nearby goats, including an adorable baby goat! 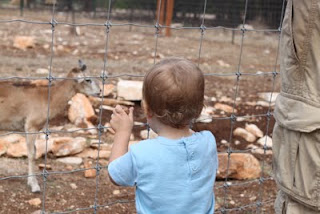 Our review of the cave:  a great adventure for a family--beautiful, fun, great temperature year-round.  Just not a good idea for an energetic, talkative toddler.  :-)   We will probably visit again when Luke is older, as he will probably really enjoy it then.