What a Great and Easy-to-Make Snack: Peanut Butter Puffs!

I never have time to read through magazines.   But, since I basically got a free subscription through a deals site, a ordered a subscription for Parents Magazine several months ago.  Just as I expected would happen, as the issues would come in the mail, they would be set aside in my "Not too urgent but don't want to throw away" mail pile.  This pile got a little too large, so I took some time on Saturday during Luke's naptime to go through it.  I went through about 5 magazines, and actually found some very interesting articles.  Before throwing the magazines away, I ripped out some recipes that looked good.

One recipe I found was the recipe I am about to share:  Peanut Butter Puffs.  I found it in the June 2011 issue of Parenting Magazine, but it is actually a no-bake recipe from Lisa Atwood's new Cookbook for Kids ($13.97; amazon.com ).  The recipe combines the idea of a healthy snack that also satisfies the sweet tooth.   What is even better is that I had all of the ingredients in my pantry and it took about 5 minutes to make (no baking).

This recipe is not just great for kids.  I thoroughly enjoyed it.  So, I must say that it is a PERFECT snack for pregnant women.  It provides me some protein via the peanut butter, a few vitamins via the cereal, and is, of course, preservative free.  This snack would also be great for those on gluten free or vegan diets! 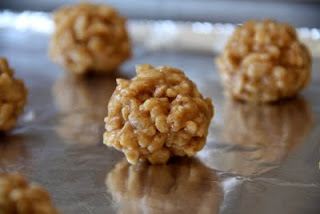 One downside of this recipe:  it says it makes 20 puffs, but my batch only made 14.  I would definitely recommend doubling the recipe or you will only see these things for a few minutes!


Here is the recipe:

In a small saucepan over medium heat, combine ¼ cup honey (serve this only to kids age 1 year and older) or agave nectar and 2 Tbsp firmly packed brown sugar. heat, stirring, until the mixture begins to boil and the brown sugar dissolves, 2 to 3 minutes. Remove from heat. Add ¼ cup creamy peanut butter (or any nut butter) and stir until smooth. Add 1¾ cups puffed rice cereal and stir until evenly coated.  Set the mixture aside until cool enough to handle (about 5 minutes).  Scoop up a rounded Tbsp of the mixture and use damp hands to form about twenty 1.5 inch balls, and place on a greased, rimmed baking sheet (or on wax paper).   Chill in the refrigerator until set, 5-10 minutes.  Store in an airtight container at room temperature for up to 3 days.

I say this only took 5 minutes to make because that is how long it took from the start of making it until one of the puffs made it to my mouth.   I couldn't resist eating one before it was set---I was hungry while I was making these.