Yesterday marked the end of my 20th week of pregnancy.   I can't believe I am halfway through it already.  I also thought this little girl was done giving me morning sickness, but Sunday was one of the worst days of morning sickness this entire pregnancy.  I had the full-blown all day nausea and vomiting.  But, there have been 3-4 really good days in between each bad day of morning sickness lately, so I really can't complain.  With Luke, morning sickness subsided around 12 weeks.  So, this pregnancy is definitely different!

So far, this little girl is not quite as active as Luke was, but she still makes her presence known with her kicks and spinning around in there.  I started feeling her inside around 15 weeks and on the outside around 18 weeks.  I knew Luke was going to be extremely energetic based on his constant movement in utero--I thought he was going to come out running at delivery.  So, I am hoping this means our little girl will balance Luke out well.  :-)  Luke has enough energy for the entire family!

I also think our little girl is going to weigh a little more than Luke did at birth.  Here are some belly bump pictures (from my pregnancy with Luke and with our little girl).  I started at the exact same weight and size on both pregnancies, so it is a pretty good comparison.  My weight is about the same as it was this time with Luke, but I feel like she is already up under my ribs.  Maybe it is just my imagination.


In order to prepare Luke for getting a little sister, I bought a little baby doll for him at Ross last week.   Luke has been very interested in babies since we told him there was one growing in my belly.  Everytime we go to the store, he wants to see the baby dolls.   Drew wasn't exactly excited when I told him I bought our son a baby doll, but I thought it would be good preparation, and something we could give our little girl later.  Luke has been so gentle and loving with the baby doll.   He rubs her head, gives her the pacifier, sings her songs and reads her books.  It is so precious!   Luke is really such a sweet-hearted little guy.  Here is a picture of him telling the baby doll all about some cars on a toy package: 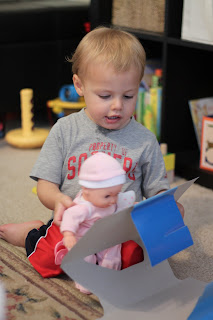