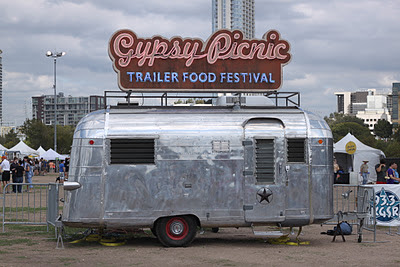 Last weekend, we took a break between tackling all of the chores on our to-do list and made our way to the Austin Gypsy Picnic (Food Truck Festival) to grab some lunch.  Drew and I consider ourselves "foodies", with some of our favorite television shows residing on the food network.  Also, one of our favorite past-times (at least pre-Luke) was to try new restaurants and dishes.  So, this was loads of fun for us!

Over 35 of Austin's finest food trailers were there to showcase their most popular offerings.  We loved that they offered "samples" (which I must say seemed more like a normal portion to me) for just a couple of dollars.  This allowed us to try several trucks and even split some dessert. 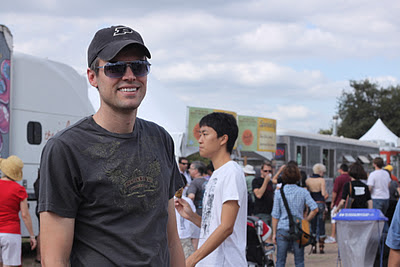 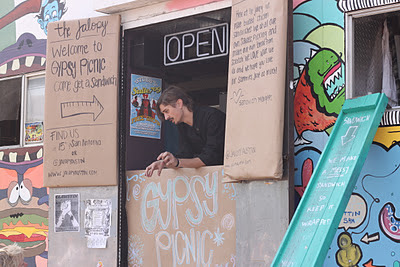 It Feels Great to Check Things Off the List--or is this nesting?

Today marks the completion of the 29th week of pregnancy and I am already a couple of weeks into my third trimester.  I cannot believe it.  One of the reasons I think this pregnancy has flown by is because we have been busy virtually EVERY weekend since we found out we were pregnant.   Last weekend was the first weekend we didn't have something going on and we were actually in town.  So, we made an aggressive to-do list that we have successfully tackled.  Maybe I am just nesting and want to get everything done and everything clean and organized, because it really feels so extremely exhilarating!


Some of the tasks checked off of our to-do list:
There were even more tasks that we were able to check off, but I won't bore you with those details.  It feels so good to write these completed tasks down!   Now that we have these other tasks behind us, I am really excited about moving Luke into his new room after decorating and organizing it and then also doing the same with our new nursery. 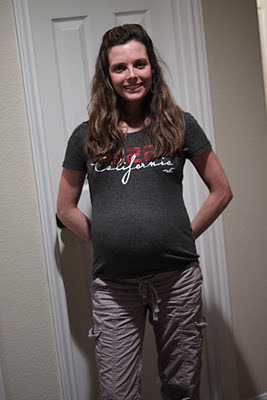 A Trip to the Pumpkin Patch with Family

Last weekend, we had a lot of family visitors and thought it would be a great time to visit our favorite pumpkin patch.  Unfortunately, Luke wasn't in a picture mood, but it was still a fun adventure outing with the family.  My mom and dad, my brother, Jason, and sister-in-law, Emily, and their children, Brody and Kaylee, and my sister, Holly, and brother-in-law, Ryan, and their children, Lilly and Linnea, visited for the weekend.

We went to Sweet Berry Farms in Marble Falls.  It is free to attend, and, of course, to take advantage of their wonderful props for fall.  But, you have to pay for some of the extras.  For example, while we were there we had to partake of their homemade pumpkin ice cream and strawberry lemonade, even though we brought a picnic lunch.  But considering we had many adventures while we were there, that was not a lot to spend.  And, the ice cream and lemonade was definitely worth it!  We petted goats, horses and donkeys and even a cute baby donkey that was just born that weekend.


Here is a slideshow of some of our adventures with the family at the pumpkin patch:
No comments:


Last Saturday, before the OU-Texas game (which was a very good one for our family--Boomer Sooner!), we decided to take a peek at our little girl inside the womb via 3D ultrasound.   I found a REALLY good deal at a place within a few miles from our home, and Drew's parents were in town for the weekend.  So, we thought it was perfect timing!

After breakfast, we headed over to the Ultrasound office and watched our little girl be a little camera shy.  Most of the time, she liked her hands up by her face.  I remember getting a 3D Ultrasound with Luke at 28.5 weeks, and he was also camera shy, with his hands by his face most of the time.  We were still able to get a few good pics though.

I know that we could just wait about 13 weeks or so and see her in person, but it is neat to get to know her this early.  Plus, we have really been struggling with her name, so it helped us to be able to put our name selections to a face.  :-)

Here is a picture of Luke in the womb, and then shortly after he was born: 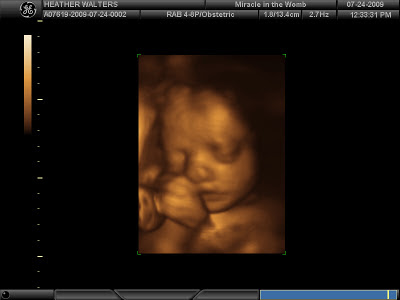 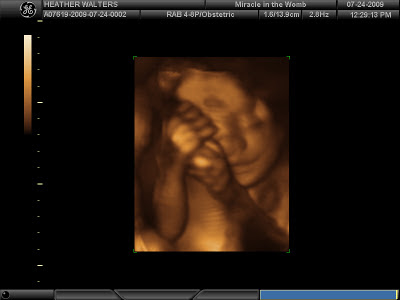 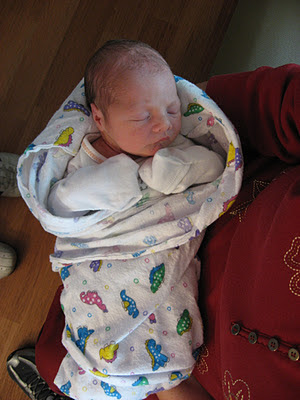 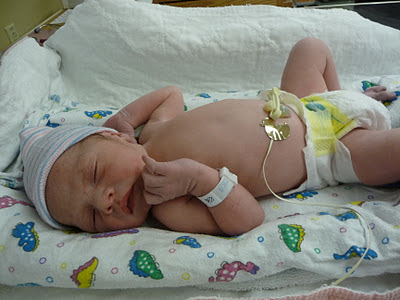 And here are a couple of the best pictures we have of our daughter so far:

Based on the ultrasound, we think she is going to look a lot like Luke.  It definitely looks like she has the same nose and lips as he does.  Getting this ultrasound just makes us even more excited to see her, and it definitely makes it seem so real.
No comments:

I have now come to the point in pregnancy where things are starting to normalize.  In fact, I am starting to feel much like I felt with Luke at this point in pregnancy.  The only differences now are that this little girl is not running marathon after marathon inside the womb as Luke did, and now I have a 27 pound boy that I am lifting on a regular basis (in and out of car seat, in and out of shopping cart, in and out of crib.)  My back, sciatic nerve and abs are starting to feel the consequences of this regular, awkward lifting.  Another difference in this pregnancy and the last is the fact that our life is a lot more busy now, which has been making this pregnancy FLY by!

Since I haven't been taking many "baby bump" pictures this time around, I figured it was about time to take one!  The last one was taken around 23 weeks.  Here is a 26 week progression picture: 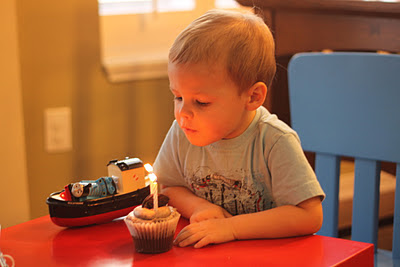 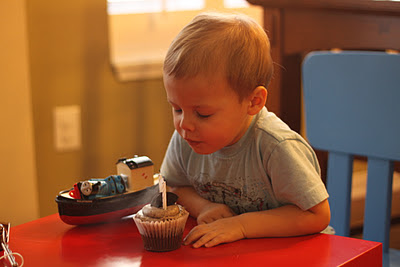 Yesterday, on 10/4/11 at 4:34am, Luke became a 2 year old!  We tried to make his day extra special.   We have been telling him for a few weeks that when he turns two, he will be a big boy.  We have also prepared him by telling him that shortly after turning two, he will not need his pacifier anymore (he only uses it during his afternoon nap anyway) and he will get to move into a big boy room and get a big boy bed.  We are planning on keeping the nursery as the nursery, and we want to give him a couple of months to get used to his new room before our baby girl arrives. We will start by eliminating the pacifier, and then in a couple of weeks we will also get his new room ready for his move.

We sang the "Happy Birthday" song to him several times yesterday, and each time after we finished singing it he would exclaim so proudly and loudly, "2!"  He is so happy to be two--after all, it is his favorite number.   Anytime we give him one of something, he always promptly asks for two.   For example, if he asks for a cracker and you only give him one, he very quickly asks, "two" while shaking his head no.  If we have allowed him to pick out a prize at a store, instead of one, he grabs one in each hand and says, "two?"

We bought him a special cupcake for his birthday yesterday and let him blow out his two candles on top.  Also, he got a new play kitchen (a great find on craigslist) and a couple of Thomas the Train toys from mommy and daddy.  He has been so proud of the kitchen, and says to us several times a day, "I cook!"

Unfortunately, we also had scheduled his doctor's appointment on his birthday yesterday.  So, he also received the gift of two shots yesterday.  His appointment went well and he is growing and developing very well.  He tried to cheat on the height measurement though--he stood on his tip-toes and refused to stand flat on his feet when we asked him to.  So, I had to hold his feet down flat.  The nurse and I laughed and she said she had never seen any other child try this! He tried to cheat one other time on a height measurement when we went to Silver Dollar City a few weeks ago and we were trying to determine if he could ride some of the bigger rides (you had to be 36 inches to ride them)--smart little boy!

At his appointment yesterday, he measured 33 inches tall, which is only in the 25th percentile.  He weighed 27 lbs, which is 50th percentile, and his head circumference is also in the 50th percentile. Luke's development is good as well.   He has started to speak in little sentences the last few weeks.  For example, he will say, "Mommy play cars" when he wants me to play cars with him.  It is so nice for him to be able to tell us what he wants.

Something that we started with his first birthday was that we made him a photo journal book that documented important events and milestones that occurred over the span of that year.  We created a book for him again for this year's birthday that began with his first birthday party on October 2010 and culminated with events from September 2011.  The book is actually written in language "to him".  Our plan is to create a book like this each year, and then give it to him when he leaves the house for college.  The last page of the book just listed some things about Luke that we wanted to remember from the year.   I am sure when he is 18 years old or so, we will not remember all of these details and feelings we wish to share with him that we feel are important now, so I am glad we are doing this for him.

I think the book (and even this blog) is similar in idea to what google shared in the "Dear Sophie" advertisement--this is the most precious ad I have ever seen--you have to watch it!  It brings tears to my eyes every time I watch it!

I must say, this blog has also really helped us document and remember important events and milestones.  It would have taken me many more hours to create the book if I didn't have this blog as a resource in looking back over the events of the year.

So, to finish this post, in keeping in line with our "journaling" goal (similar to the Google advertisement's message as well), here is another video we want to share with you someday, Luke.  We love you, Luke!  Happy Birthday little buddy!