Our Life at One Week Postpartum


We are starting to get the hang of this becoming a family of 4 thing.  Luke is adapting, we are starting routines, and Abbey is growing!  She was born weighing 7 lbs and 6 oz.  Today, naked but with a clean diaper on, she weighed 7 lbs 11 oz.  I am guessing the diaper weighs a couple of ounces, tops.  She is also very long!  She is in the 75th percentile for length at 21 inches.  Her head circumference is in the 50th percentile, and her weight is in the 25th percentile.  She is long and lean.  We are working on the lean part though with her constant feedings!  She still has such a sweet demeanor, and is a great self-soother.  The first week, we had to put a lot of effort into waking her up every two hours in order to try to get her to eat.  She was very jaundiced due to the trauma of her birth (bleeding/bruising under skull from the vacuum), so we needed her to eat very regularly so she could have frequent bowel movements to get rid of the bilirubin (which causes jaundice).  Newborns' livers are underdeveloped and unable to get rid of bilirubin quickly.  Jaundice causes newborns to be extremely sleepy and hard to wake, which makes getting her to eat frequently extra difficult.   It can be very serious if the bilirubin count continues to climb, even causing brain damage. Praise the Lord though--at her one week pediatrician visit, the doctor said she looked great!  In fact, he said he doesn't want to see her until she is six weeks old.  She was back up to her birth weight and her color looked great!  We are so thankful!  Now, she eats constantly and I think she must be going through that 7-10 day growth spurt.

One thing Drew and I noticed shortly after she was born (when we first saw Luke) was that Luke seems like a giant now!   Every part of his body-eyes, head, nose, mouth, legs, etc.- just seems huge.  We both swore that he must have gained 5 pounds and grew several inches taller since we got to the hospital.  I guess when you have a tiny newborn, your other child just seems larger.  One of the things we were very concerned about with the birth of Abbey was being apart from Luke for a little while.  Luke has been handling things well.  The first week he began acting out a bit.  We think he was just wanting some attention.  Luckily, he has had both grandparents to play with him pretty regularly for the first week.  I think this has helped him to feel special.   Since Mimi and Papa left early Wednesday afternoon, Drew and I have been spending some quality time with Luke.  Because Abbey's feedings and diaper changes are starting to become more routine, we are able to spend more time with Luke.  Luke is so fun to play with!  He loves pretending.  His favorite things to do are to cook you a meal at his kitchen, create wonderful towers, houses and roads, along with stories with his Lego blocks, or play with his cars.  Of course, he also loves to read just before naptime and bedtime.  We just love our little guy so much!

Daddy is enjoying his cuddle time with his daughter, as well as his fun playtime with Luke.  Luke and Drew have really bonded a lot over the past month since Drew has had so much time off for the Holidays and then with Abbey's birth.  In fact, I would say Luke is now becoming a Daddy's boy (he has always been a momma's boy).  Here is daddy getting a little cuddle time in with his daughter in between pretending playtime with Luke: 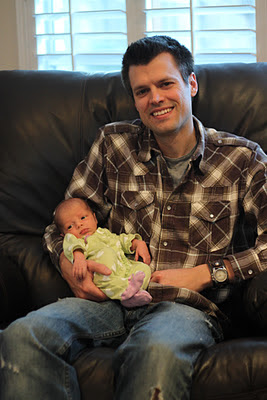 Lastly, since we took pretty regular pregnancy belly pictures, I thought it would be fun to do a side-by-side of Abbey in my belly (38 weeks pregnant) and Abbey outside (about 1.5 weeks after birth).  The postpartum photo was taken 18 days after the belly picture.
Pregnancy amazes me!  God is amazing!  It is still so surreal to me that this little being that I now hold in my arms was being developed inside of me for the past 9+ months.  Thank you, Lord, for your wonderful creation and the special healthy daughter you have given us that we now hold in our arms!