I know, funny title for a blog post.  But, I have just been thinking so much lately about how Abbey looks like Luke did when he was a baby.  Their personalities though--well, that is another story.  Their personalities are night and day, which is a good thing for this household.  Mr. Luke has enough energy for the entire house.

Don't they look so much alike?  In fact, when Abbey was born, one of the first things I said was, "Oh my goodness, that is Luke!"  Poor girl, she is already getting compared to her brother--even when she was minutes old.

Aside from looks, I am noticing at 3 weeks old, there are already some defining differences between Abbey and Luke.

She just laid there as she pooped with a look on her face of pure bliss.    After about 20 diapers worth of poop in one changing session, she was back to her old happy self.  And now I know how to keep Abbey happy--keep her digestive system going.  I tell this very long story to make a point--Abbey and Luke are also different in this way.  Abbey is a 1-3 poops per day child, whereas I believe Luke was trying to set the Guinness Book of World records for the number of diaper changes per day. I apologize if this illustration and story was a little graphic.  :-)

There are some similarities as well in their personalities.  I can already tell she is going to be a little sweetie pie, just like her brother: 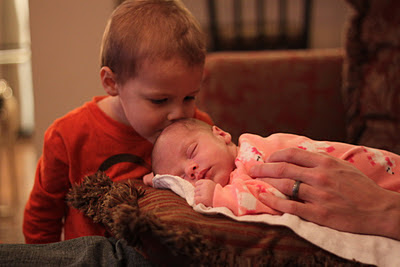 Our household is so crazy right now.  Because Drew is taking his last two days of paternity leave (today and yesterday), we decided to try to start potty training Luke yesterday.  We have had a little "Cars" potty for Luke for a long time now, and have casually talked about it and let him sit on it when he wants to.  I think he has been ready for a while--we just weren't ready to devote the time and patience required for potty training.  So, we thought we'd pick the best time--when we had a newborn!  I know, the time doesn't sound ideal, but we decided to do the crash-course version of potty training this long weekend.  We put Luke in some underwear and covered the big rug in our living room with a tarp (after a couple of accidents on it).  After one day of potty training, I am pleased to report that Luke can control his pee on the potty.  He can pretty much go at will.   The only problem is that he also pees elsewhere.   I know though that it is not a simple process, and we are trying to give him lots of praise and reward him for keeping his pants dry.

Here are some pictures from the past couple of weeks of Abbey: