Saving some money with potty-training, home-cooked meals and haircuts from barber Drew

This blog post will feature the recent happenings with each of the members of our family. 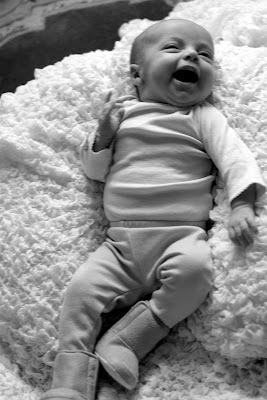 Abbey is now 5 weeks old and has gained three pounds in a month!  She is growing very quickly--much more quickly than Luke did.  It appears she is in the 75th percentile in both height and weight now.  A month ago she was only in the 25-40th percentile for weight.  She actually doesn't have a ton of 0-3 months clothes, but I am desperately dressing her up in some of them so that she has a chance to wear them before outgrowing them.  We weighed her at her bath time last night and she weighed in at 10 lbs, 10 ounces.  Considering the rate at which she is growing, we probably only have less than two more weeks in the 0-3 month outfits.

She has begun smiling while awake, and it melts my heart each time.  She has a precious, huge smile just like her brother!  She also has begun making some adorable sounds, which we love to hear.  We have begun to understand her needs a lot better, which means she spends less time crying.  I FINALLY found a pacifier that she will take, which is very handy.  I am no longer her constant pacifier.  :-)  However, she still does not take a bottle.

Abbey now spends a lot more time awake and even has "play time".  She enjoys us talking to her in "sing-song" voices and enjoys batting at objects in her infant-to-toddler rocker.  Her favorite household objects to stare at for long periods of time are ceiling fans and our window blinds.  Here are some recent photos of Abbey. 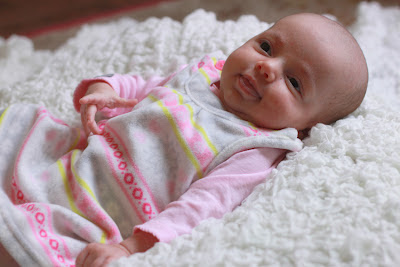 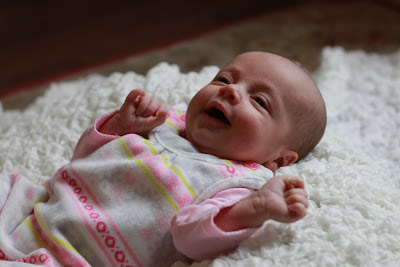 Luke has been a very busy boy lately.  Besides potty training (which he is doing very well at), he just started at his new school a couple of weeks ago.  He has adjusted very well and both he AND I look forward to it every Tuesday and Thursday.  He really likes his teachers and has made friends with some of his classmates.  Also, I get SO much done during his time at school.  Drew and I even plan on having a Valentine's date with each other at lunch this Tuesday.  Of course, Abbey will also be tagging along, but she will probably sleep through our lunch date.

This past weekend, we decided to cut Luke's hair at home instead of paying someone else to do it.  We have taken him to professionals a few times and have taken mental notes each time as we watched them perform the haircuts.  We made notes of what we liked and what we didn't like, and we made notes of the methods the professionals used.  Now, it was time to save some money and do it ourselves.  Drew is the haircutting professional at our house, since he has cut his own hair for many years.  So, we set up to cut Luke's hair in our living room.  We turned on the TV and put on the movie, "Toy Story" to keep his attention focused there.


Drew did an excellent job on Luke's first home haircut.  I don't see any barber shop visits for us in the near future.

As far as potty-training is concerned, Luke has very few accidents and has even been asking to go on the "big potty" instead of his little potty lately.  He even has gone to the potty in public restrooms, which really surprised me.  I figured he may have some fear towards the public potty, but he did not.  He is currently going both #1 and #2 in the potty very successfully.  Let's hope we can continue this success because we are really enjoying not having to do diaper changes for him.  He hasn't been in diapers for two weeks now (except for at nap time and night-night time), so this is also helping us save some money.

Drew and I are obviously very busy keeping up with these two kiddos.  After two weeks of chasing around a two year old while caring for a newborn, I can vouch for this baby product being a must-have for any other parent in my situation: 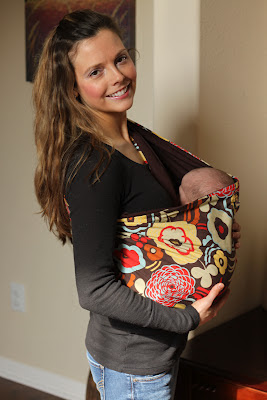 We actually have this sling, pictured above, and a bjorn carrier.  The sling is nice while she is little, because Abbey loves to be held in the cradle position.  She can stay in this thing for hours and be perfectly content.  So, she pretty much stays in the sling for most of the day while I play with, take care of and chase Luke around.  She will enjoy the bjorn carrier more later when she can hold her head up and she can face forward.

We love eating home-cooked meals, but have found that eating home-cooked meals regularly now requires much planning ahead.  So, I decided to try Rachael Ray's "One Month of Make-Ahead Meals" which she featured in the September 2011 issue of her magazine.  Basically, you spend one day in the kitchen on a weekend cooking meats, veggies, rice and sauce and you will score the building blocks for almost a month's worth of easy dinner recipes.  We tried this last weekend and were extremely pleased.  It was super easy fixing dinner for the family every night, with each meal averaging about 20 minutes to create.  You just defrost whatever building blocks you need for that evening's recipe and add a few other ingredients to create a delicious masterpiece. Plus, we had leftovers for lunch the following day.  Click here for a link to the genius plan that we followed for this month.   The pork and roasted veggies are AMAZING!  We ate pork tacos one night that were the best tacos I have ever eaten!  (I think it had something to do with the honey-lime dressing piece of the recipe, which I will start using on my salads!)  Over dinner tonight, Drew and I were just discussing the meals we had this past week.  We both agree that each of the meals was extremely unique and extremely tasty.  It is exciting to have new, delicious meals for each night of the week.  Not only did we enjoy the taste of the meals, but we are also enjoying what they are doing for our pocketbooks.  :-)

Email ThisBlogThis!Share to TwitterShare to FacebookShare to Pinterest
Labels: recipes