Things I want to remember from the past week. (Volume 1.2) 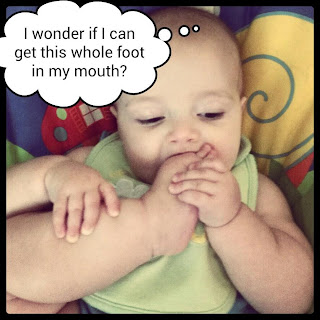 1.  Okay, so this first story isn't from the past week, but I DEFINITELY want to remember it.  So, I am documenting it here.  About a month ago, I was having a difficult morning.  I was trying to get myself, Luke and Abbey ready quickly, feeding Luke and feeding Abbey, changing clothes, packing Luke's school bag and putting his lunch together for school before we had to leave at 9am.  On Tuesdays and Thursdays, Luke attends school.  So, sometimes the mornings feel like a lot of work to get out the door.  But, I have it down to a strict routine and it usually isn't that difficult.  For some reason that day, the feeling of being constantly needed was just harder than most.  I knew that when we got into the car, Luke would want to listen to "his" music (or as he says, "His Mukics") and I really was just hoping to have a little bit of something for myself.  Not to have to listen to the little kids on the CD sing "Mary Had a Little Lamb" just this one morning was something I really desired.  I wanted to hear some grown up music.  I actually decided to put this into a conversation to God after I got into the car and began driving.  The prayer went something like this: "Dear Lord...I don't know why, but for some reason this day is just really hard for me.  I would LOVE to be able to just hear some grown-ups singing some praise and worship music on the way to Luke's school."  The next part of the story STILL gives me chills when I tell it.  Instantly after this prayer, Luke says something I have NEVER heard him ask before: "Mommy, I want to listen to some of your music.  I like your music."   Praise the Lord.  This is literally the most instant answer to prayer I have ever experienced.  It serves as proof that God hears ALL of our prayers.  Even simple little requests like this one.  He knows us and truly cares about us--every little piece of us.


2.  Drew and I went on a date.  Really, this should not need to be on a post with the title, "Things I want to remember from the past week", because they should be occurring often enough to where they don't get documented like a special, one-time event.  But, we actually haven't had a date in about a year, so it is worth documenting.  Drew's parents came up for a visit and kindly offered to stay home with the kiddos while we headed out for a date.  Abbey is exclusively breast-fed and does not take a bottle (believe me, we tried the bottle and she refuses).  So, it has been difficult in the past to be away from her for more than an hour or two, because whoever she was left with was not able to feed her.  But, since she turned six months old, we have been adding solids to her diet.  I am able to be away from her from about 4:30-6p, because she can be fed solids during that time if she becomes hungry.  Then, I nurse her for the last feeding around 6:30pm before she goes to bed at 7pm.   She doesn't wake up for 12 hours for her next feeding, so after 7pm is the best for dates.   Drew and I ate dinner out at 5pm and then came back home to put Abbey down for bed.  Then, we headed back out for part two of our date:  shopping at the Outlet Mall and dessert.   It was so much fun just to be able to look at each other, hold hands and not be needed by others for a couple of hours.  Every time we have a date, it feels like the "romance" in our relationship is rekindled.  We MUST have more dates.   I told Drew at dinner that I "missed" him.  It made me teary in a happy way.  I love him SO MUCH!

3.  Abbey's new favorite sounds are "Da" "Ba" and "Ga".  Here is a video of our happy little girl practicing her "Ga" sounds:


4.  I love our kids SO MUCH.  And, I can't believe that my love for these kids just keeps growing--the love is so abundant that it is overflowing.  I bet I give them each about 20 hugs and kisses a day.  Is that weird?  I don't even know what is normal.  I have a feeling these kids are going to grow to up be "huggers".

Luke uses words to describe everything that he is thinking and feeling now and it is just SO precious. He doesn't stop talking. I love this age--the age when they can express themselves so well with words.  It gives you a glimpse into their precious, unworldly, young minds.  It makes me not want to have to expose him to the hate, worldliness, and other evils that exist around us, but I know it is going to happen someday.

Well, I came a little closer to exposing him on Wednesday--a day that was clearly a "Mommy Fail" day.  Mimi and I were going to take Luke and Abbey to a theater to enjoy their first "movie in a theater" experience.   We were going to see Winnie the Pooh, which was advertised as a $1 movie and geared towards young children.  We arrived to the theater 20 minutes early (Mommy Success), but found out that the movie was actually playing about a half hour away in a theater with the EXACT same name on the same Highway down South (Mommy Fail).  Quickly, I realized there was another theater that I had seen listed as showing the same movie just a few miles away (also for a $1--Mommy Success).   We arrived only to find out we could not get in unless we were part of the school group who rented out the theater for the movie (Mommy Fail).  By this time, Luke was extremely disappointed, as I had been hyping up this movie for the 24 hour period preceding this time (Mommy Fail).  Mimi and I swiftly decided that we were going to see a movie, $1 or not, so that he could have his first theater experience that day.  We bought tickets at another local theater for Ice Age 3.  Mommy Fail #4 occurred as the previews began and were SUPER loud.  Then Mommy Fails #5-10 rapid-fired.  Luke kept exclaiming..."It's too Loud" and had very confused looks on his face as inappropriate-for-his-age previews came on.  I was trying to think during the previews about how I am going to later have to explain death to Luke (after a Tim Burton preview) and need to explain other things that occurred.  When the movie began and the little teen mammoth started talking about the "hot" boy mammoth, I knew this was definitely not for Luke.  Luke wanted to go home.  Mimi had her hands over Luke's ears due to the piercing volume and we soon decided to go ahead and leave.

It has been several days since the experience and Luke continues to tell everyone (including me) each day, "I went to the movie...I didn't see Winnie the Pooh" and "It was too loud".  I am just thankful these two things are the only things he remembered from the experience.   On a positive note, Luke and Abbey really surprised me during this experience.  They both were super-easy going in the theater.  Luke sat very still and was quiet during what little bit of the movie and the previews we saw.  We were probably there for about 45 minutes total.  Abbey also was such a good little baby.  We will definitely be able to do this again and I am actually really looking forward to it.  I know Luke will really enjoy it.