Things I want to remember from the past week. (Volume 1.5)

This past week I actually captured a lot of videos of experiences I want to remember. I have been much better about grabbing my smart phone as quickly as possible to capture precious moments on video.

1.  We attended a free, introductory, music together class last week.  We had so much fun together during the class as a family.  I think Luke really got a kick out of seeing daddy participate. We learned many fun songs that had movements to go along with them.   The kids also were able to use some musical instruments they had never used before.  Here is a short video of the kids enjoying a drum before class began:


2.  Speaking of music....I JUST ADORE Luke's precious singing voice.   The kid can really carry a tune also.  When Abbey is upset, he sings a lullaby which just calms her down almost instantaneously.  Luke has a repertoire of about 25+ songs that he enjoys singing.  Lately, he has been singing Rock-a-Bye Baby.  His voice is beautiful and in tune when he sings it acapella.  We have a CD that includes a lady with a soprano voice singing the song.  Although her voice is very high, Luke tries to stay on key with her.  He struggles a little bit with getting his voice that high, but it is just precious.  He never performs if I get the camera out.  So, I tried to sneak a video of him singing Abbey to sleep in the car after church on Sunday:


3. With the heat being so intense this summer, we haven't taken as many family walks.  But, we have increased the frequency recently, as the nights are becoming more bearable.  Here is a video of Abbey swinging.  Unfortunately, I think it is only the second time she has been in a swing.  I love how she kicks her legs--almost as if to make it go higher.


4. Abbey tried applesauce for the first time a couple of days ago. I assumed she would LOVE it. I mean...what's not to love? But, after watching this video, what do you think?

In case you still aren't sure, here are some still shots I captured on my phone from the video:


No, I don't think she likes it.  At least not this time...maybe next. 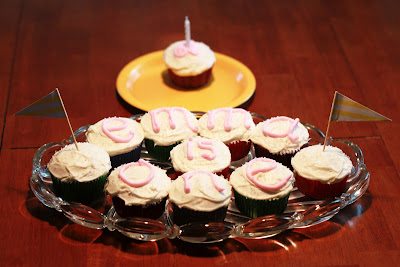 5.  Lastly, we attended a friend's first birthday party last weekend.  Emma is such a sweetheart.  She became so shy when the group sang "Happy Birthday" to her and actually ducked her head behind the table.  She didn't want to try her cake.   I'm sure all of us looking at her, smiling and laughing, was a little intimidating.


We all had so much fun in fellowship at the party.  The attendees at the party were all part of our church small group.  The party was a great reminder of the importance of these friendships.  Drew and I are both transplants to the area, and therefore, really have no nearby family as a support network.  We are so thankful for our friends here and are looking forward to these relationships continuing to grow deeper.