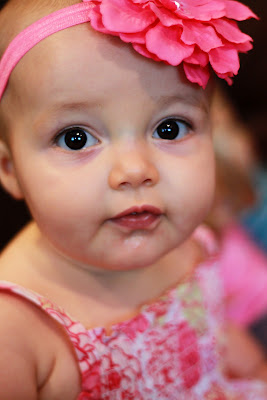 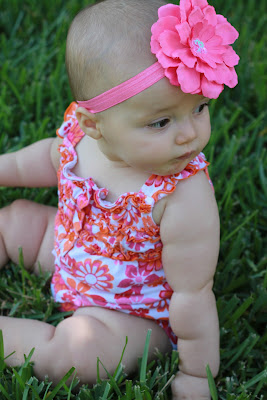 Abbey is such a sweetie pie!  Also, I think she is one of the most content babies in the world!  She loves to sit in one spot, or get on her belly, and just watch whatever is going on in her surroundings or plays with whatever toys are around her.  Of course, it probably helps that we bring her anything she needs.  She has no desire right now to be mobile, and I am perfectly alright with that.  She really balances out our household and God knew exactly what we needed.  Her brother, on the other hand, was extremely mobile at her age.  He actually was cruising around furniture even before he crawled (Luke didn't crawl until around 9 months of age).  He was very energetic even in the womb, and.....he is still is very mobile.  Abbey just giggles at him.  She thinks he is so silly! 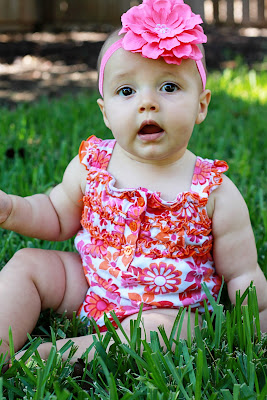 Abbey is a talker!  She currently says "dada", "mama", and "bubba", along with a bunch of gibberish.  And although she is very content, when you leave the room, she also likes to let you know very loudly that she is not happy with that.  She does not like her peeps to leave her!  Just because she is content does not mean that she is not loud.  When we are out and about and she remembers just how happy she is, she lets out these VERY LOUD happy screams.  We get many looks with body language that delivers the message, "please control your child who is hurting my ears".  Of course, I am sure those are people who have never had a child and do not understand that it is difficult for a baby to understand when it is alright to let out his or her loud happy sounds.  Nonetheless, we are trying to teach her these things.


Abbey is getting tall.  Perhaps I measured incorrectly (I measured 3 times, but still, it is possible), but today she measured 29 1/2 inches.  Her infant carrier car seat only fits babies up to 28 1/2 inches tall--oops.  I don't know how she grew so quickly!  So, she has now transitioned to the massive, convertable car seat in our car.  This makes me sad for so many reasons.  First, my baby girl is growing up too quickly--she still is super-cuddly though!  Second, our front passenger seat had to be slid all the way forward, which makes it difficult for someone else to ride along with the driver and the two kids.  And last and most important, her car seat can no longer be clicked into the stroller base when we are out and about and she is still sleeping.  Bummer!  Oh well, I will just need to make sure I am home for her morning naptime from now on I guess.

Abbey is a great sleeper just like her brother.  She still does a great 45 minute to one-hour morning nap, a two-hour afternoon nap and sleeps 12 plus hours at night.  We usually put her to bed around 7pm, she wakes up to eat around 5:45am and then goes back to sleep until around 8am.

She is still such a good eater.  Also, she now will drink milk out of a sippy cup.  This is a HUGE milestone.  She never drank milk out of a bottle.  We tried daily for many many months and then finally just gave up on it.  Then, we noticed around 5-6 months of age or so she was obsessed with trying to grab Luke's cup and hold it.  So, we bought her a sippy cup around that time.  At first, she just loved holding it and biting on the spout.  But, over the past month and a half or so, sippy cup time has become one of her favorite parts of mealtime.

Abbey's favorite toys happen to all be Luke's toys.  Right now, Luke thinks this is cute.  But, I am sure he will soon realize it is not as fun as he thought it might be.  If Luke is playing with the Lego duplo blocks and Abbey is sitting next to him with some of her toys, of course, she grabs some of his blocks and begins playing.  If he is playing cars, she wants his cars.  I guess she is already looking up to big brother and is excited to be able to do what he does.