On Becoming A Germaphobe...

I think I am officially a germaphobe now--in other words, I now have a strong fear of contamination and germs.  But, I think that the fear is fairly reasonable when you are undergoing chemotherapy treatment.  The fear really set in when I saw my one-week post chemo lab results: 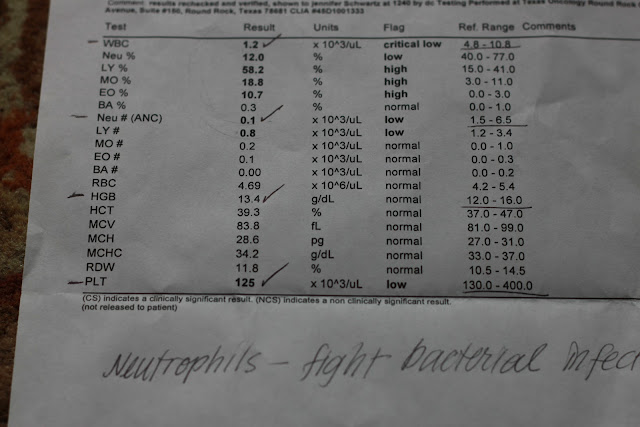 Ok, so maybe I am not a pathological germaphobe, but I am EXTREMELY aware of all possibilities of germs around me since I saw my lab results.  The tests that are check-marked on the paper above are the labs to which the doctor pays the most attention.  They need my white blood cell count to be at least 4.8 (it was 1.2--critically low) and my absolute neutrophil count (ANC or Neu#) to be at least 1.5 (it was .1).  Neutrophils are the white blood cells that help to fight bacterial infections.  When the Nurse Practitioner showed me the lab results, I was shocked at how low they were.  However, she said they expect my counts to be low a week following chemotherapy.  She said that the Neulasta shot should kick in soon after that day to begin building back up my white blood cell count.  Neulasta helps encourage bone marrow to build more white blood cells.  That is why Neulasta causes a lot of severe bone pain.  I told the Nurse practitioner on that day (Day 8 of Chemo Round 1) that I hadn't yet experienced "too difficult to handle" bone pain.  I had the worst headache of my life the day following the neulasta injection, but that was all I had experienced up to that point.  Another patient that I had spoke with that day in the office said her pain from Neulasta was unbearable.  She actually had to take hydrocodone for the pain and that just "took the edge off".  I was thankful that I didn't have that type of pain, but I commented to her that I wish I had some pain so I knew it was working.  I actually even prayed that night that the Neulasta shot would begin working in me so I had a fighting chance against bacteria infections and viruses.  Well, Day 9 brought for me the WORST pain I have experienced in my life.  It was worse than childbirth labor pains.  The pain was primarily located in my hips and pelvis.  Bone pain is completely different than muscle pain, because muscle pain can be relieved naturally with cold or heat, or even massage.  I found that nothing really relieved the bone pain.  And, when I walked around that day, I walked like an elderly woman.  But, I got what I prayed for--an obvious sign the Neulasta shot was kicking in.  Hopefully my CBC will look fabulous on 10/18 (this coming Thursday) so that I can begin my second round of chemo that day.

After my visit to the doctor last Thursday, they told me I could stop the Levaquin antibiotic after taking just two days due to some scary reactions I was having to it.  Then over last weekend, I developed bronchitis again, so the on-call physician prescribed me a Z-pac antibiotic.  Now, I feel the infection is gone and I just need to rid my body of the congestion that is hanging around.   I could tell that my white blood count was extremely low during the second week of chemo.  I had zero energy.  If I stood up for 15 minutes, I felt like I was going to collapse.  (Ok--enough about how I have been doing with the lingering illnesses and back to my discussion on becoming a germaphobe.)

When your immune system is at such a low level that ANY exposure to a virus or bacteria can make you REALLY sick, I think becoming a germophobe is somewhat inevitable.  I notice EVERY potential opportunity to acquire germs now.  For example, a trip to the local grocery store, HEB, opens up hundreds of opportunities to come into contact with germs.  From touching the cart (which we wipe down with antibacterial wipes) to selecting produce and weighing it, to selecting groceries, and especially signing with the credit card pen, one is exposed to countless opportunities to become ill.  I never really thought about grabbing that credit card pen and signing before chemo.  Now, honestly, I even avoid the grocery store--it is probably one of the worst places for me to go when my immune system is down.  When I am out and about, I spot every bottle of hand sanitizer that is provided for customer use.  I really wish there was hand sanitizer available next to every credit card machine.


My hands and Drew's hands are becoming so dry from constantly washing and sanitizing them.  Poor Drew is probably so tired of me questioning him about washing his hands.  I think even he is surprised sometimes how OCD over germs I have become, but I am so focused on staying healthy. For example, we were looking in our refrigerator a couple of days ago checking out some ham we were considering putting on a homemade pizza.  Drew began touching the ham, trying to determine if it was still good (we had just bought it but it looked a little funny).  I immediately stopped him and asked him if he washed his hands before touching it.  He replied, "Yes, just a few minutes ago."  Then, I began telling him all of the activities I saw him do in the last few minutes since washing his hands. ( Only a germaphobe would be watching others like a hawk to determine whether they were remaining germ-free.)  I felt these activities exposed him to germs and then he touched the meat.  We eventually decided to discard the meat.  Before chemo, the thought wouldn't have even came into my head about questioning him like I did then.  Actually, previously the things he had done since washing his hands I wouldn't even consider as potentially making one sick.  But, when your immune system is super-low and your body is like a wide-open door inviting in viruses and bacteria, you think of EVERY possible line of exposure.  Drew really does a great job of thinking of all of the potential ways of germ exposure and he also is great about questioning me about washing my hands after touching certain things.  We are helping each other here, but I am extremely sensitive at recognizing potential exposure to germs.  Our biggest exposure to viruses and bacteria now is probably Luke's school.  We are just praying that no parents send their children to school ill and expose Luke.  We are also hoping that Luke is washing his hands regularly while there.  When Drew picks Luke up from his school on Tuesdays and Thursdays, he takes him to the restroom and washes him down even before loading him into the car.  Then, when Luke gets home, Drew changes his clothes and immediately puts Luke's school clothes in the washer.  Hey, maybe we should just buy some Hazmat suits for when we go out in public!  :-)

God is SO good!  He has answered so many prayers, both big and small.  So, here are our current prayer requests related to all of these germs.  We are entering flu season, so this is probably one of the worst times to be undergoing 6 months of chemotherapy.  We appreciate your prayers more than words can show!

1.  Please pray my immune system will function at its best during treatment.  In fact, I am praying for a SUPER-immune system--one that is so well-functioning that it even rids the body completely of this cancer!  We bought a juicer and are trying to either juice fruits and vegetables or make a fruit and veggie smoothie in our blender daily.  I want my body to function optimally.  I am hoping my immune system will be up this weekend so we can make a trip to Whole Foods to buy some super-foods to eat regularly.

2.  Please pray that our entire family will remain well so that I do not get sick.  If Drew, Luke or Abbey get sick, it is going to be tough for me not to also get sick.

3.  Of course, last and certainly not least (as always), we ask for prayers of complete healing.  I am beating this cancer, thanks to your prayers!