I despise wasting things.  I think it comes from my innate (sometimes extreme) thriftiness.  You can read more about that in previous blog posts like this one: here.  I will often reuse things as many times as possible before I get rid of them.  I had such difficultly justifying the purchase of maternity clothing during my pregnancies, because it is something that is used for only a short period of time.  For this reason, I mainly wore my non-maternity clothing during both of my entire pregnancies.  Yes, my shirts stretched out quite a bit (as evidenced by the photo below), but they bounced right back to normal size after a wash or two and I saved some money.


For someone who wants to wear their "normal" clothes during pregnancy, my recommendation is to buy some long, stretchy tank tops (which you can use after pregnancy as well) and a bella band.   When your non-maternity shirts begin to ride up due to the expanding belly, your stretchy, long tank top will save the day by covering your belly.  The white piece of fabric pictured below is a bella band.

The bella band is awesome.  When your higher waist pants can no longer snap or button, simply leave the pants unbuttoned, put a bella band over them and no one has to know.  :-)  It looks like you are wearing a long tank top or camisole underneath whatever shirt you are wearing.  Although the bella band is fabulous, it is not something I thought I would get much use of following my pregnancy.

A few weeks ago, I pulled one of my bella bands out to give to a friend who is pregnant.  It was sitting on the counter for a while, because she accidentally left it at our house on the day I gave it to her.  As I was putting it away until the next time I saw her, I had an idea.  I could make use of it during this post-surgical phase.  The idea came after an embarassing, but probably funny, personal experience.  I have been wearing button-up shirts because, frankly, they are the easiest to get on and off since surgery.  Even more so than the ease of getting button-ups on, non-button ups are VERY difficult to get on and off.  One morning, I decided to put on a button-up shirt that is pretty short.  It ties at the bottom so it really requires a tank-top layer underneath, unless you want everyone to see your midriff.  So, I decided to put a tank top on underneath.  Duh! The whole reason I had selected a button-up was due to its ease of putting on and off.  Now, I was going to put on a tight tank top layer underneath?  What was I thinking?  Needless to say, it didn't go so well.  After getting stuck and spending several minutes trying to either pull the tank top all the way down and on or remove it (picture my head through the top and my arms stuck in the arm-holes and sticking up alongside my face), I came out of the bedroom and asked for Drew's assistance.  Of course, he asked with an understandably slightly stern tone and a bit of a laugh, "WHAT are you doing?"  He helped me out of the tank top and I selected a different button-up shirt.  However, a few days later I saw the bella band and had an idea.  This is the result: 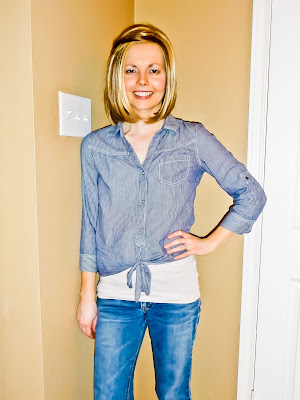 So, that is the story of how I was able to re-use or recycle a piece of maternity clothing.