Dropping my flute during the chair test in front of the entire band, mentioned a few posts ago, was one of them.  Or, I could share the story about the time one of my best friends and I wore the exact same dress to a National Honor's society induction ceremony.   I wasn't concerned about it until I realized that alphabetically our names came after each other.  This meant that we would be going on stage one, after the other, in our identical dresses.  Because she was one of my best friends, I am sure people thought we planned that.  "Oh, wouldn't it be cool if we got the EXACT same flowery dress for the honor's society awards ceremony!"  Not!  Actually though, I didn't find it that embarrassing.  I really wasn't that concerned about popularity and I don't think my friend was too embarrassed either.  So, I wouldn't say that was my most embarrassing moment.

There was also the time when I had to go in front of the entire English class in seventh grade and stand on a bench as the guest speaker used me as a prop.  Junior high was a very awkward time for me.  I was about 2 feet shorter than everyone else (or so it felt).  I had a terrible hairstyle (bad perm and bangs which I just wasn't sure how to style).  Anyway, I believe I was supposed to be Juliet that day (from Romeo and Juliet) and the speaker was pretending to be Romeo.  I hated being the center of attention, so this was pretty embarrassing for me.  I was so relieved when that class was over.  But then, at the end of the school year when the yearbook was released, there were several embarrassing photos of me from that day, with silly little captions.  It was obviously a bad hair day and an embarrassing situation and now the moments were captured in photos, which subsequently were printed in yearbooks. 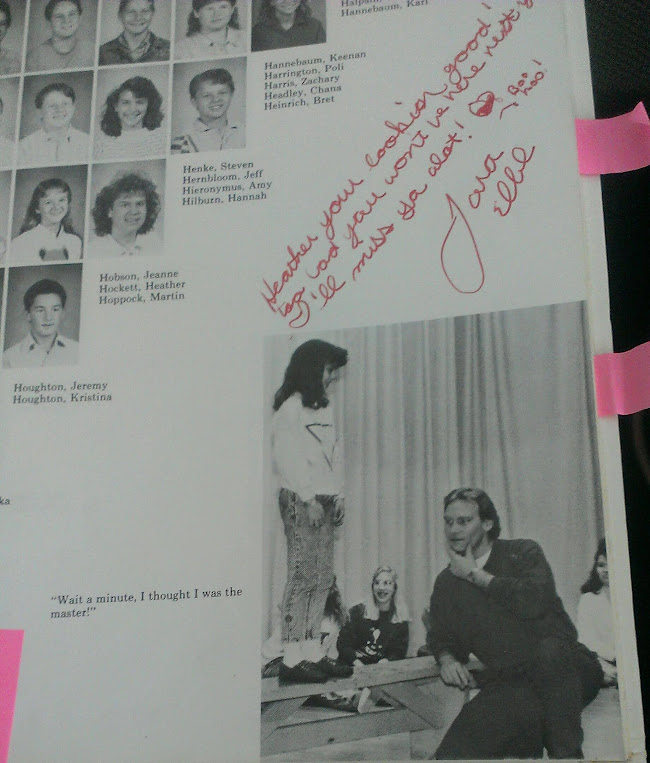 Then there was the time prior to Lasik eye surgery that I was on a family vacation (with immediate and extended family) and we decided to go swimming in the hotel pool one evening.  I was literally nearly blind prior to my eye surgery.  There were about 12 family members who decided to swim that evening in the large pool.  When we first arrived, prior to taking my glasses off, I had examined the pool and saw that we were the only ones there.  Thank goodness--there were a lot of us.  I didn't wear my contacts, because I didn't want to risk losing one while on vacation.  Plus, I enjoyed swimming under water with my eyes open.  We played games in the water and such.  I decided to sneak up behind one of my family members and then jump onto his back to scare him.  Unfortunately, it was not a member of my family.  It was a complete stranger who now had a strange teenager on his back.  That was pretty embarrassing.  But, it still was not my most embarrassing moment.

I will admit though that my most embarrassing moments are related to seeing something different than what is actually there.  One of my most embarrassing moments happened while I was pregnant with Luke.  Drew, his parents and I had gone out to eat at one of our favorite restaurants.  I have to preface the rest of the story by mentioning that I am a fairly outgoing person.  I also am a pretty energetic and an easily excited person.  As we were leaving the restaurant, I thought I recognized an older couple--one of our friends' parents.  Drew and I had only met this friend's parents once, but for some reason I thought I knew them.  I had some major pregnancy brain going on and I had forgotten their first names.  But, for some odd reason I still decided to exclaim in a loud and excited tone, "Oh hi!  How are you?"  They looked at me funny and replied in a questioning tone, "good?" I continued to get closer to them, really examining them to make sure they really were who I thought they were.  I said aloud, "Oh wait...", realizing I may have made a mistake.  Even though they gave me the funny looks that yelled, "I am not sure who you think we are crazy lady," I proceeded to say, "Wait..it IS you!" I had to say, "you" because I didn't even remember the names of the folks that I thought these nice people were.  Oh my goodness.  By this point, Drew, rightfully embarrassed, was already outside and practically in the car (probably wanting to drive far, far away).   Then, they gave me some looks that CLEARLY said, "we don't know you lady."  I said, "oops--nevermind.  I thought you were the parents of a friend of ours.  You BOTH look like them but obviously are not.  Sorry." That was pretty embarrassing. But what made it even more embarrassing was the fact that there was a LARGE crowd who witnessed all this.  The large crowd that was waiting to be seated at the popular diner, as well as those folks who were already seated at nearby tables in the restaurant.  Although I have tried to learn lessons from these embarrassing moments, I am sure there will be more of these types of moments to come!