Dress up Days Are Here

I have been so busy lately, that I somehow thought I already wrote this post.  The to-do list in my head is just so lengthy that I guess I got really excited about crossing stuff off of it and this got inadvertently crossed off.  Granted, I did post some of the photos on Facebook, so that is probably part of the reason I forgot.  But, a few Facebook photos don't tell the whole story.  I want to remember some of this and I want Abbey to be able to read this someday.  So, here we go.

A couple of weeks ago, Abbey was sitting on our large leather recliner in the living room.  She lay back, relaxed and then asked me to go get her drink.  I asked her, "Are you Queen Abbey"?   She replied, "no, I am just Abbey."  Then, I asked, "Oh, are you princess Abbey?"  She again replied that she was "just Abbey".  About 30 minutes later, she gasped loudly exclaimed, "I need my blue crown!"  She said it suddenly, out of the blue, like it was some big epiphany!  I guess she was still thinking about my queen and princess comments and she thought that although she wasn't an actual queen or princess, she could pretend to be one.

I had purchased a few fun dress-up costumes at a garage sale a little over a year ago that I hoped she might enjoy some day.   Most were hung up in the back of her closet.  A couple of little princess crowns were included in that group of costumes.  Luke was eager to help her find the crown.  He was the first up the stairs and we soon found a crown.  But, Abbey said,"No, not that one, the Blue one."  Oh, I didn't even know she knew she had a blue crown.   But, apparently, she knew all about it.  We found it and placed it on her head.  Then, she needed a beautiful gown to go with it.  We all were having a fun time dressing Abbey up. We were having so much fun, that I failed to get a photo of her first beautiful dress up costume.  She first donned a white ball gown to go with her blue crown.  But suddenly, she noticed the little princess ballerina leotard in her closet, and needed that one on immediately.  The outfit wasn't complete though without the little white pretend heels.

So, we did a quick costume switch, and that leotard was what she wore the rest of the afternoon.  I captured some photos of her in that costume.  The girl moves VERY quickly, so I didn't capture too many. 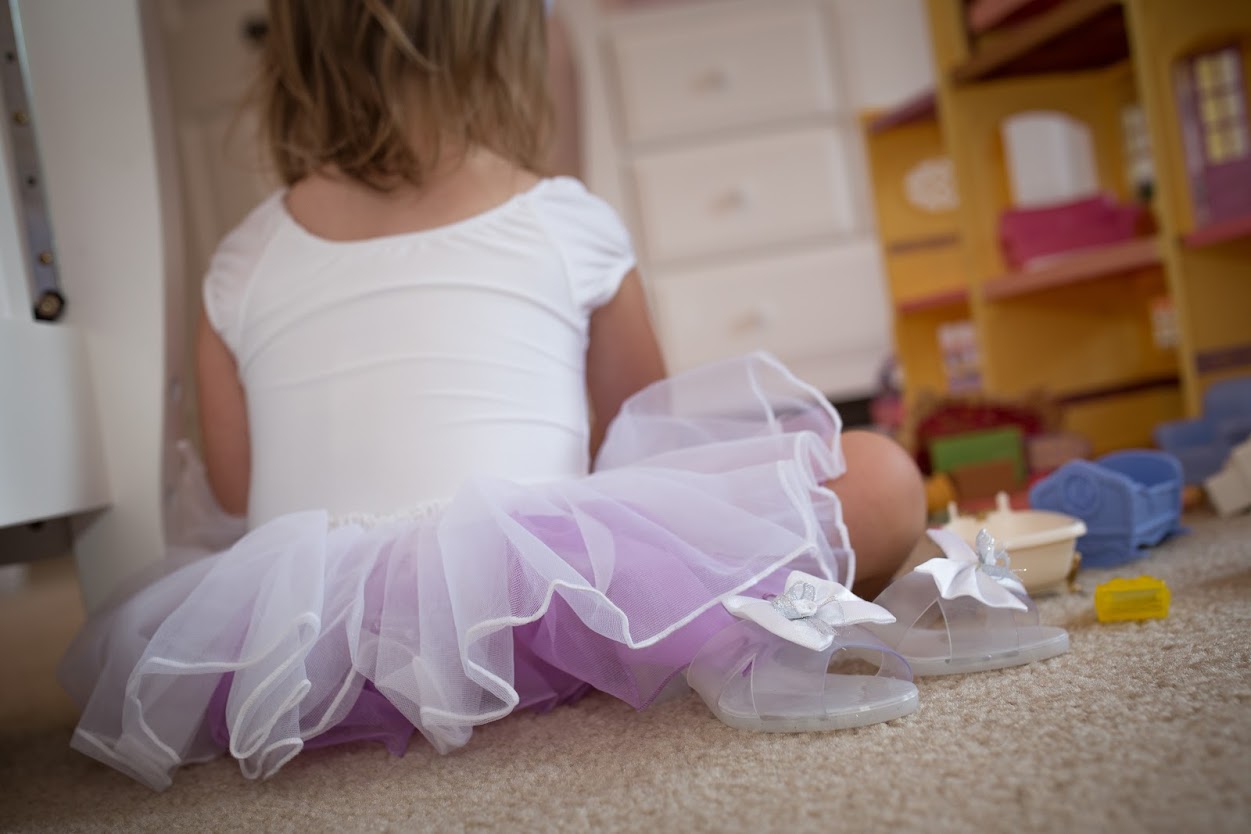 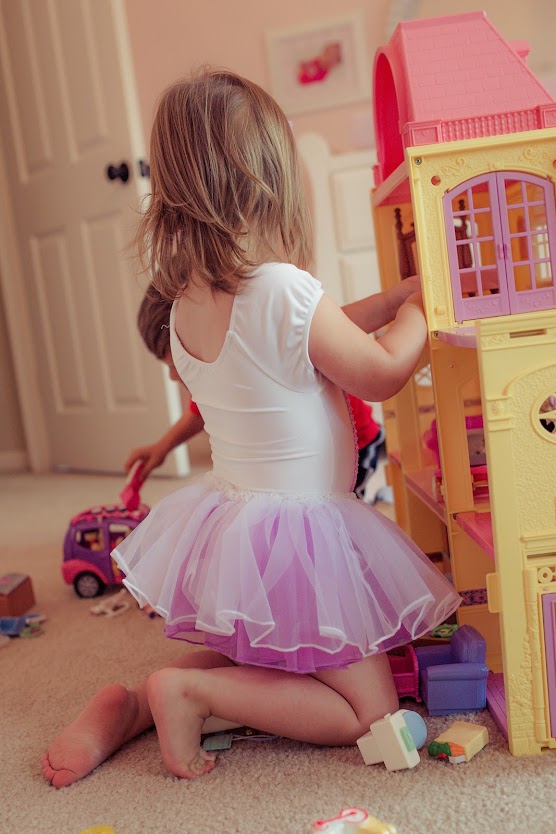 Now, this post really isn't anything special to most people. But, it is still something I want to remember.  I have been told to cherish these precious moments.  Someday, our little Abbey girl will be donning a wedding dress, instead of a pretend costume.  For now, she is enjoying being a little girl and doing "little girl things."  What's funny is that I figured that little girls who enjoyed dressing up were in some ways guided by their mothers to find the love for that.  But, I guess that just isn't always the case.  Abbey gets giddy about going shopping (it happens very rarely for us, as Luke doesn't enjoy it).  When we do go shopping, she will exclaim things in a super-high squeaky voice such as, "those shoes are so cute",  and "oh my goodness look at that pretty pink dress!" Apparently, she also really enjoys trying on "outfits."  I promise you, folks, this girl was not groomed by me to enjoy these things (although I do enjoy the rare shopping trip for something other than groceries).  I guess she was just born this way!

Luke, on the other hand, doesn't enjoy dressing up yet.  But, he has several acrobatic tricks that he enjoys performing.  SO, I may as well end the post with a photo or two of Luke.  Luke was in Awana Cubbies last year (and he will be attending coming up again in September).  It is such a wonderful program.   Many times, at the end of the class, the kids could volunteer to perform their "talents".  Luke tells me this is the one he performed:  the spin jump. 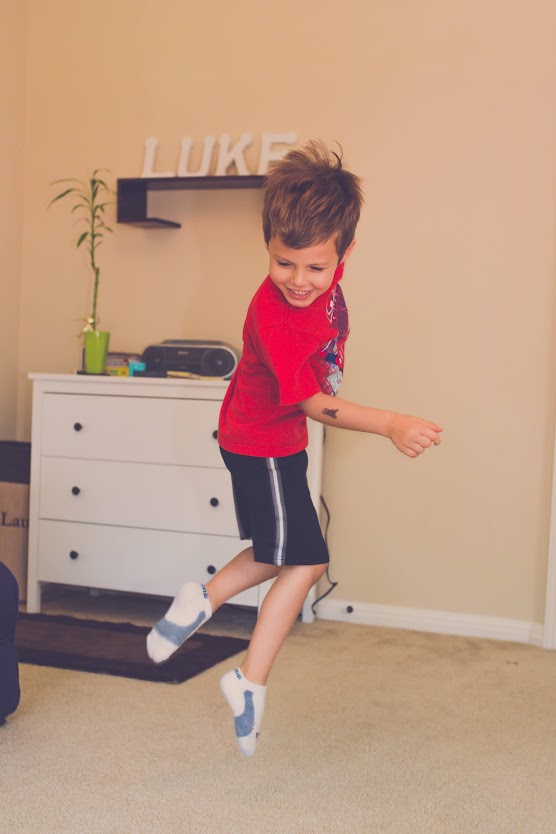 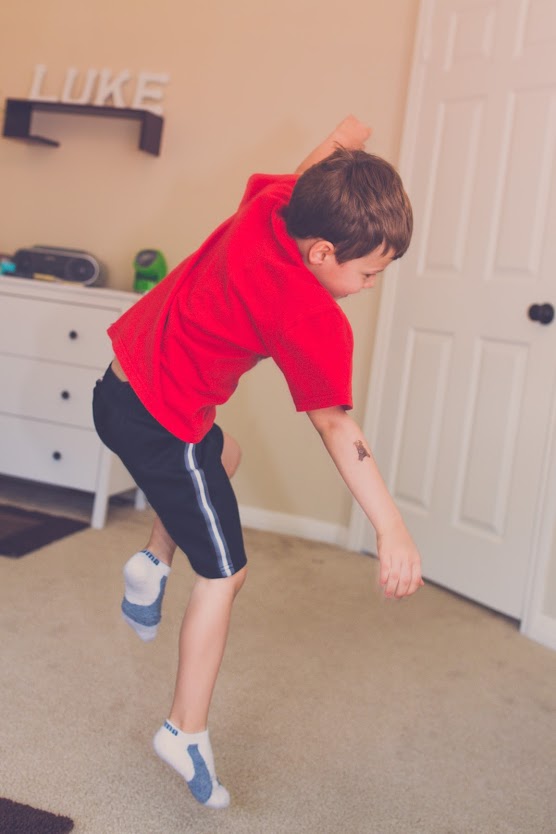 I am so thankful to have this special time with the kids, watching them grow and and helping to shape, mold and teach them.  It is also so much fun seeing their personalities grow and development.
No comments: Links to this post

A Recipe for Some Awesome Toothpaste

Those of you who are regular readers of this blog know that we have been taking a journey towards totally clean living for the past year and a half or so.  Experiencing cancer seems to have that effect on a lot of people--you want to do everything you can to keep it away.  One of the things that we changed soon after we began our journey was toothpaste.

Now, you may be thinking, "why is changing toothpaste important?  It is not something you swallow."  First off, your mouth acts as a vehicle to absorb chemicals into the bloodstream very rapidly.  The time for those chemicals to be circulating in your bloodstream is super short.  That is why there are many pills that you simply place under your tongue.  Second, even though you do not intend to swallow the toothpaste, some of it does get inadvertently ingested.  So, we decided to select toothpastes that we wouldn't mind actually ingesting.  When we first began looking at ingredients in toothpaste, we were shocked by what was actually in the stuff that we purchased regularly and placed in our mouths multiple times per day.

Some of those nasty ingredients found in main-stream toothpastes are the following
When we continued to look for a totally clean toothpaste, we even found that some of the "cleaner" toothpastes we viewed the ingredient list on at Whole Foods and Natural Grocers contained things like carrageenan (which we are staying away from for reasons listed in the link).   So, like many personal care products, we were left with the obvious solution to simply make our own.  And believe me, it is super simple.

The recipe and its benefits:

The recipe we like includes approximately 4 parts xylitol, 4 parts coconut oil, 4 parts baking soda, 1 part Pink Himalayan Sea salt and however many drops of peppermint oil I feel it needs depending on the size of the batch.  There are obviously specific reasons each of the ingredients were selected.  The xylitol prevents decay and assists to remineralize. (Although it has been touted as a "healthy" substitute for sugar in food, I would not use it as a sugar substitute, and I am only using xylitol as an ingredient in the toothpaste for the very specific reasons listed.  Xylitol can, however, be omitted from this recipe if you are not comfortable with using it.)  Coconut oil acts as an antibacterial and antifungal.  Baking Soda is alkalizing and acts as an abrasive (and therefore, teeth whitener).  Himalayan Sea Salt contains 85 minerals, stops bad breath, draws out pathogens and kills bacteria.  And lastly, pure peppermint oil has numerous beneficial properties.  But, it is mainly nice in the toothpaste for the flavor.

We put our toothpaste into little containers that have screw-on lids.   I bought the containers at the local grocery store (HEB) for around $1.  It is super easy for you to put the paste into the container by unscrewing the lid and placing the paste into the large opening.  Then, you screw the lid back on, and the lid with the pop-up cap has a smaller hole where the toothpaste squeezes out.  I have found that, at times, the toothpaste gets hard to squeeze out.  When it does, I simply run the tube under hot water to get the coconut oil to melt a bit.  Honestly, I think when I make the next batch I am just going to store the toothpaste in a small mason jar and use a little metal utensil to place onto the toothbrush.   You can also reuse your current toothpaste containers by cutting off the end of the tube, placing your homemade paste in there and then rolling it back up.  At first, I found the toothpaste to taste a bit salty.  But now, I actually love it.  And, combined with one of my favorite personal care products, the electric toothbrush (Philips Sonicare Easyclean), my teeth feel like they were just cleaned at the dentist each time I brush my teeth. 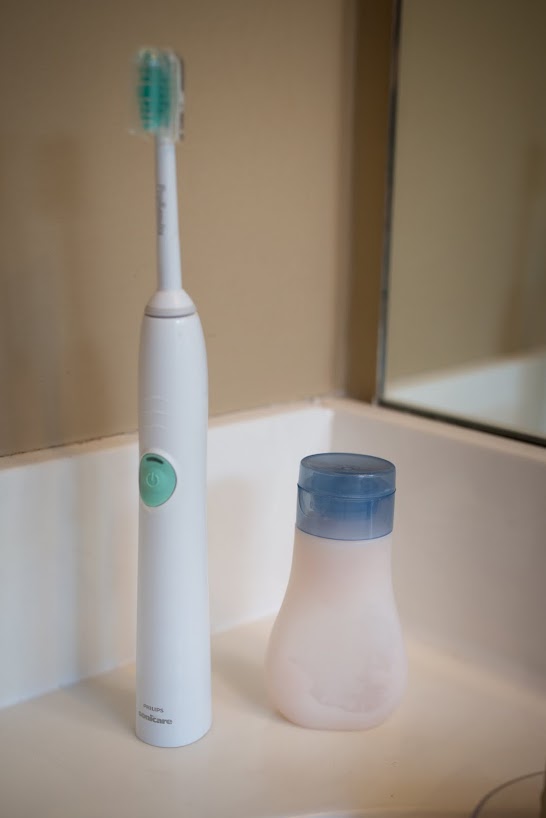 I decided to write up a quick post because I have been meaning to for a while now, and this information is just too good not to share.  Enjoy!
No comments: Links to this post