Drew and I did something last weekend that we have never done before:  we competed in the Spartan Sprint Race.  We have been participating regularly in boot camps through Camp Gladiator since last September.  When they offered an extremely discounted opportunity to participate in the Spartan race, we jumped at the opportunity.  We have been looking forward to the race for the past few months and last weekend, the time finally arrived to participate.  We were so thankful for Drew's parents ,who came up for the weekend and watched the kids while we raced.  Of course, the kids were super excited to get to spend some time with Mimi and Papa as well! This gave us the best. date. ever! We had an hour drive to get to the race, about 30-minutes to an hour to get through parking, get shuttled to the course and then go through registration, etc.  Then, we got to hang out the entire race (1.5-2 hrs), and another 1.5 hours to get back to our car.  Then, another hour drive home.  And, it was all definitely quality time spent together!

What is the Spartan Race you may ask?  When we signed up for the race, which is actually held all over the world, several months ago, we were under the impression the race would be about 3.5 miles long and include 15+ crazy obstacles.  But, a few days before the race, we received an email with our heat time, as well as information about the course.  The information indicated the course was actually over 5 miles long and included 20-25 obstacles.  Just a couple miles extra and about 10 more obstacles--no big deal, right?  The run was no joke.  The obstacles were no joke.  This was a crazy hard course.  But, I had a blast!!!!  If you want to see what some of the course obstacles looked like, here is a video I found from other race participants on youtube of our actual race course.  They included most of the obstacles but didn't really show the running parts (that may be a boring 2 hours if they had):


Running:  The running was never on a straight, simple path.  The course path was rocky, wet, went right through full creeks, super hilly but so much fun.  This is the kind of running I enjoy--it feels so much more like hiking and there was so much to look at along the way. Running in shoes and socks that are soaking wet and had tiny rocks in them from the creeks you ran through though is not ideal.  After one obstacle where we carried heavy sandbags through a long path through the creek, we had so many tiny rocks in our socks and shoes that we (and many others) ended up having to take off our shoes to dump out the tiny rocks.  Drew and I weren't worried about our times, as we weren't looking to win this race.  So, we decided that it was worth extra time to prevent blisters.  The course was absolutely beautiful.  We saw at least 30 different species of wildflowers.  The weather was perfect, and ended up being overcast almost the entire race for us.

Obstacles:
This was the part I was most excited about.  And most were so much fun.  Drew and I were both surprised that on the obstacles where we had to climb up 30 feet or so we were both pretty scared going over the top to the other side.  I think we both realized that one slip of the foot and we could literally fall to our death.  We encouraged each other and got through those parts.  I surprised myself at being successful on several of the obstacles that I thought I would likely fail.  And, if you do fail an obstacle, you have to do 30 burpees (which is also no joke).  Poor Drew failed 3 in a row and had to do 90 total burpees.  I had to do 60 in a row, and then I did 10 for Drew on the 3rd one he failed that I surprisingly completed.  My 3rd failure of an obstacle came later (and he was successful at that one), so my burpees got broken up a little bit.  The hardest part of the course was the final mile and a half.   I am pretty certain they stacked up all the hardest obstacles there together--after you have already run 4 miles and are all wet, bruised up and scraped.  Another of the obstacles I was afraid of was one where you had to climb up to a huge platform and grab onto a rope above a knotted section.  You had to grab on there, because you then used the rope to swing over a large pool of water many feet down below.  If you grabbed below the knot, you would certainly crash into the water.  Drew went first--he crashed about 2/3 of the way across and it looked a bit painful.  People were crashing into that water left and right and moaning afterwards.  I didn't want to get an injury!  Drew was coaching me, "you can do it Heather" he kept saying.  But, I couldn't reach that knot.  It was way too high and far out for me to reach.  The only way to reach it was to jump and hope I had a good grip.  Otherwise, it would be a very hard fall (maybe not even into the water), and would definitely result in injury.  I finally decided to just jump for it. By the grace of God, I jumped, grabbed the rope in the right place, held on the whole time and made it to the other side without even touching the water.  That was totally God's protection, folks, because I foresaw some pretty bad stuff happening there.  Thank you Lord! That was one where I thought I would definitely be doing burpees due to failing.  In fact, I told Drew before even attempting it, I think it may be better just to do the burpees.  But, he encouraged me.  I am so glad I faced that terrifying situation and just did it. 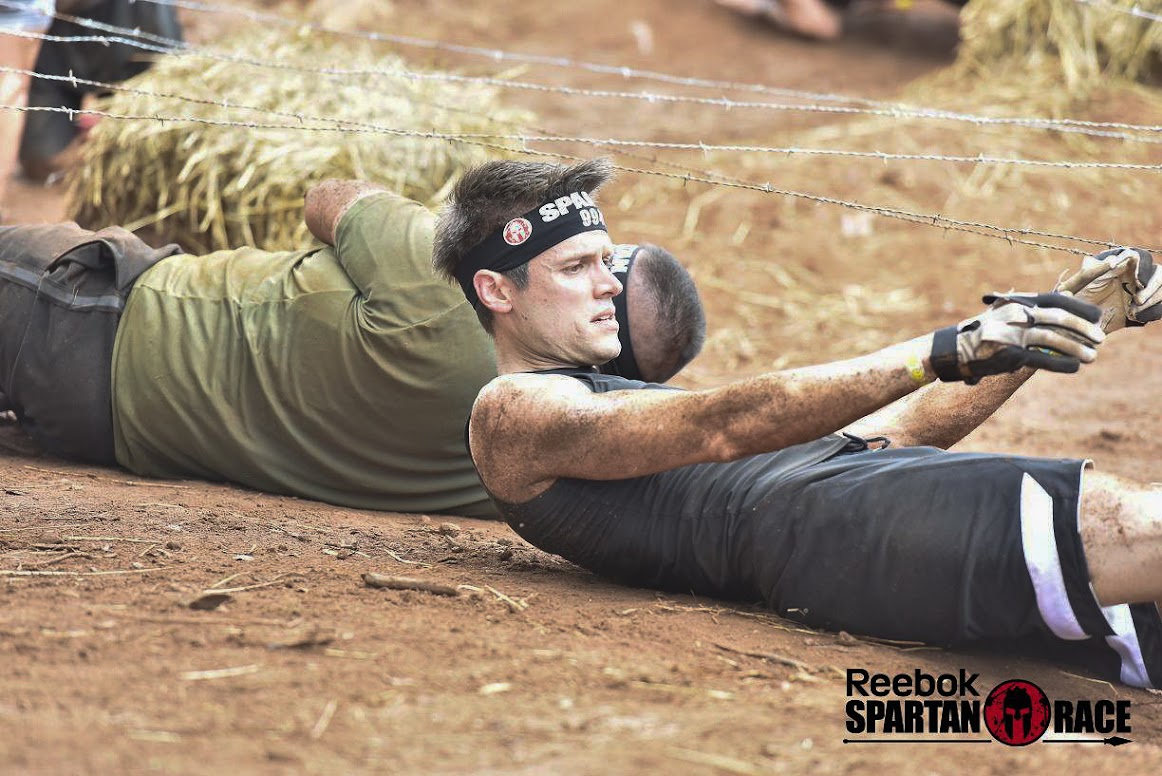 And then, in order to complete the race, you have to jump into a huge pool of muddy water.  In order to get beyond a tall wall that is in the middle of the muddy water, you have to dive under the wall.  That was definitely the nastiest part.  After that, all that was left was a quick jump over fire into another huge pool of muddy water.  Then, there was the finish line.  Volunteers were there to put medals around our necks.  I was thinking, "please don't put that around my muddy neck!"   They did though, and even though I quickly removed it, it is still stained.  But, I guess it added a little additional character and a great reminder about the course! 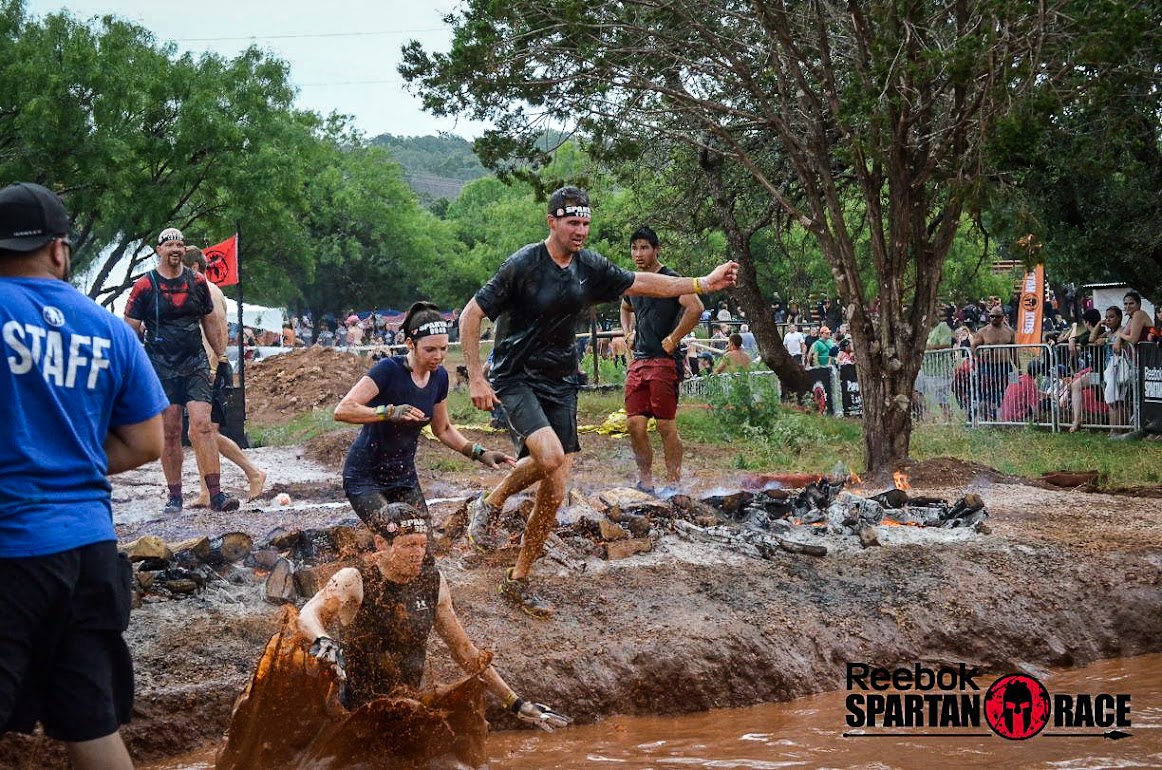 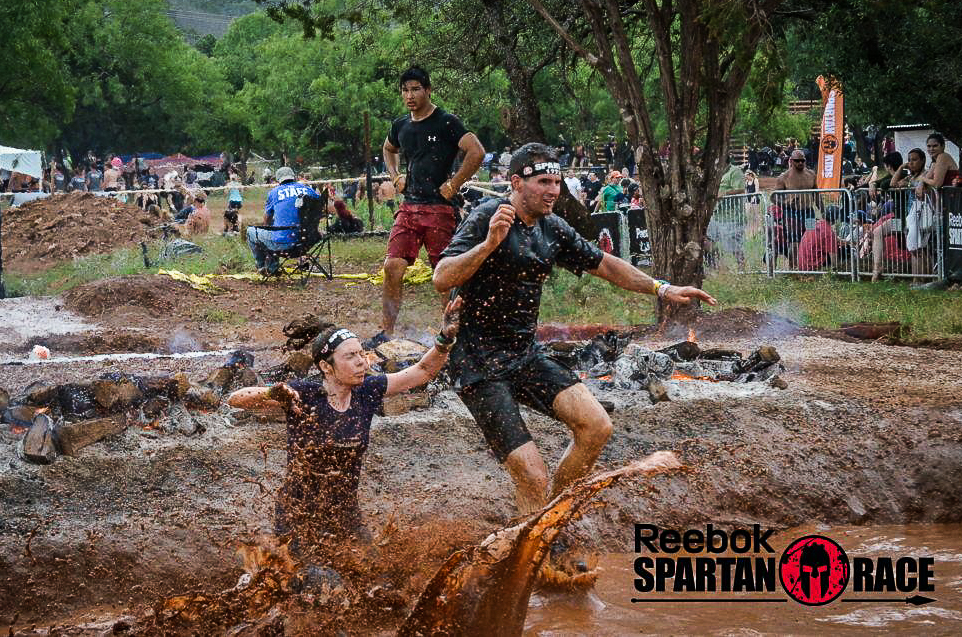 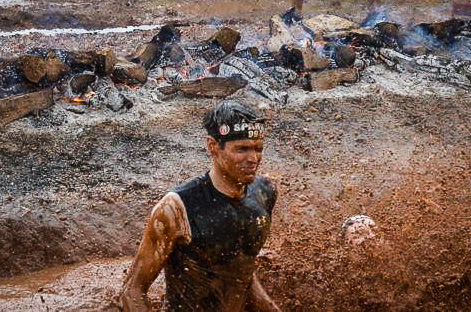 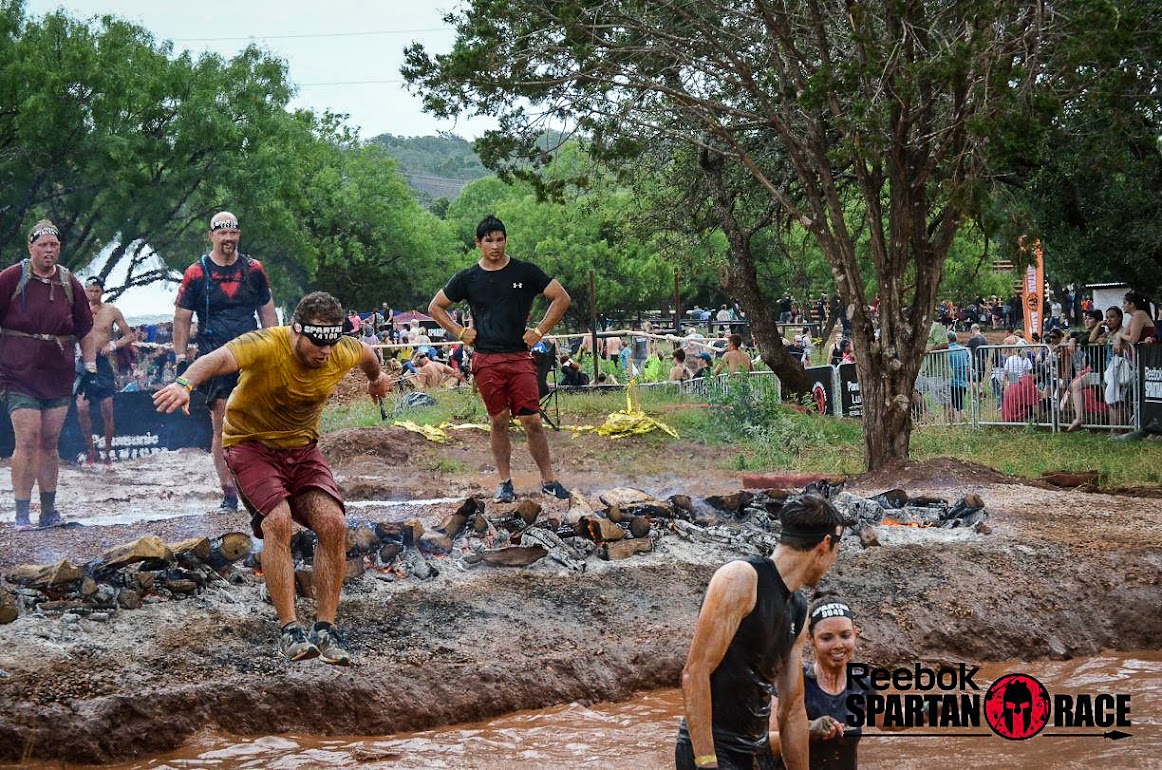 After the race, Drew and I picked up our finisher shirts and then grabbed our bag of clean clothes and began looking for the showers.  We finally found a row of hoses with spray guns attached---these were the "showers."  You just grab a hose and spray yourself down as good as you can.  The water was ice cold.  Then, you make your way over to either the men's or women's changing tent.  This is pretty much a big open area within an enclosed tent (with the sides flapping open to the public).  Each of us women were inside trying to peel off the wet spandex as discretely as possible.  I imagined myself getting stuck trying to remove my tight sports bra with prosthetic breasts attached inside and needing assistance.  I imagined someone trying to help me after seeing me struggle for a bit by pulling the sports bra over my head and then realizing "Oh my goodness, your boobs are coming off."  After thinking through all that, I decided to dry my sports bra off the best I could, and just leave it on, putting a clean shirt on top.  An hour and a half later when we finally found our car (funny story), I would more discretely remove my bra and prosthetic breasts.  Oh, the life of a breast cancer survivor who had failed reconstruction.


That was definitely the hardest workout I have ever done.  Now, you may ask, "why in the world would someone sign up and pay money to do such a thing."  Honestly, I asked myself that around mile 2, but the thought quickly went away.  Then, I asked it again around mile 4.5.  But, then once you complete the race, it feels like such a huge accomplishment.  I am so thankful to be alive.  I am also so thankful God has given my body the ability to do such things.  My body has been through so much over the past few years, so it definitely was a big milestone for me.   Drew asked me in the car on the way home if I was ready to do it again next year.  When he asked me, as I sat there with a tired body I thought "I can't imagine that."  But, then about 10 minutes later, I got really excited about the next race!   I equate it to having a baby.  Right after you deliver a baby, if someone were to ask if you were excited to do it all over again, your answer may not always be "yes".  But, soon, your body forgets about the pain and lack of sleep, etc., and you are excited to do it all over again.  I am so glad the Lord created us to easily forget physically painful events, so that we can move forward and go through them again.  Otherwise, our world would look much different, ha!

I will finish with an explanation of the title of this post.  When we were getting ready to race, the announcer gave us some motivational words.  When he said certain things, the race participants responded with "Aroo Aroo!"   I had no idea what I was doing, but I said it anyway.  I had to look it up later.  Apparently, "Aroo" is the Spartan's response to their king's call for strength.   Thank you Lord for the strength to complete such a fun race!

We are excited to race again next year!