The past week has been very successful in getting some big things on my enormous to-do list checked off. We organized our garage about a month ago or so (that was a big thing on our to-do list).  However, there were a few things in the garage that still needed to be addressed in order to have a fully clean, organized garage.  First, I had purchased a table a month or so after we moved into our home.  My intent was to remove the nasty seafoam green paint on the top of the table, sand it, stain it, and then refinish the beige-painted pedestal base by painting it with Annie sloan chalk paint.  With two kids though (that are home all the time) and many, many other projects on our list that were a bit higher priority, I had to refinish the table in pieces, as time permitted.  Well, that table had been sitting in our garage for the past few months and was sort of annoying in the amount of space it took up.  In addition, when we lived at our previous home I had purchased an old but cool antique mirror form someone on craigslist for $10, with the intention of repainting it for Abbey's room.  I have been waiting until I believed Abbey would appreciate it.  So, that too has been sitting in our garage.  And lastly, after we moved there were several things we no longer needed, that I intended on selling.  In addition, there were many items that had collected into a "donation" pile.   I got on a roll last week and finally finished the table, cleaned, painted and waxed the mirror, and got rid of all of the extra things in our garage (sold and donated)!

I am excited about how the table turned out and am thrilled to share the before and after photos.  First, I wish I had a photo of what our previous table looked like in our current kitchen dining space.  The table is one that Drew had as a bachelor.  It was a nice table, but it is the one piece of furniture of his that I really didn't like when we combined furniture upon marriage.  All of our other furniture went so well together...then there was that table.  I call it the "big, orange table."   Reluctantly, I sold my cute table (Drew thinks I remember the table being cuter than it actually was) that I had in my kitchen when we got married, and we moved his big orange table into the space.  It didn't look terrible in the space, so I was okay with it being there temporarily (this was in 2008).  Then, in the summer of 2009, we moved into a new home.  It was the first home we purchased together.   We both agreed that the table didn't work in our kitchen dining area.
It was much too large and didn't match any of our other furniture style.  However, we thought we would just wait until we got settled into the home and figured out what we wanted.  Then, we would list it on craiglist and look for a new (to us), used table.  But, kids were born, life got busy, and we continued to use the big orange table.    Six years later and we were still using that table.  So, when we moved into this home, one of my first missions was to find a table that would work better in our new kitchen.  I knew exactly what I wanted.  I showed photos to Drew, who agreed on the style.  I procured the table on craigslist (for a great price).  And I dreamed about how I wanted to refinish it.

It took a lot of elbow grease to remove that paint and stain the top.  But, I really wanted a stained top.  If I had chosen to use the Annie Sloan Chalk paint on top, I wouldn't have had to sand, scrape, prime, or anything.  Annie Sloan chalk paint is awesome for so many reasons:  you never have to prime, sand, or remove the old finish.  You paint right over it.   Also, usually, you only need one coat, so it requires so much less work than other finishing options.  All of these awesome reasons were in the back of my head as I put so much effort into refinishing the top.  It would have been so easy to just quit and paint the top.  But, I am glad I didn't.  I love how it turned out!  Here is the process I used to refinish it:

Top:  I stripped the paint, sanded, sanded and sanded.  Then, I stained it...3 times.  Unfortunately, it wasn't until after staining it, that I found some tiny bits of paint were still on the table top.  They were difficult to see on the unfinished top before staining.  So, I resanded a few areas and applied stain...again.  Then, I applied 3 coats of polyacrylic (spray--for an even coat), sanding in between coats.   Then, the rest was easy.  I ended up applying two coats of Annie Sloan chalk paint in white on all the other parts of the table (other than the top).  After that dried (it dries very quickly), I applied the Annie Sloan clear wax.  I waited 24 hours and then buffed the table.      Here are some photos of the finished product: 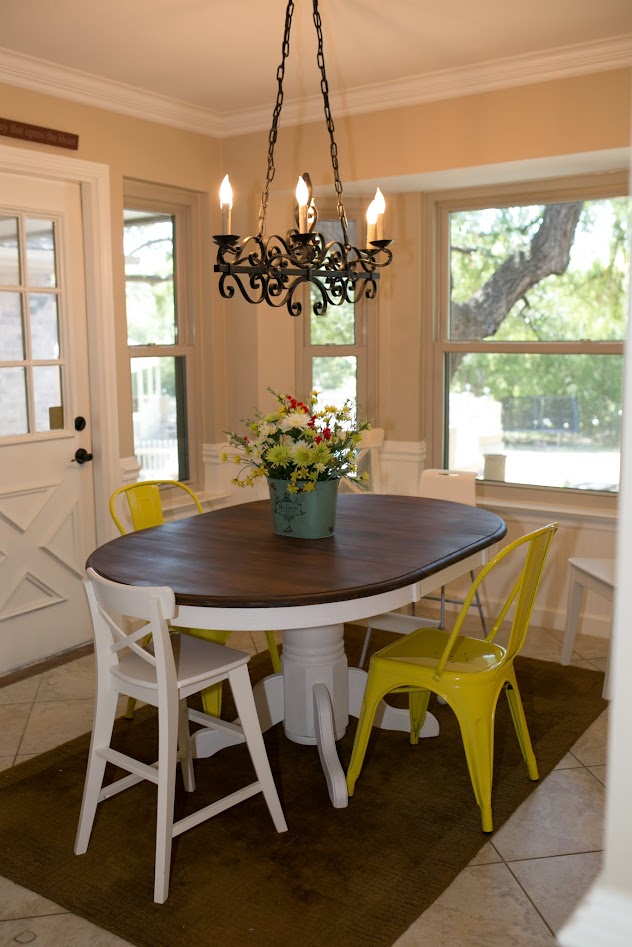 I found the cute metal container (centerpiece) at Ross for $4.99, then made an arrangements from some flowers I picked up in the 70% off clearance section at Michael's.  I wanted to bring in a little red since we have a lot of red elsewhere in our home. 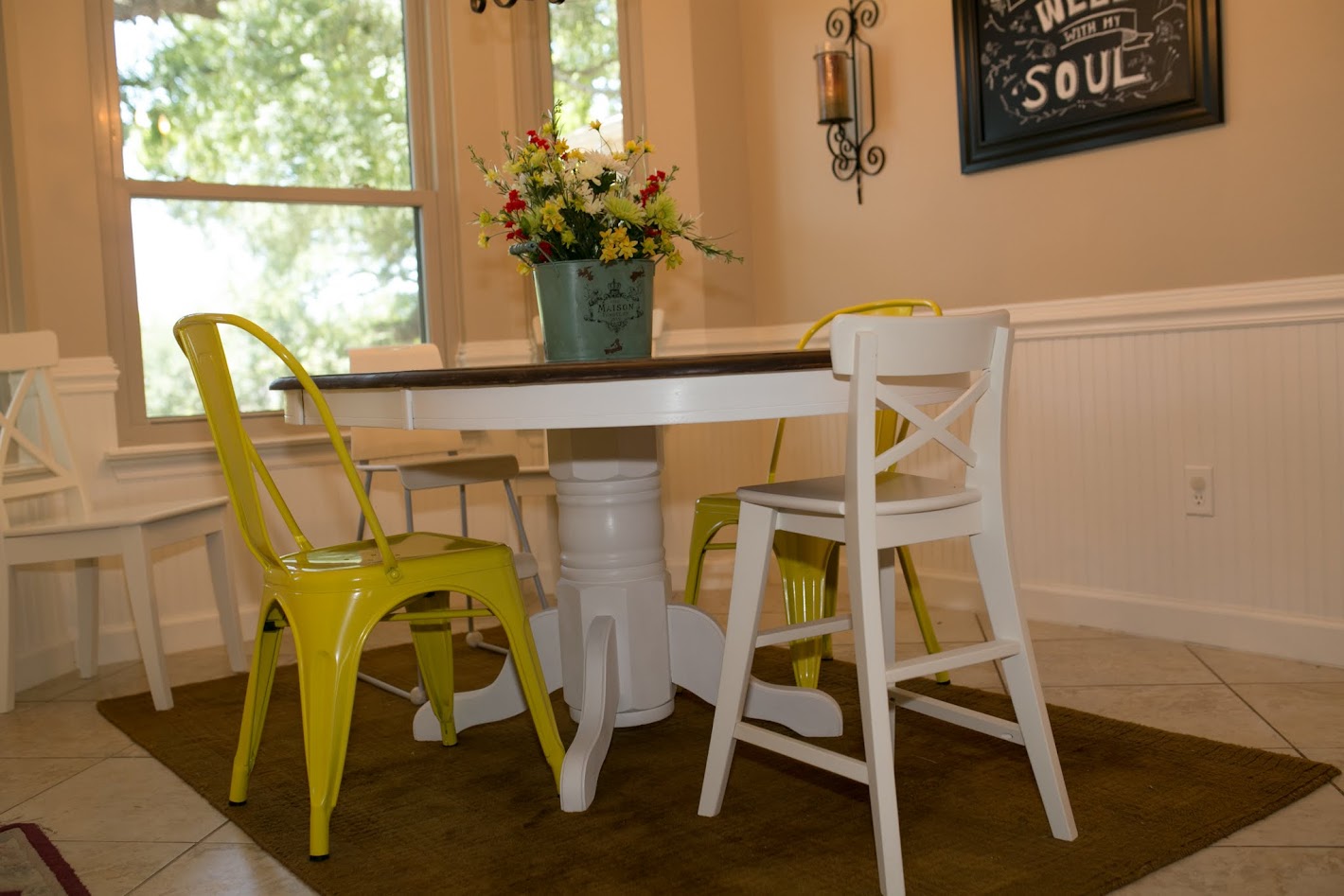 We found the fun yellow metal chairs at TJ Maxx for $29.99, which I think is a pretty good deal!  Both Drew and I fell in love with them as soon as we saw them and knew they would be perfect!


As I was setting things up to apply the wax to the table last week, I decided, why not just bring that old mirror in and paint and wax that too.  I decided this after experiencing just how simply the Annie Sloan paint was to use and how quickly it dried.  So, one morning, I applied a couple of coats of paint to the mirror after cleaning it up.  Then, I waxed our table while the mirror dried.  Then, after I completed waxing the table, the paint was already dry on the mirror, so I waxed the mirror.

Later that day, after buffing the waxed mirror, I applied some hanging rings to the back of the mirror and hung it in Abbey's room.  She was so excited!  That girl loves fashion.  She often tries outfits on and eagerly runs to our standing mirror (in our master bedroom) to check herself out.  So, I know she will love this new mirror.

Here is what the mirror looked like before painting. 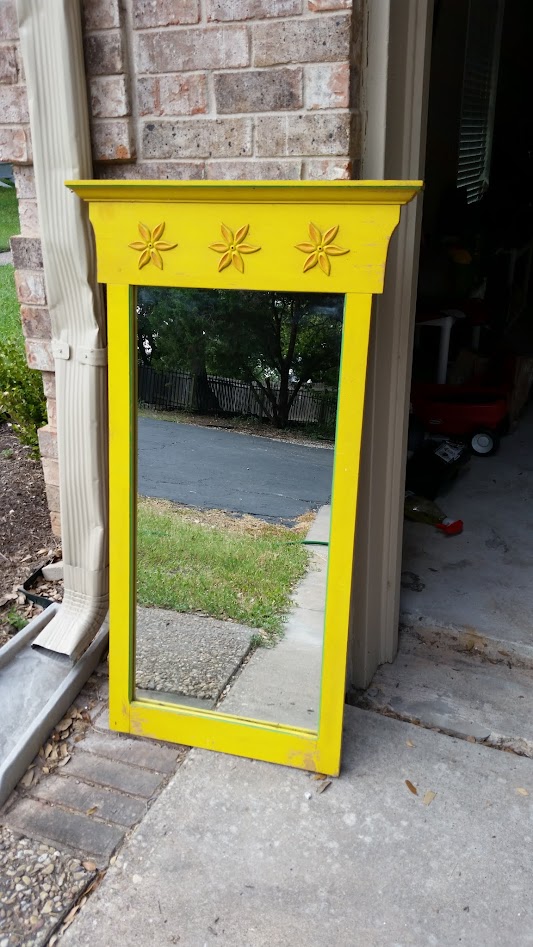 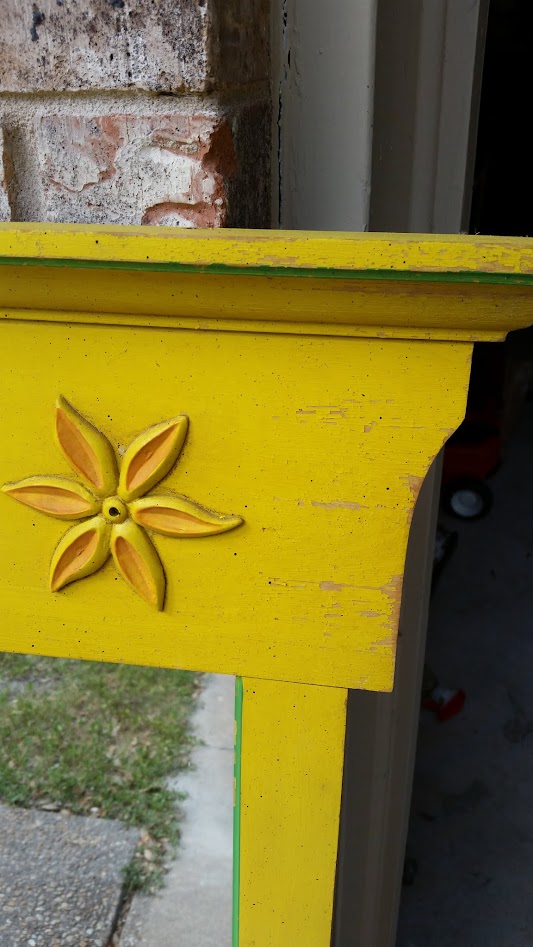 I actually liked the color, but it definitely wouldn't have worked in Abbey's room.  Plus, I was concerned about the paint being lead-based, since it is a really old mirror.

Here is the refinished mirror, hung in Abbey's room. 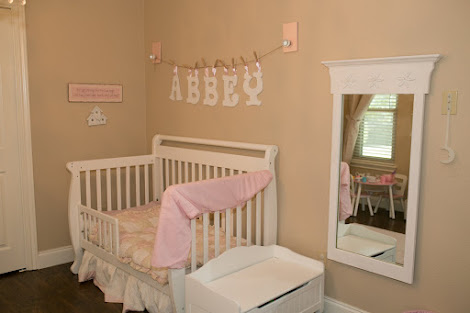 Here is the rest of Abbey's room. 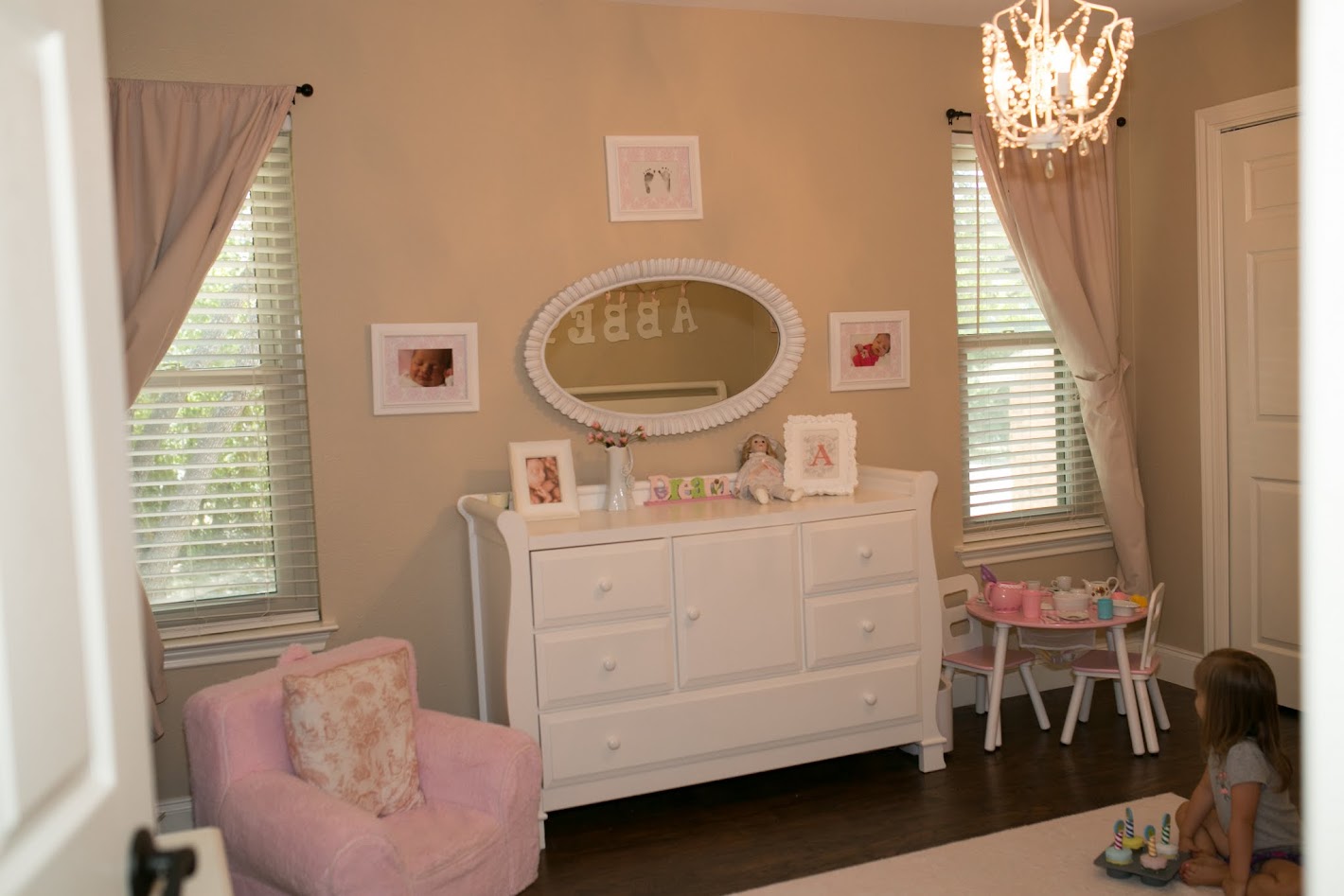 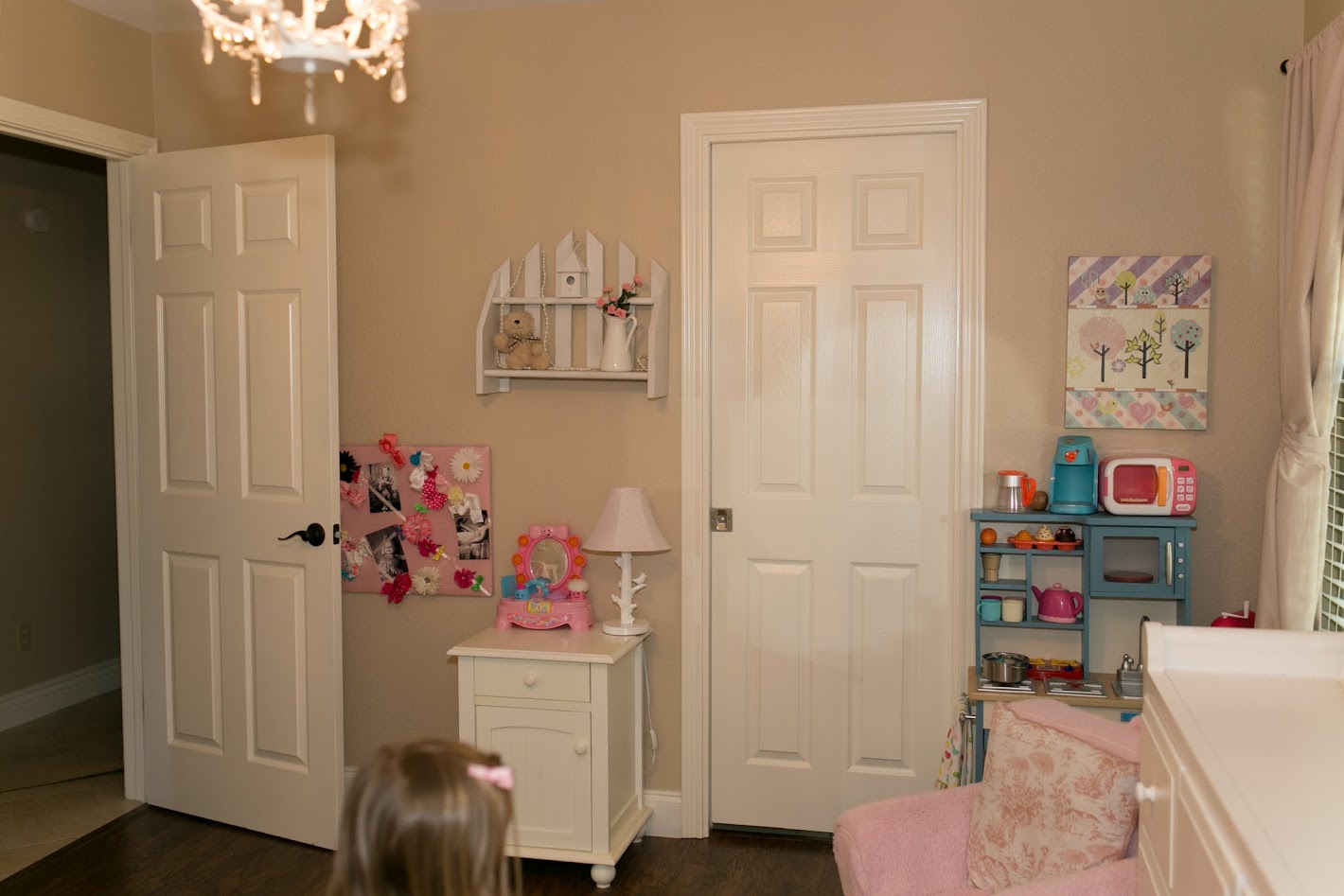 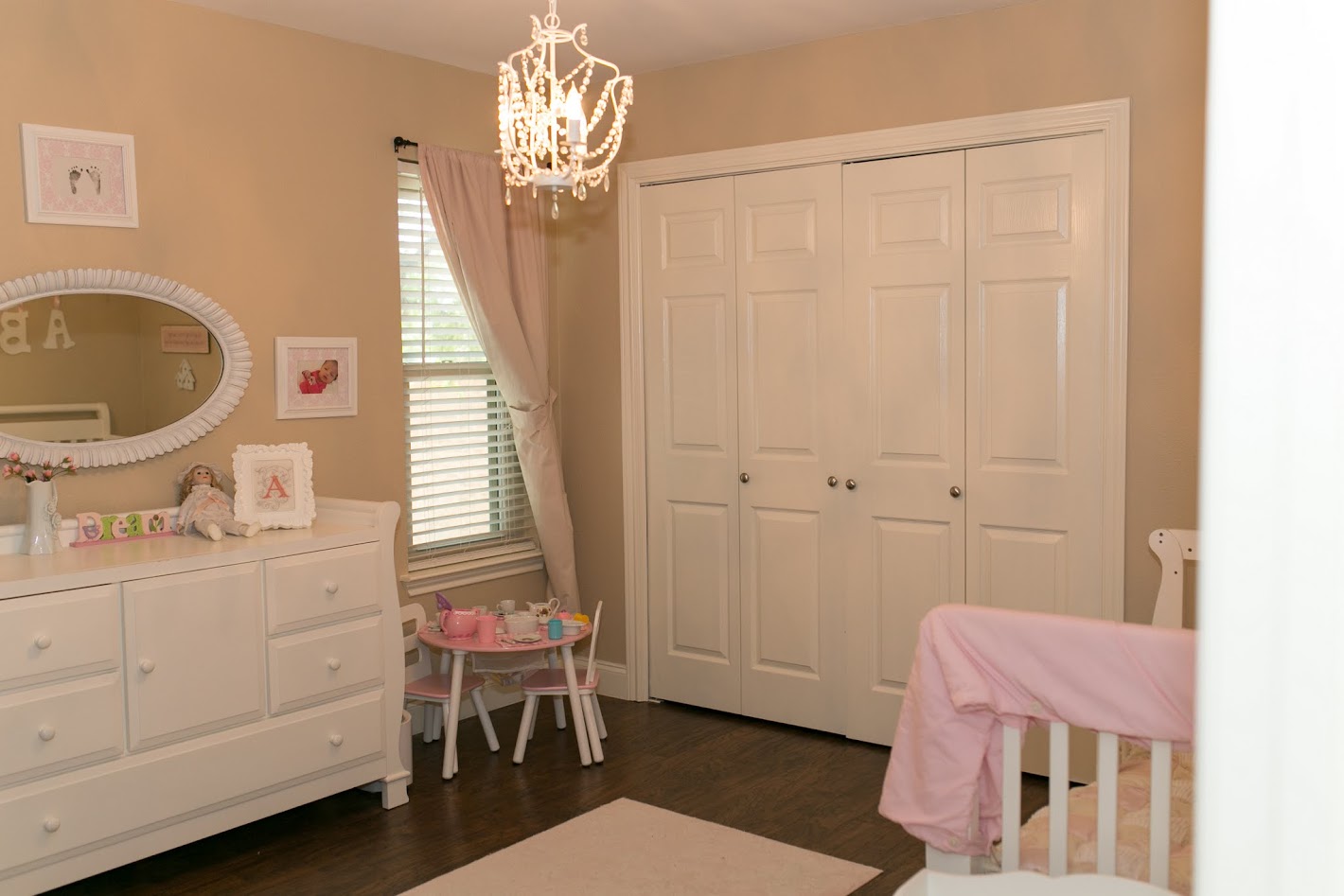 The mirror works perfectly in there.  Also, it makes her room feel larger and more open.  It is crazy that simply hanging a big mirror can make the room feel that much larger!

By the time the weekend was over, everyone had picked up the items we had for sale, and we had donated the other items.   (Except for our big orange table--that is still for sale and is currently in our front living room (which will eventually be a reading room).  If you know of anyone who is interested in a nice, solid wood table, it is for sale!)   Our garage is now organized and rid of the extra items we no longer need.  Also, we started on another fun project--a tree swing!   Hopefully we will have pictures of that fun project soon, when it is complete!