I miss my mom so much!  My mom is not the mom I have known my whole life.  An awful disease, Creutzfeldt-Jakob Disease (CJD), has taken her from me and the many people who love her greatly.  I have been wanting to write a post for so long to honor her.  I just wasn't ready to completely talk about her condition.  But, I want my kids to know who she was--she is the best mom ever!  So, it is definitely time for a thorough post.  Here it goes... 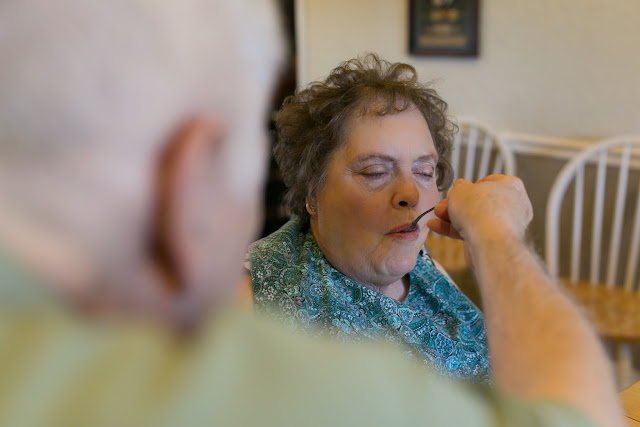 She has trouble swallowing and, at times, breathing.  They began giving her oxygen yesterday. Yet, her sweet, sweet spirit remains.  She doesn't talk at all, yet we brought her to church on Sunday, and I looked over down the pew and noticed her mouthing every single word to the worship songs and hymns we were singing.  The Holy Spirit is definitely alive in her.  This, of course, gives me hope. 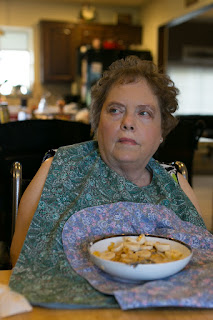 If you want to read more about this disease, click here.   I certainly wished she were diagnosed earlier, as that would have given me more time with "her."   There are so many questions I have that I wished I had asked her when she could speak.  This saddens me.

The mom I know...
I don't want to end the post here though.  Although this disease has taken my mom, I have so many wonderful memories of who my mom truly is.  Here is an excerpt from a post I wrote a few years ago about my mom:

"My mom has the best memory of anyone I know.  She can tell me what I was wearing 20 years ago on our family vacation.  OK--maybe a bit of an exaggeration, but her memory is crazy sharp!  So, with a memory like that, she can recount specific challenges she had with us [as a young mom] and how she dealt with them.  My mom also didn't have it very easy.  I was born, then 11 months later my identical twin brothers were born, then 2.5 years later my sis was born.  And, the closest family members were about 5 hours away.  They had no help in raising us.  My dad worked very hard.  When we were young, he probably averaged 60-70 hours of work per week.  So, this sounds pretty difficult right?  Four kids, ages three and under, and no family in town to help out or provide "relief" when needed.  Then how in the world did she make it look so easy???  I can tell you that I NEVER recall my mom raising her voice.   We ALWAYS ate an excellent home-cooked meal with all four food groups on our plates.  We VERY RARELY ate out (maybe once a month on a Sunday after church).  She chauffeured us from activity to activity.  I also remember my siblings and I laying on the floor (I must have been 4 or 5 years old) all in a row while my mom rubbed our bellies before nap or bedtime.  Then, she would carry us one by one to our beds.  We all felt loved.  She is my inspiration.  When I am having a tough day, I just think about my mom and how she had it so tough, but made it look so easy.  She never appeared stress.  I think this is so important in raising our children.  So, instead of relying solely on the internet for parenting advice, I go to my mom.  I combine her advice with some Biblical wisdom and hopefully I have a good recipe for raising these special blessings God has given us."

There are so many words to describe my mom:

Of course, there are many other words to describe her.  But, this post is getting long.  This past weekend, we were going through old pictures and videos as a family.  I decided to scan some of the photos in today.  In doing that, I found so many pictures of my mom as a child, teenager and before she was "our mother."  I then decided to honor my mom by doing a little slideshow of her growing up.  The songs that accompany the photos are kind of random--except for the last one, "It is well with my soul."  That one is her favorite song, and in early August, she was belting that song out in the prettiest voice I have ever heard her singing in.  I love you so much, Mom!  Here is the little slideshow I put together: