So much has happened in the past month.  One of the big happenings was when Luke broke his arm.  Of course, I wish that wasn't on our list of happenings. He broke it about 4.5 weeks ago.....at the local Children's museum.  He was playing with some friends, and a friend was chasing him down a tunnel in the museum's rope playscape.  As he was trying to come down the rope ladder his friend was trying to tag him and Luke fell backwards off of it.  Luke is so competitive, I guess he would rather fall off the ladder than get tagged.  Hmmmm, I wonder where he gets that character trait?  Anyway, he landed with all of his body weight on his left arm.

I heard the scream and knew right away his arm was broken.  A momma knows--especially when she has heard that exact scream before....for the same arm...which was also broken (remember when Luke was 15 months old?)  He broke a different bone than last time though--last time, the ulna, this time his radius.  When he came over to me, I noticed right away his arm was bent.   The employees at the children's museum were wanting to keep me there while Luke was screaming until they got someone to come help.  I am not really sure what that "helper" was planning on doing--they weren't going to be able to put a band-aid on it, or put the bones back together.  So, we dashed out of there quickly, grabbing an ice pack on our way out.  They did ask for my name (I am sure for liability purposes) on the way out though.   Thankfully, we were right next door to the big children's hospital.  All the way to the parking garage, as I was pushing Luke in the stroller, Abbey was screaming louder than Luke (who was writhing in pain).  Why, you may ask, was she screaming so loudly?  Was she hurt too?  Abbey was looking forward to going upstairs in the children's museum to the pretend farmer's market.  Her plans were cut short.  You would think if you heard the two of them though, that they both had broken their arm.


Initially when the ER doctor looked at his arm, he suggested to us that Luke would probably need surgery (this was prior to the X-ray). The concern was that Luke's arm was so obviously deformed and it was close to his wrist.  Praise the Lord though--no surgery was needed.  However, Luke did need to be fully sedated, because the medical team had to perform a reduction on the arm, to line the bones back up, prior to casting the arm.  Sedation was bad.  Luke had just had lunch not too long before he broke his arm.  When I told the doctor that he had broccoli, cauliflower, apples, and peanut butter and jelly for lunch, he didn't seem too concerned.  However, the doctor only asked what he had for lunch.  If he had asked what else he had eaten earlier that day, I would have given him another long list.  Unfortunately, after Luke's arm was reduced, the cast placed, and he came out of sedation, he spewed everything that was once in his stomach across the room.  And, I know this is really nasty, but I must tell you it was not like normal vomit.  It looked like an entire loaf of bread that had been soaked in water.  He began choking on it, which really scared me.  I was concerned he may aspirate some of it.    The medical team was shocked at how much was in his little stomach.  I am not going to lie--even though I fed him all of that food, I was shocked at the amount also.  He must have a very large stomach!  We had to wait at the hospital a very long time, to make sure that Luke could keep water down, before they would allow us to leave.  How do you entertain a 3-year old for many hours at a hospital?   Well, we used the curtain that was in the room and took turns (Drew, Abbey and I) performing. For example, I would announce Abbey (who would be standing behind the curtain), "Ladies and Gentleman, boys and girls, presenting, the talented dancer, Abbey Lee."  And then, Abbey would perform. 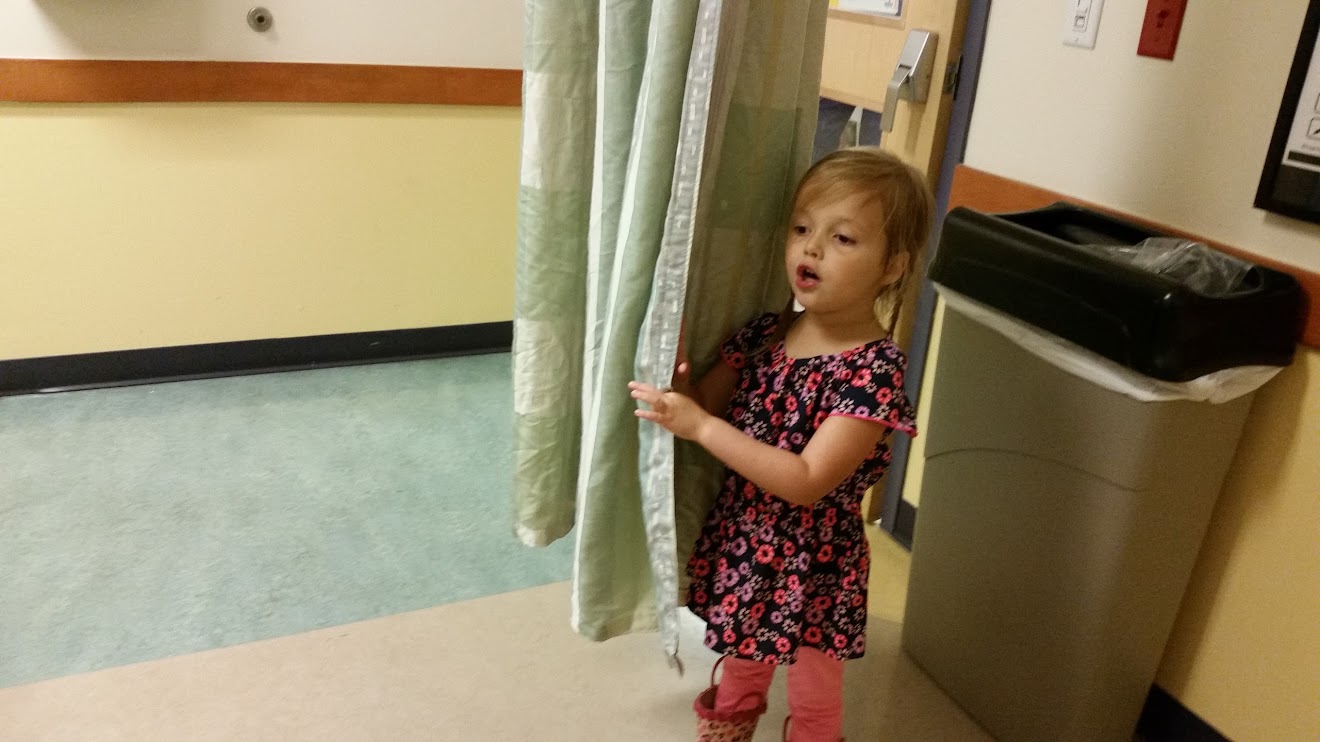 Under that brown bandage, was Luke's cast, which had been cut open.  Leaving the bandage on for about a week allowed the arm to swell and then go back down to normal size.

Then, a week later, he had the fiberglass bandage wrapped around it.  He was able to select any color he desired.  He picked "red".  This was his favorite part of having the cast. 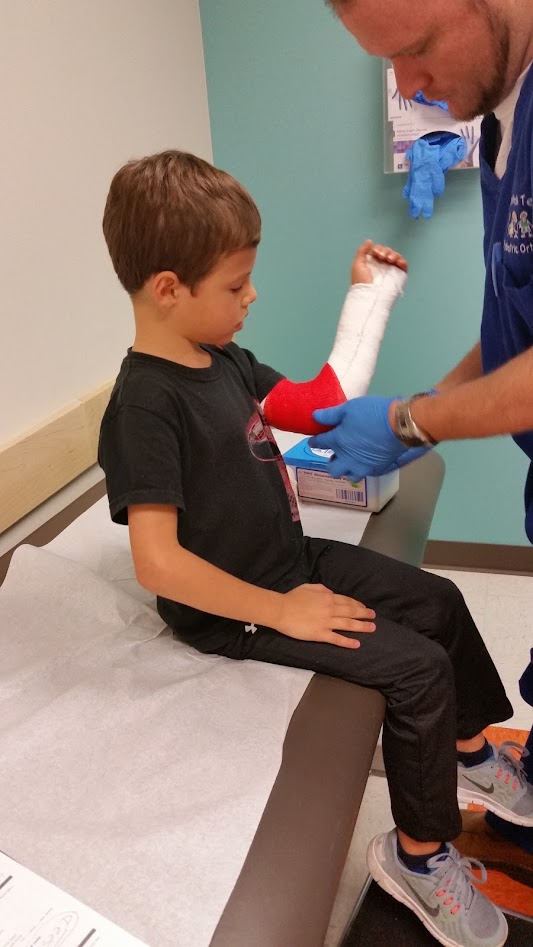 He had this full arm cast on for another 3 weeks.  Then, on Thursday, he was able to get a short arm cast!

Once again, he got to select the color that he wanted for his new cast.  This time, he selected, "tree green."   He had the option of stripes or whatever he wanted (the technician was a cast artist), but he chose simple green.  He is pretty proud of his new green cast.

Do you know how tough it is to be a 6-year old boy and be in a cast?  Being in the cast has prevented Luke from doing so much that he loves to do.  He can't play sports, he can't run, he can't play on the playground or jump on the trampoline, he can't ride his bike or scooter.  The only physical activity this extremely active boy is allowed to do is walk.  Although, as you can see from the photos below, the cast has not completely stopped Luke from having fun. The most difficult part for Luke has been at his one-day homeschool enrichment program.  In P.E., he has to sit and watch, while all the other children participate.  Also, at recess, all the other children run around and play while Luke sits. Luke says last week he sat on the teeter totter (he probably shouldn't have), and no one would sit on the other side and play with him.  That just breaks my heart.  I ask him how is day was, and he tells me about all the good stuff, and then there is always the sad story about how no one would play with him on the playground.  He is SO looking forward to getting this cast off.   He is in this short arm cast for another 3 weeks and then gets a brace.  He will probably be in the brace for another 4 weeks.  And then, guess what?   We are going skiing!  I asked the doctor about it.  She said she is alright with Luke skiing, with the brace on, with no poles.  He is not allowed to snowboard though (which is what he had his heart set on).   We are stoked about this ski trip!!!  I told Luke that he gets his cast off for Christmas--what a great Christmas present!   He quickly replied, "No, I don't want that to be my Christmas present!"  Ha!  He was concerned that was all he would be getting for Christmas.  I, personally, think it is a pretty great gift, but I reassured him it wouldn't be the only gift he receives.  :-)