Saying Goodbye to My Mother

Those of you who have been following my blog for a while are aware of the devastating diagnosis my mom received less than a year ago:  Creutzfeldt-Jakobs disease (CJD).  It is an awful disease, which wreaked havoc on my mom's body until she left us on October 14, 2015.  We are thankful she is no longer suffering, but miss her immensely.  I am thankful I was able to say goodbye to her in person, and that Drew, Luke, Abbey and I were able to spend her last days with her.  I wrote a post in October that talked a bit more about my mom's disease progression.  Here is the rest of the story of the my mom's final days.  We left from our home in central Texas on Luke's birthday, Sunday, October 4, to travel to Oklahoma and see our family--especially my mother, who was transitioning from this life on earth to life with our Heavenly Father in heaven. We were concerned then that we would not make it to get to say a final goodbye before she passed, based on news we were given on Friday afternoon that the nurses didn't believe she would make it through the weekend. But, she made a miraculous recovery and we were able to spend some special moments with her. We stayed with them for about a week (until Friday), and made a tough decision of heading back to our home to take care of some things before returning back. We were at our home for just a few days, and came back to Oklahoma on Tuesday, October 13.  We got to spend Tuesday afternoon at the Clarehouse, where my mom was staying.  She had not eaten or drank anything for days.  We knew she had to be in her final days/hours, because the body cannot survive too long without water.  My mom had oxygen to assist her breathing, and morphine (although not that frequently) for pain.  She looked a lot different though than she had the previous week--much worse.  Her breathing was very labored--she took many frequent short breaths.  She had not said anything for days.  She did say, "what?" when my dad said her name and when her brother said her name on that Tuesday, but that was the only word murmured for days.  From all that we have read and heard though, although she couldn't speak, we felt she could hear and understand us.  We made sure to talk to her a lot.  I told her how she was the best mother ever!  I told her that she was such an inspiration to me, and I strive to be like her in so many ways.   I told her a bazillion times that I love her.  Although, I know she knew that.

On Wednesday morning (10/14), my brother and I were there at the Clarehouse with our kids.  My brother, Jeremy, and his wife, Brandy, are both teachers and their fall break began that day.  We spent hours there with the kids, but decided to take them home for a little while that afternoon to feed them and let them run around.   When we left my mom, it appeared that it may still be a day or two before she passed.  We got a call that same afternoon at 4:15pm.  My sister, had just received a call from my dad and said that if we wanted to see mom one more time before she passed, we needed to head up there immediately.  My sister was the farthest away, so my dad called her first, and then she called me (My brother Jeremy was with me).  We then called my brother, Jason.  Jason, was getting off work at 5pm, and had to drop his son off at home before going to say goodbye to mom.   Jeremy and I were the first to arrive, since we were closest.  We were shocked when we entered the room and saw our sweet mother.  She looked dramatically different.  Barely breathing.  Her head was leaned far back with her eyes rolled behind so all you could see were the whites peeking out of the small openings her lids created.  Her coloring had changed.  We knew we were going to witness her final breaths then and there.  We began telling her stories, sharing our favorite memories with her.  I told her again repeatedly how much I love her.  I told her that her love would live through us forever.  I told her that her grand kids would know of her great love for them, even through our love.  I told her we would be okay.  I told her we would take care of dad (I know he says he can take care of himself, but we all knew it would give mom peace to hear that--as she was such an amazing caregiver of him).  Holly arrived as the end was drawing near, and she saw what we thought was her last breath.  We told mom that Jason was on his way.  But, we all felt like she took her last breath.   A minute or so later, Jason arrived.  When he asked if she had already passed, we all said we weren't sure.  But, again the thing is, we really thought that she had left us already.  He approached mom.  He said something to her and she took a big final last gasp.  He got to see her final breath and tell her he loved her.  She "rallied" again so that all four of her children could say goodbye and have closure.  Mom was always thinking of everyone else!  Mom passed away at 5:45pm on Wednesday, October 14--4 days before her 67th birthday and my parents wedding anniversary.  We miss her immensely!  We were talking in her room shortly after she passed about how in 1 Corinthians 13:4-7, the word “Love” could be replaced with our mom's name and be completely accurate:  “Mom is patient, Mom is kind. Mom does not envy, Mom does not boast, she is not proud.   She does not dishonor others, and is not self-seeking, Mom is not easily angered, and keeps no record of wrongs.  Mom does not delight in evil but rejoices with the truth.  She always protects, always trusts, always hopes, always perseveres.”  I could give you countless examples of how her name could accurately replace each of these phrases, yet the blog post would be far too lengthy!   I suspect that there will be a post like that someday though.


The following day, we released one of the butterflies from the habitat at Clarehouse in memory of mom.  We geared it towards the kids, so all mom's grandchildren could have their own ceremony for closure. 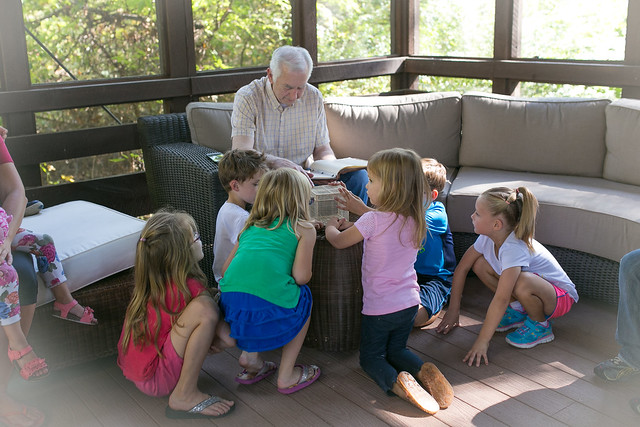 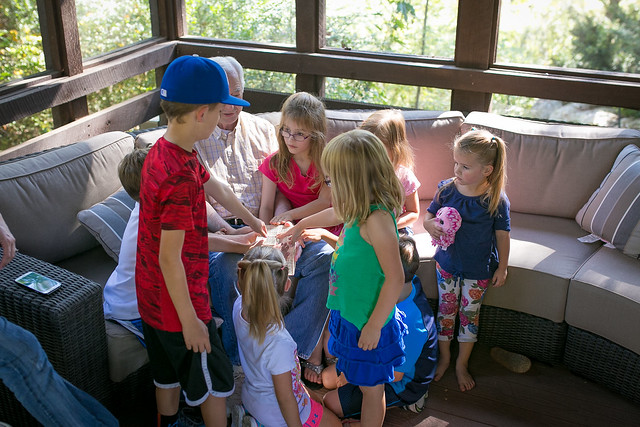 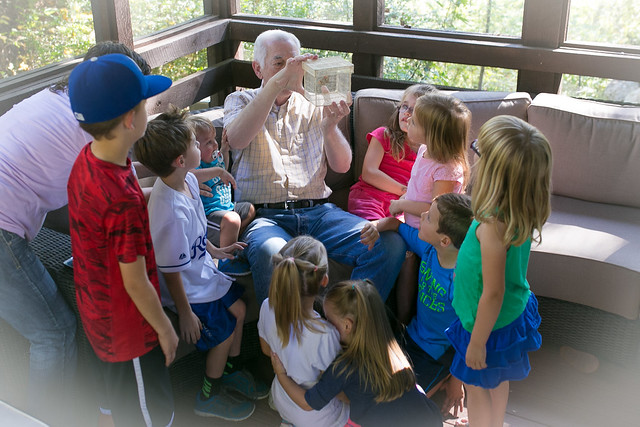 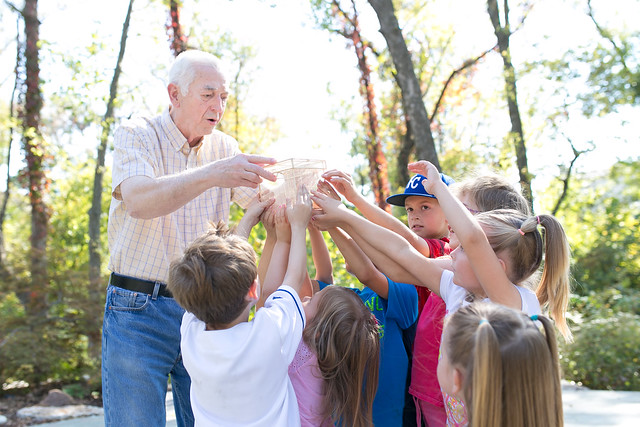 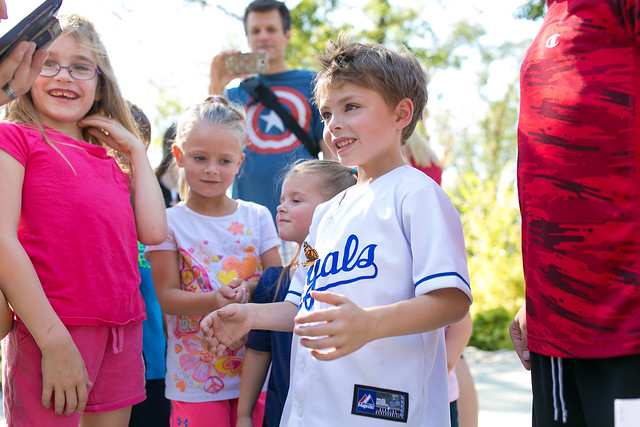 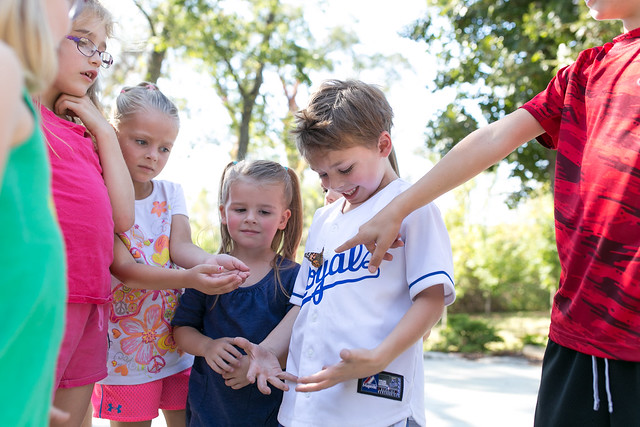 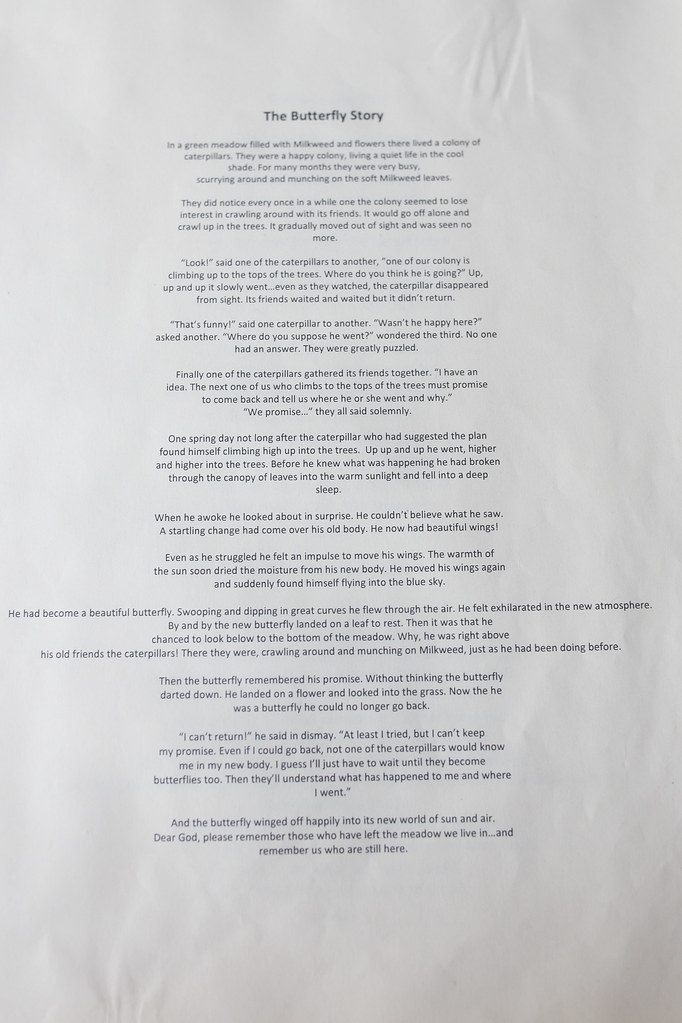 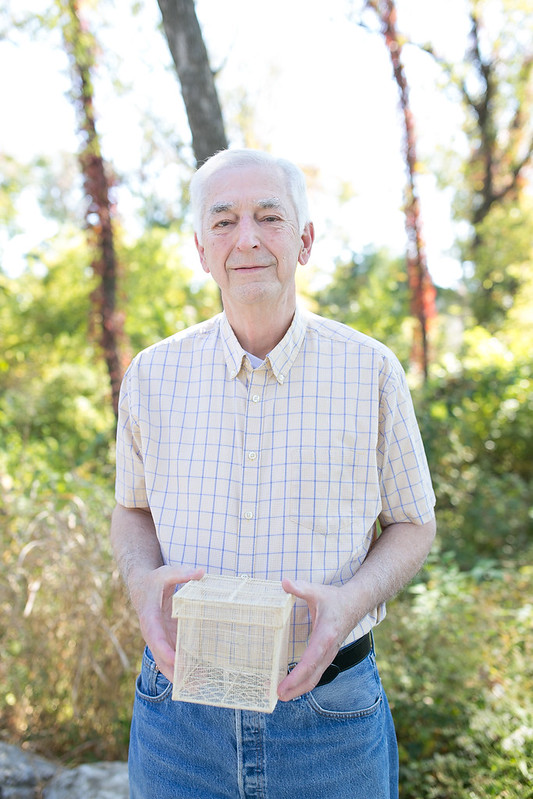 Below is a video of the butterfly release:


After mom's death, we really didn't have much time to grieve. There was so much to do in such little time to plan her funeral.   Plus, because of the rare disease with which she was diagnosed, her brain was to be autopsied.  There was coordination that had to take place with the University of California's research department on the disease, as they would be funding the autopsy and using the information for their research.  We all felt mom would want the autopsy--she would want to help in any way possible to help find a cure for the dreadful disease that afflicted her.  The closest facility that could perform the autopsy was in Missouri.  So, her body had to be transported there and back before the funeral.  We had to decide who would speak at her "celebration of life", what songs would be played; we wanted to create a photo slideshow and music playlist for visitation, and so much more.    We wanted her to be honored.  My mom was a pretty quiet and humble person.  I have always thought that at her funeral, we could brag all we wanted about how great a woman she was--she wouldn't have allowed it any other time.  So, we made sure to do a little bit of that. The four of us kids and our spouses came together, each using our own special talents or gifts and put together what I believe was a beautiful celebration of our mom's life.  It truly was lovely to see how the tasks got miraculously divided up based on the different areas of spiritual gifting.

It was a memorable time coming together with family and friends to celebrate my mom's life.  Of course, I wish mom's life was much longer.  But, she made the most of the time that she was here on earth and served and loved so many.

If you are interested, I have included a couple of videos at the bottom of this post. The first is a video slideshow that we played at mom's "celebration of life."  And last video is a song lyrics video, like the one with which we ended the ceremony.  The song is by Jeremy Camp and is titled, "There Will Be A Day."  It was such a wonderful way to end the ceremony--with hope!  We miss you greatly, Mom, but there will also be a day when we can join you in Heaven!

I want to say "thank you" to all who donated food to my family, sent sweet cards and messages, and also to those who donated to Clarehouse in her name.  Clarehouse is almost entirely funded by individual donors--like you who donated in my mother's name.  Kind, generous people like you made it possible for my mother to finish her life in such an amazing facility.  They charge nothing to guests who stay there.  It was truly like home and a huge relief and blessing for my dad.  I honestly don't know what we would have done without it for the last few weeks of her life.   Thank you, thank you, thank you!  :-)