Remember my last post? I talked about one of my New Year's Resolutions:  to share more "little stories" of our day-to-day.  I have always struggled with this because I could not possibly write a blog post about an entire day in the life of our household and have it flow smoothly.  It would jump from subject to subject and bounce from activity to activity (on extreme sides of the spectrum).  But you know what?  That is exactly what our day is like.

Up until the past week, Drew's and my alarm clock was Abbey. If I didn't hear the door open abruptly, I would awake after sensing a warm body next to me, standing by the bed and breathing on me.  Or, I would be awoken by Abbey's first words of the morning, "I want breakfast." (And every time, this was before 7am, sometimes as early as 5:30am).  Let me tell you--that is not the loveliest way to wake up in the morning.  You see, Abbey is very much a morning person.  Me?  I am not so much a morning person.  I need a little while before I become chatty Cathy.  But Abbey wakes up joyful and her sweet little mouth outputs about 1000 words per minute.  We knew it was getting out of hand when Abbey began going into Luke's room in the mornings, waking him up when it was still dark outside and asking him to play.  As I was doing some January organizing, I came across an old Ipod alarm clock that I used many years ago.  I gave it to Abbey and told her that she could not come out of her room until the clock said 7:XX.  I didn't care what the numbers following "7" were, but the clock hour had to indicate "7" or later.  The first couple of days she forgot about that clock, and she still left her room in the wee hours of the morning to wake us up.  But, then she began looking at it.  I have no idea what time she actually awoke, but she didn't come into our room until after 7, so the problem was solved as far as Drew and I were concerned.  And the past few days, Abbey has behaved marvelously at the time of her normal "three-nager dramatic" hours from 4-6pm.  So, I am guessing she has begun to get more sleep at night.  This morning was strange though.  Drew and I woke up on our own.  Children had no responsibility in our waking.  It was the weirdest thing.  Time went on and I began getting ready in our bathroom.  Finally, around 8am I decided to head to Luke and Abbey's hallway to investigate this odd occurrence.  I saw the hall door cracked and I heard giggling.  Luke and Abbey were in Abbey's room playing with her kitchen.  They were getting along angelically.  It was a miracle.  I didn't want to disturb it.  Upon further investigating I discovered that it was actually Luke that went into Abbey's room this time, woke her up and asked her to play with him.  Although, knowing him, I am sure the time was after 7am.  The boy likes his sleep.

All of that fun story to tell you how the day began. It began marvelously.  We had breakfast, packed up our Legos and snacks for Lego club at 10am.  Then, we left the house a little before 9am to run an errand and stop by a farmer's market.  Lego club was awesome, as always.  The theme of the build was "favorite things."  Abbey decided she wanted to direct Luke to build her lego creation this time instead of actually building it herself.  I love to see her actual builds, because they always have many intricate little details.  Luke happily obliged to build hers though, because the boy really enjoys building.  He could build all day if I let him.  Abbey directed Luke to build a dog--the dog happens to be our neighbor's dog, Trixie.  The creation even included some of Trixie's "boo-boos".  Luke created a "robot dinosaur" for himself, combining three of his favorites: legos, robots and dinosaurs.  He even had a mini-figure inside who operated the robot dinosaur.  I love watching him create!

It was a ridiculously gorgeous day outside today, so after each child presented and made Valentine's card for our military troops, they spent the rest of the morning (and part of the afternoon) outside playing.  We didn't leave until 1pm, and only because I told the kids we had to leave.  I was shocked they hadn't begged me for lunch yet, since they usually are "starving" at 11am.  Although, I did bring lots of snacks.  Anyway, we headed home and ate outside on our picnic table. Then, Luke and I did our schoolwork outside. 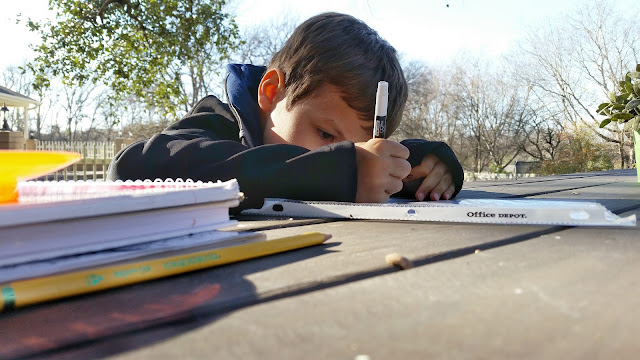 As we were finishing his schoolwork, we began hearing our neighbor friends outside playing.  We share a gate and the kids come and go freely between the two yards/homes.  It is the best thing ever!  Abbey ran over to our trampoline and began jumping and talking with our 1st grade neighbor, who was also on their trampoline jumping on the other side of the fence.  Our neighbor was having a playdate with a school friend though and I could tell Abbey, who was talking proudly non-stop about her new "Pete the Cat" stuffed animal, was being slightly annoying.  Just as I was going to go talk to Abbey, the neighbor invited Abbey over to play with her little sister inside their house--ha!  I thought that was a smart move on her part.   I texted my neighbor friend to make sure it was alright, and she sent me back the following photo: 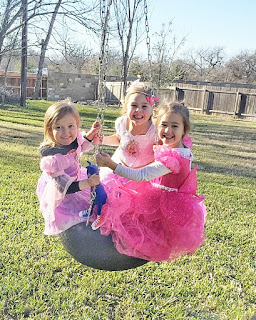 I am not even sure how Abbey got into their house and put a princess dress on so quickly, but the three girls looked like they were having a lot of fun.  Our neighbor that is Abbey's age was having a playdate with one of her friends as well.  Soon, our first grade neighbor and her friend came through the gate asking Luke if he wanted to play.  The three older kids began playing in our yard, while the younger ones were in our neighbor's yard.  However, shortly after, the three older kids were back in our neighbor's yard, totaling six kiddos playing in one yard. I followed the three older kiddos over to help watch the kids (and get some more "adult" conversation with my neighbor friend).  We had a lovely time, the weather was perfect, and none of us wanted the day to end!

We headed back to our home, and while I was getting dinner ready, Luke played until the sunset at our sandbox.  You should see the creation he is making there!

These are precious times.  The "busy-ness" is not a stressful busy like one often thinks of with deadlines, etc.  It is simply a very "full" day--a day full of life!  I wouldn't trade my current job for any other.  I am so thankful that God led me to this.