Little Stories by a Little Guy

Similar to what I have begun this New Year, Luke has also started writing "little stories."  A couple of months ago, I bought him a really cool book: 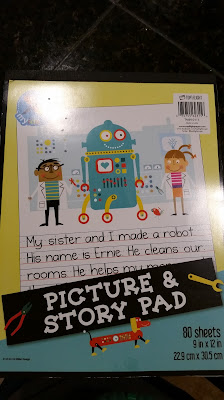 Luke loves to draw, and I thought it was time to start putting together "stories" with his pictures.  Since he enjoys drawing so much, I knew it would be a great opportunity to get him to write daily without complaining.  And, it has worked marvelously!

It is so much fun to watch his creative writing progress right before my eyes.  There are absolutely no rules with this project. I tell him that he can draw and write whatever he wants.  However, he has to do this completely independently, with no help from anyone else.  He has to write the words out based on how they sound in his head (unless they are sight words that he knows, etc,).  I don't correct him at all, because at this age, it is good to let them build their confidence and really use the phonics rules that are in their heads. 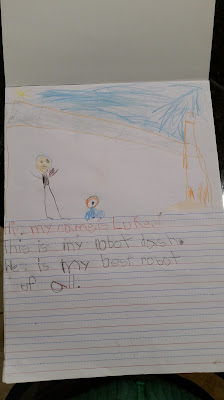 I think it is going to be a lot of fun to watch the stories and pictures progress in skill-level.  Also, I think he will really enjoy reading back through the stories later to see what his life looked like "back then."


I told him that he doesn't have to start each story with "Hi my name is Luke."  He replies though, "but that is my name and I want to put that on every story."  I then told him, "you can write whatever you want to say."  So, each story has begun with those words.  :-) 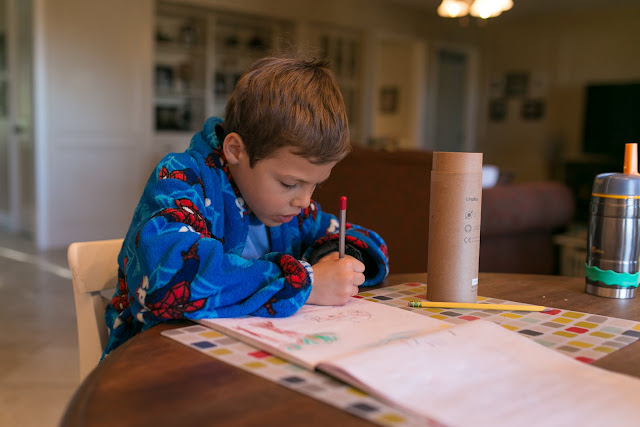 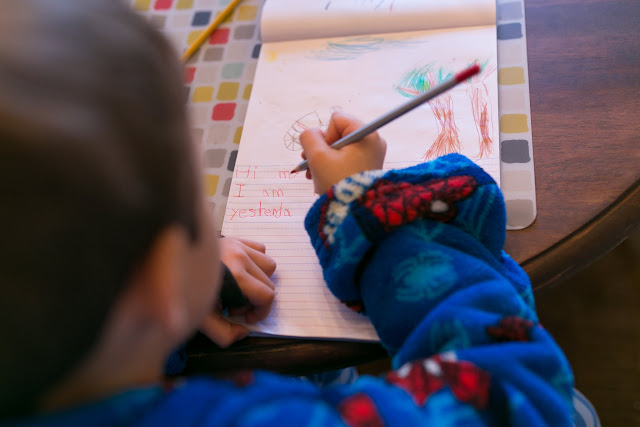 Yesterday was a very special day.  After 11 weeks of having very strict restrictions on activities due to his broken arm, he was able to resume his "normal activities" carefully, while still wearing his brace for 3 more weeks.  I am pretty sure he aimed to do ALL the activities!   We were outside all day.  We rode our bikes to the nearby "Play for All Abilities Park" and had a picnic with friends.  The entire way, Luke was saying, "This feels so good mommy." On the way back, there is a very steep hill that Luke, impressively, has made it up once.  He made it all the way up the hill without stopping one time--the first time we made the trek down this trail.  The following times though, he had to walk his bike up when he was near the top.  His bike has no gears like mine does, so that makes it pretty difficult.  While I downshift, he is huffing and puffing all the way up.  Yesterday, after I arrived at the top, pulling Abbey behind in the bike trailer, I looked down the hill, expecting to see him halfway down the hill or so (perhaps walking his bike up).  However, he was literally right behind me.  It startled me, because I truly didn't expect him to be inches behind the bike trailer.  I was so proud of him!

Bike riding wasn't the only activity he resumed yesterday.  He also got to ride his scooter that he got for Christmas (but couldn't step foot on until yesterday).  And, he did some swinging and playing on the playground.  But, that bike ride up the steep hill was memorable.   So memorable, that he wrote about it this morning. 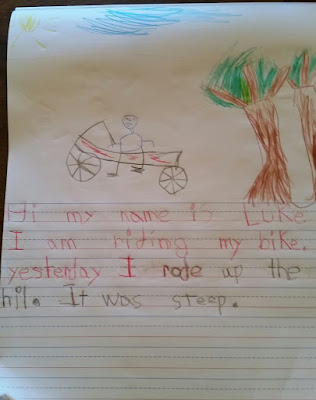 I absolutely love seeing what he comes up with each day!  I have even noticed that he flips through the book every couple of days with a smile on his face to read what he previously wrote.