Our kids get very excited about parties--especially their birthday parties.  We only do big parties on even birthday years.  Since we skip a year, we do a lot of planning for the parties on the even years to make sure they are extra special.  Luke decided many months ago that he was going to have an outdoor adventure themed party for his 8th birthday.  So, we discussed over several months what types of activities we could do, what kind of food we could have and more.  This was a really fun party for me to plan, because I personally LOVE all things outdoor adventure.  Here is how his party went down:

We divided all of the kids up into two teams.  We decided this before the party to make sure that the teams were as even as possible, and that there wouldn't be any complaints over which teams the kids were on.  We had some competitive kids attending this party and I knew it could be disastrous if we picked the teams at the party.  Minus a few kids who were unhappy about the team they were on, this part went pretty well.  So, as the kids arrived, they received their team's battle symbol on their face in the form of warpaint (courtesy of Mimi).   We came up with the battle symbol for the war paint pre-party as well. 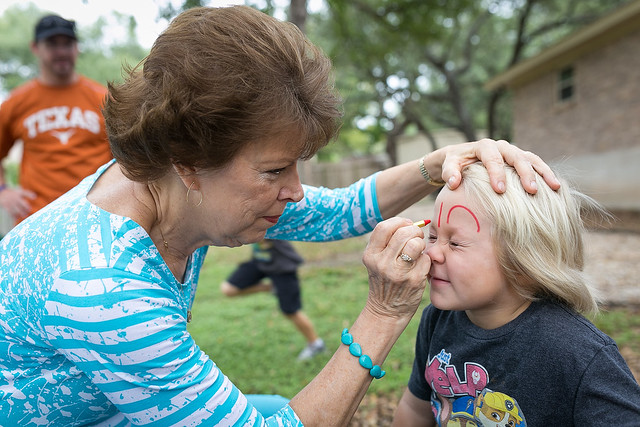 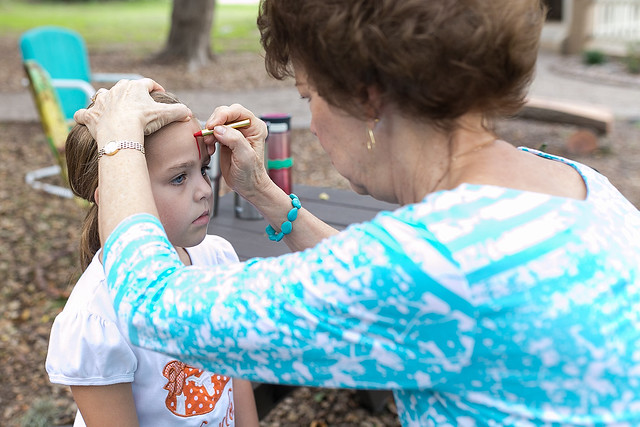 And some kids were more excited about the war paint than others...


But for the most part, the kids really enjoyed the war paint and it added to the fun.  Once everyone arrived, we began the team competitions.


The first event was archery.  In this event, each kid got three attempts at earning points by hitting the target in specific areas.  Papa ran this event and added up the points for each kid.  The team's score was equal to the kid's score on that team that was the highest. (This made less math for us to have to do--ha!) 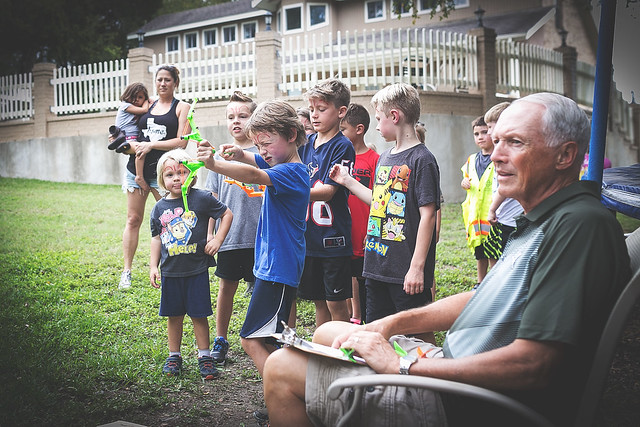 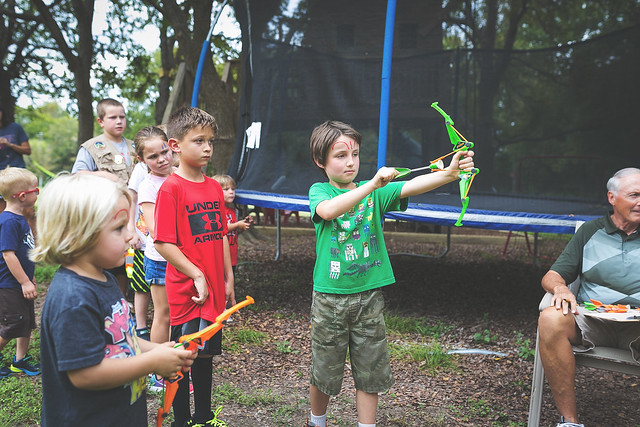 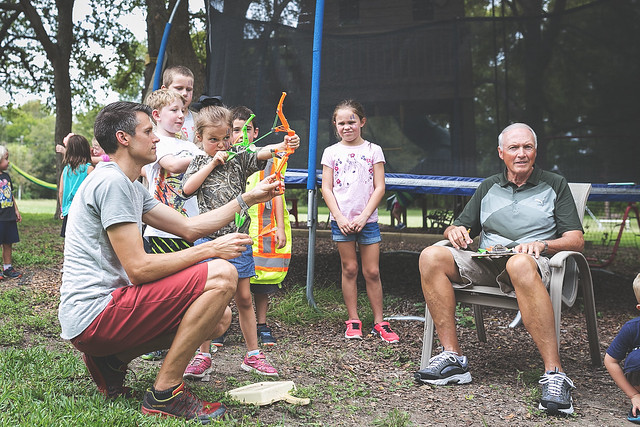 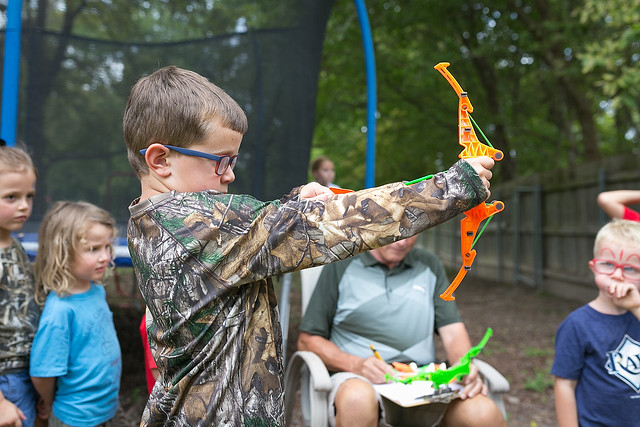 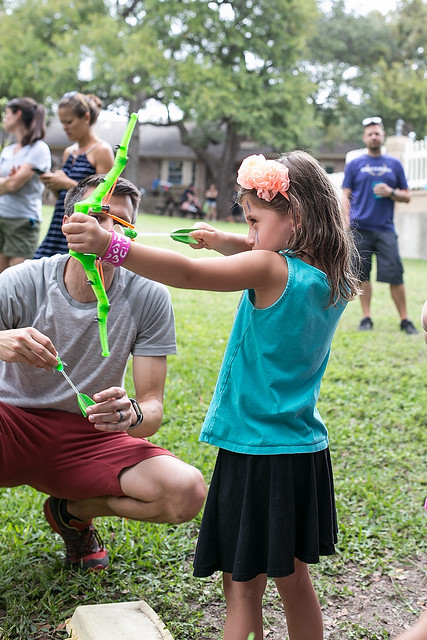 The red team won the first event.  Then, it was time for the next event--the obstacle race.  But before we began that, we had to take a quick break for some team pictures.  (Each team came up with their team name before the first event.) 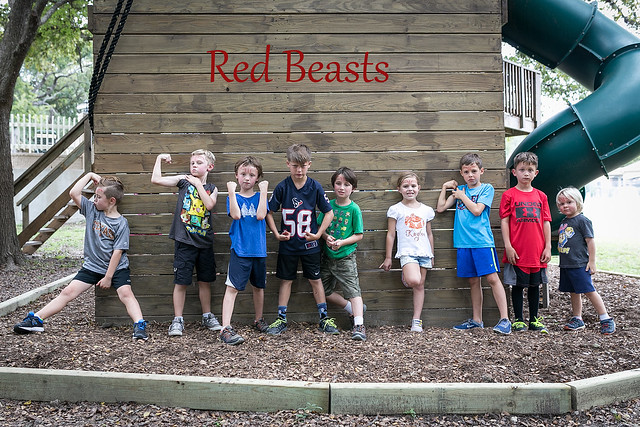 Next up was the obstacle race.  Each team raced around many obstacles and the team with the fastest total time won.  The competitors had to race around the balance beam (which outlines our treehouse), run over and under hurdles, complete the in and out ladder obstacle, run around the fire pit, complete 5 jumps with a jump rope (or do 10 jumping jacks), complete the ninja line obstacle, and lastly, throw the weighted ball into a target, and then run and tag the next teammate.

One of the final obstacles was the ninja line.  We just had the kids go to the 5th hold, since it was tough (a rope knot).  Here is a little video of Luke recently playing on the Ninjaline, in case you are curious what it is:

The kids had the option of skipping the ninjaline and throwing the weighted ball into the target 3 times (they only had to throw it in once if they attempted the ninjaline).

The blue team ended up winning this challenge.  So, the teams were tied up going into the final challenge:  a scavenger hunt.  The kids were each given a compass (which also was one of their party favors). They used the compass and the word clues to try to find each subsequent clue, which eventually led them to the treasure.  Each team had a different set of clues and locations to travel to, before finding the final treasure.  The first team to the treasure was the blue team, so they were the winners.  (I didn't get any photos or videos of this because I was running this particular challenge by myself.)  The blue team got to line up first to select a treasure:  some really beautiful polished rocks we purchased.  The red team also got to pick out a treasure.

(We wanted to let the kids take a turn on our zipline during the party; however, we couldn't figure out how to get over 22 kids in and out of the harness and give them all turns within the time constraints of the party.  That would likely take days.)

Then, it was time for cake.  We had snacks out on a snack table inside the house that guests could munch on throughout the party.  In lieu of cake, we were just going to have birthday smores, but I couldn't figure out how to put the candles on that.  So, instead I made pumpkin cupcakes with a cinnamon icing and then we had smores too! 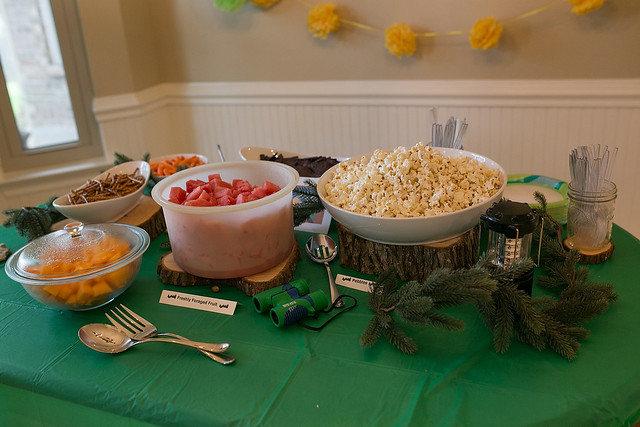 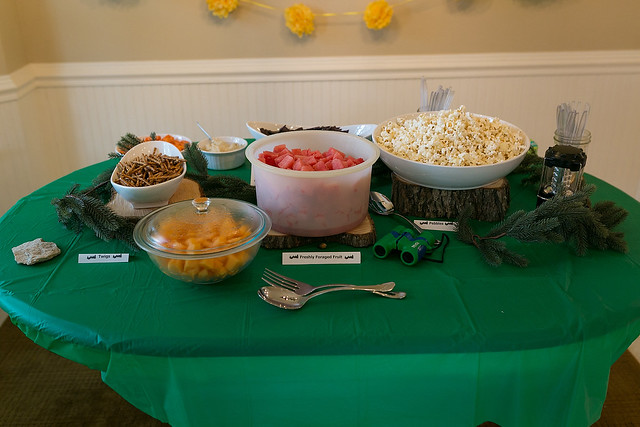 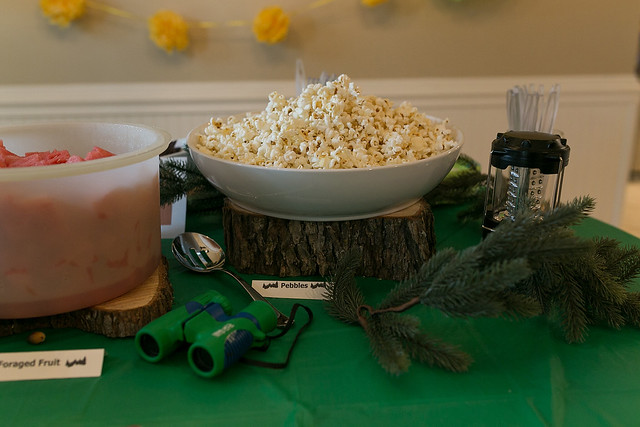 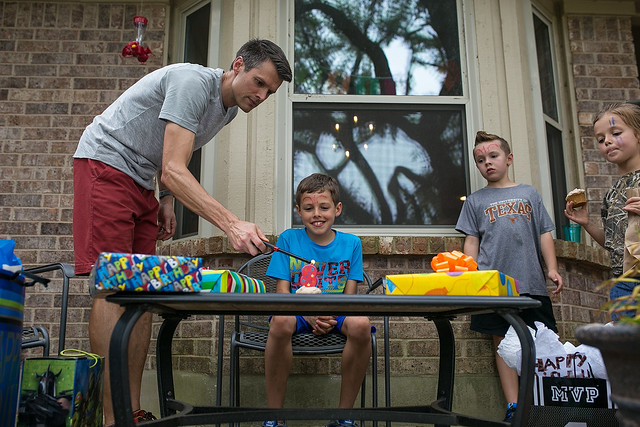 Then, after Luke opened presents it was smores time at the fire pit for those who wanted one. 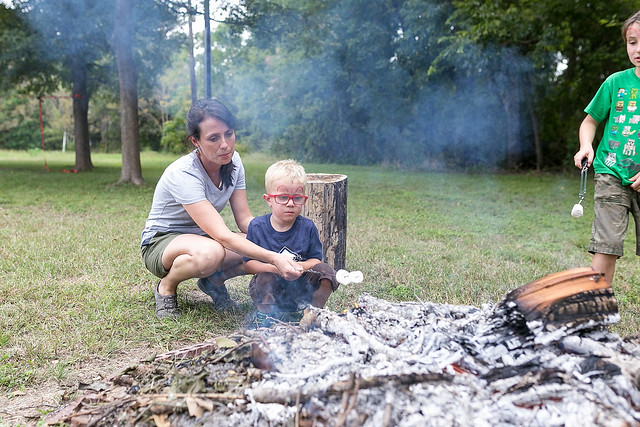 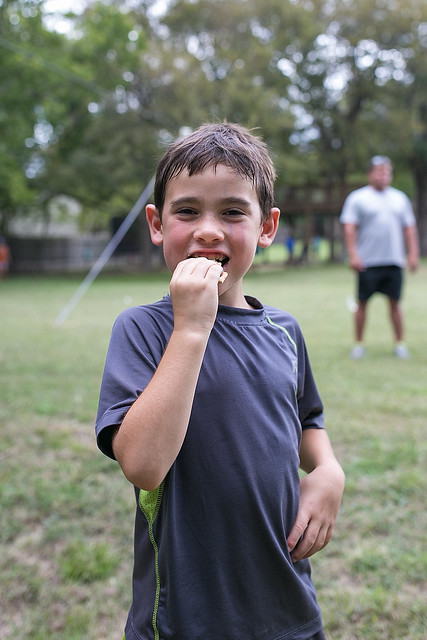 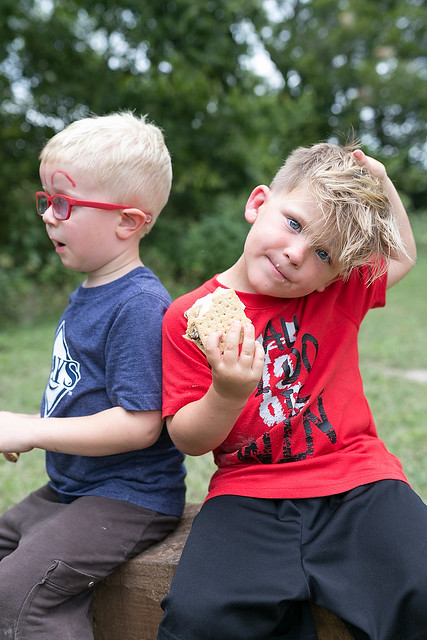 And we gave each family a little rustic party favor--a pencil holder that Drew crafted from a fallen tree: 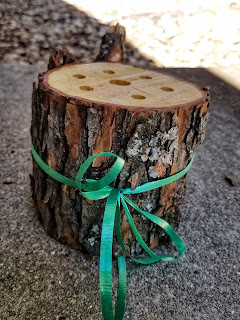 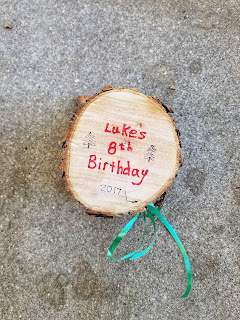 I just added the bow and the words on the bottom.

Luke said he enjoyed his party and soon it will be time to plan Abbey's 6th birthday (in January).  But, in the meantime, I am going to enjoy this time in between when there is no party planning going on.  Party planning is so much fun and I love seeing the kids enjoy the fruits of the planning, but it is also so much work.   We have so many fun memories from that day though that we get to keep with us forever!