Our Ultimate Tree Fort is Complete!

When we looked at the property where we currently live for the first time, I instantly had all sorts of dreams of things we could do with the space.  As a child, I always dreamed of having a treehouse.  One of my favorite places to be was up in a tree.  But, we never had a treehouse, since the home that had the perfect trees for one was one which we moved to when I finished 8th grade.  Although I certainly would have still loved it at that age, I understand that it made sense not to begin building one at that point.  When we stepped onto our current property, I immediately found the perfect spot for a treehouse.  We moved in during the month of March 2015.  It was then that we began planning and dreaming about our ultimate tree fort.  We decided not to build the structure using the trees for support, because we wanted to make sure not to damage them at all.  Instead, we would build the structure under and among the trees.

It took quite a while to research the subject and figure out exactly what we wanted ours to look like.  This was going to be a big investment of time and money and we wanted something that would be enjoyed for many, many years.  We finalized our plans and then tried to figure out how to go about building it ourselves (even thouugh we are not carpenters and don't have tons of spare time).  After months of trying to figure out how to start and how to go about building it safely, checking out library books and doing lots of research on the subject, we finally decided to contract out the building of the main structure.  We wanted to ensure it was going to be safe for everyone since it was such a large structure.  Plus, if we tackled that part, we would be working on it for years. Therefore, I drew out the plans and had several contractors bid on the project.  In April of 2017, we selected our contractor and began construction.  The contractor ended up building the large main structure and also stained it. (They didn't do a great job staining it, but at least that was one big part we didn't have to do.)  They finished up within a week and a half or so.

After the main part was constructed, we began adding components, such as the cargo net, tube slide, zip line, stair railing, border of posts around the bottom of the structure to hold all the mulch in, hanging hammock swings, the bolt-on rock holds for the rock climbing wall, the door for the treehouse part, the climbing rope, solar lights on the outside, a fold up attached table from Ikea and window screens.  All of these extras have taken a while, but the treehouse was finally completed in late September!  It is my dream treehouse and we are really enjoying it.  I am so glad we constructed this!!

Here are some photos of the end result.  I just went outside and snapped these today with my phone--which is not a fancy one.  So, the quality isn't the best, but you can still tell what the treehouse looks like at least.  Also, I generally don't like photos taken in speckled shade, as it is difficult to see the details.  But, today was very bright and sunny, so there was a lot of speckled sun/shade on the treehouse (which is completely covered with trees).  Someday I will take photos of the tree fort when it is overcast out or when the sun begins to set. 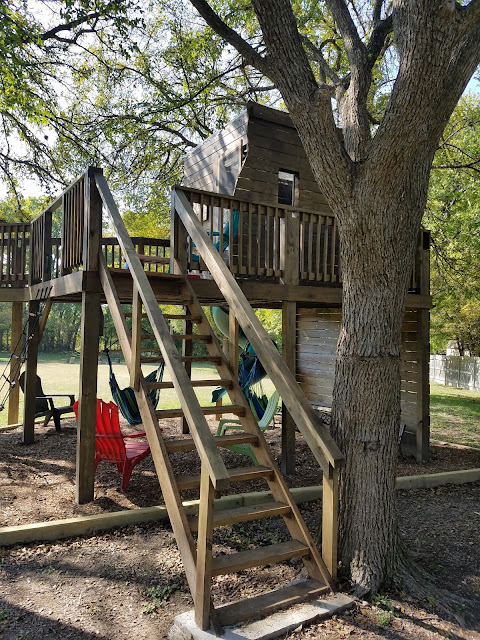 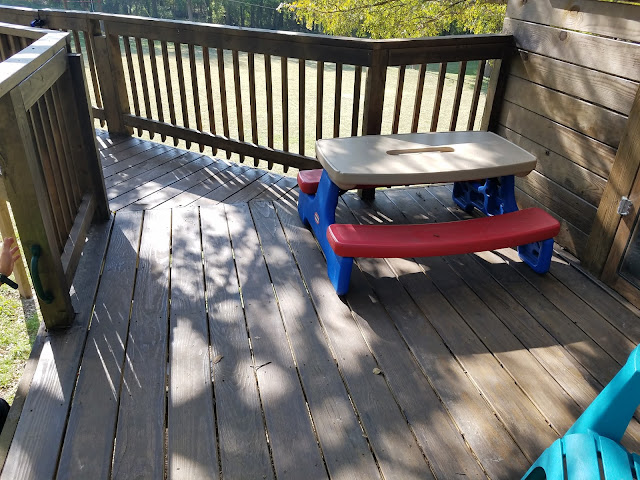 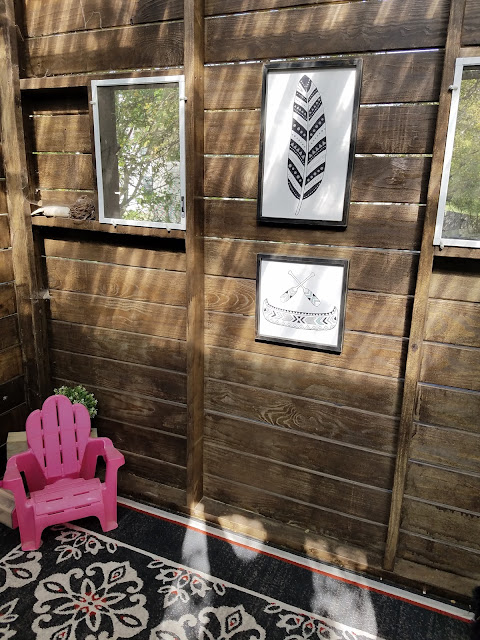 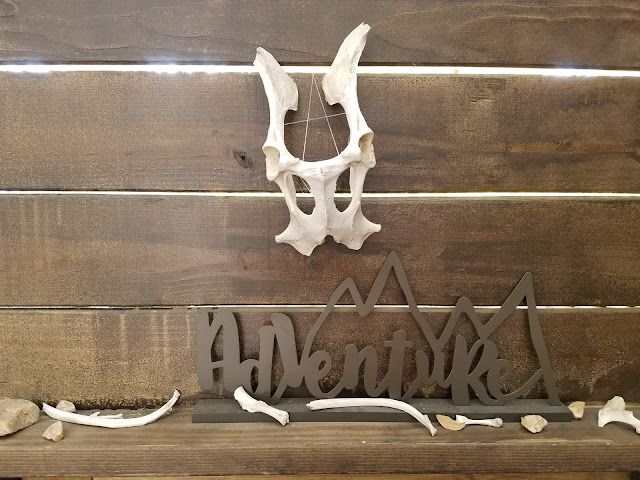 Here is a little video tour in case anyone is interested: