When we were planning our trip, the part that was up in the air until the last minute was the itinerary in the Los Angeles area.  We were initially going to explore LA one day and then pick one of the Disney parks to visit.   But, after talking to a lot of friends and getting their opinions on which one to select, we decided to just go ahead an do both Disneyland California Adventure and Disneyland.  So, we just skipped LA and went straight from Joshua Tree National Park to our hotel in Anaheim.  We stayed off of park grounds at a hotel that had a complementary shuttle to the parks and ended up saving a TON of money.  It was definitely the way to go for us.    (Y'all, we spent a total of $610.86 on all the hotels for the entire week long trip--and that includes taxes and fees and they were all nice hotels.  We needed to do that though, because the visits to the two Disney parks cost more than all of our hotel stays!)

On day one, we grabbed the first shuttle out from the hotel and headed to Disneyland California Adventure.  We visited this park first, because it happened to be early entry day at Disneyland for those staying at the Disney hotels.  Thus, we figured that California Adventure would be less busy than Disneyland this day.  We arrived at the park about 30 minutes before they opened.  We got in and waited for them to remove the ropes and decided to begin at Toy Story Mania.  We knew it would be less busy than other rides, like in Cars Land.  For $10/ticket we purchased the Max Pass--which I highly recommend.  It includes fast passes and a photo pass.  This means, from our phone app we could get in the fast pass line for whichever ride we wanted.  It also meant that anytime we saw the Disney photographers around the park, they could take our photo and we could easily download them from our phone.  This was great because we didn't want to lug our big camera into the park, and we were having so much fun that we didn't even take that many photos with our phones.  As we were running to Toy Story Mania, Drew got fast pass tickets on his phone app to the Radiator Springs Racers ride in Cars Land.  We were the first people on the Toy Story ride!  We rode some other things in the area and then headed to Radiator Springs. 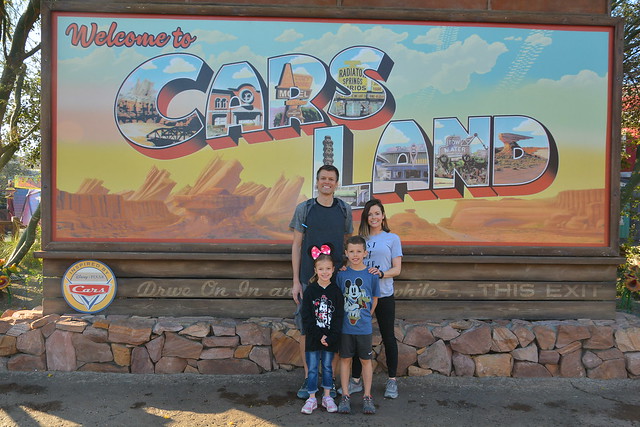 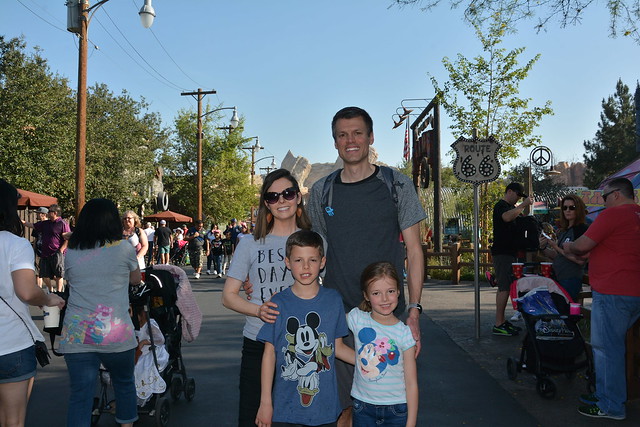 Here is a video from our ride:

The kids really enjoyed spotting the Disney characters and getting photos with them. 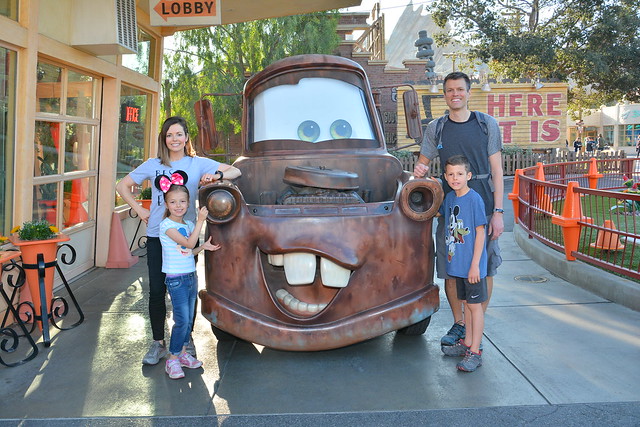 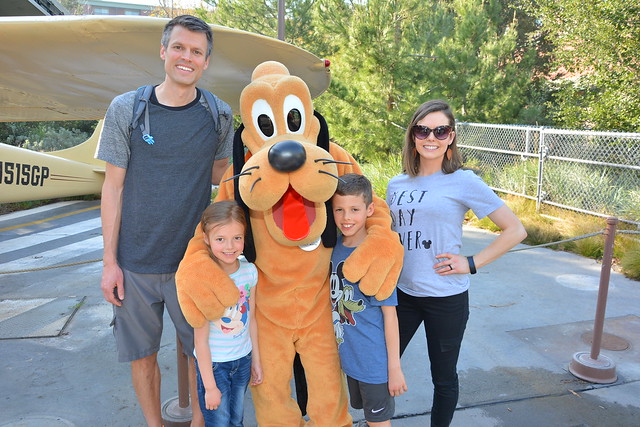 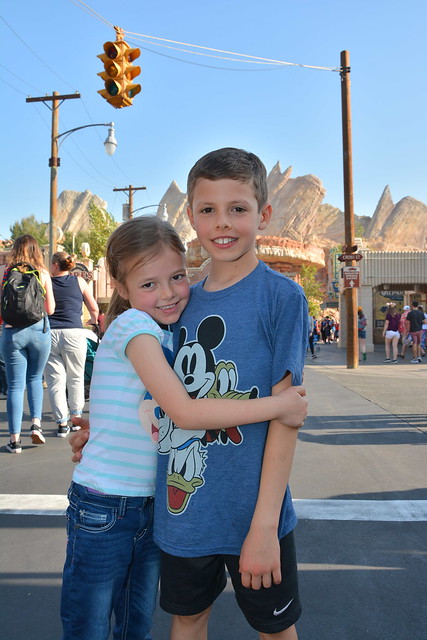 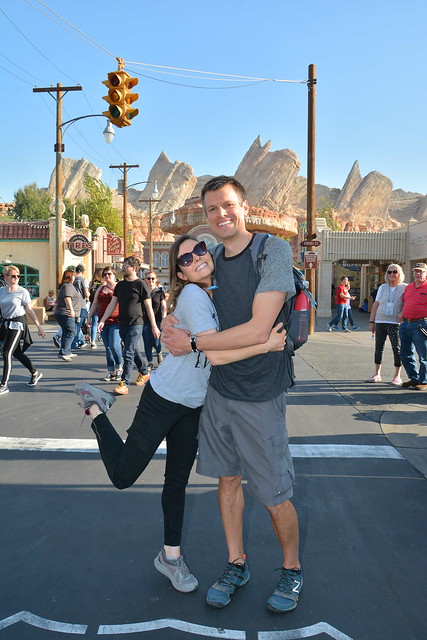 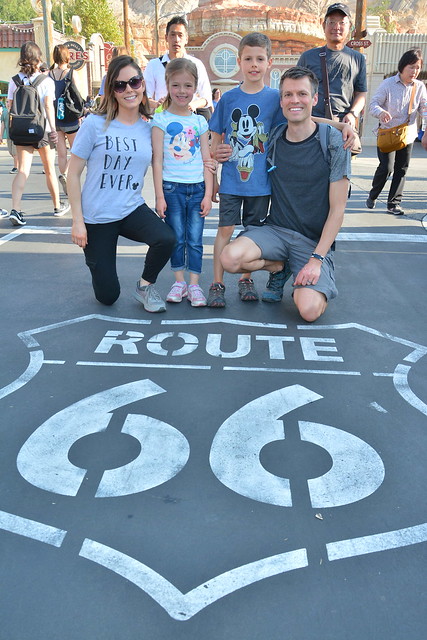 We convinced Abbey to go on the Guardians of the Galaxy ride---we told her it was a lot like riding on a elevator.  It goes up and down.  Wow--it was much scarier than the Tower of Terror ride I remember.  But it was fun--for us adults anyway.  That was the only time we rode that one--for the kids' sake.  You can see Drew is looking down at Abbey in the photo they snapped on the ride.  :-) 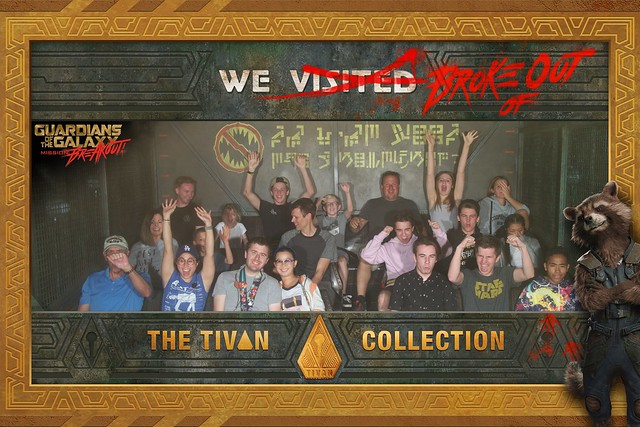 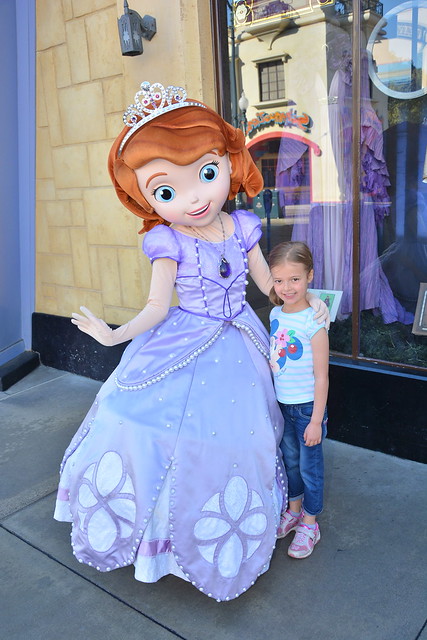 We managed to ride every single ride at Disneyland California Adventure.  Abbey's favorite ride was "soaring around the world" and Luke's favorite was "Goofy's Sky School."  It was such a fun day!  We left the park around 4pm to head to Downtown Disney and take advantage of Happy Hour prices on food.  We definitely saved money that way vs. buying the food in the park.  After dinner we went back into the park and enjoyed more rides (while everyone else was eating dinner).

Radiator Springs looked really cool all lit up at night!

The next day, we headed to Disnleyland.  The kids were so excited to see the castle. 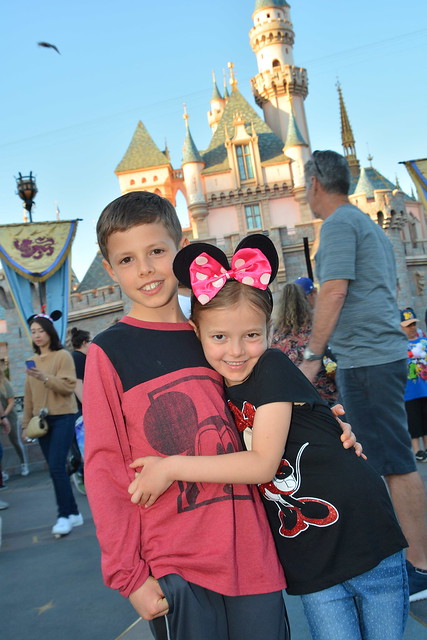 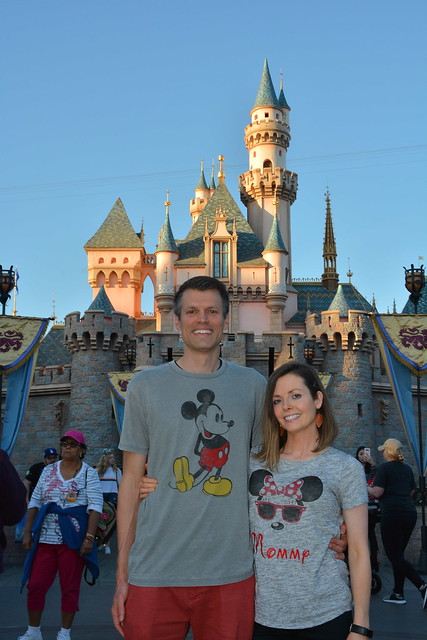 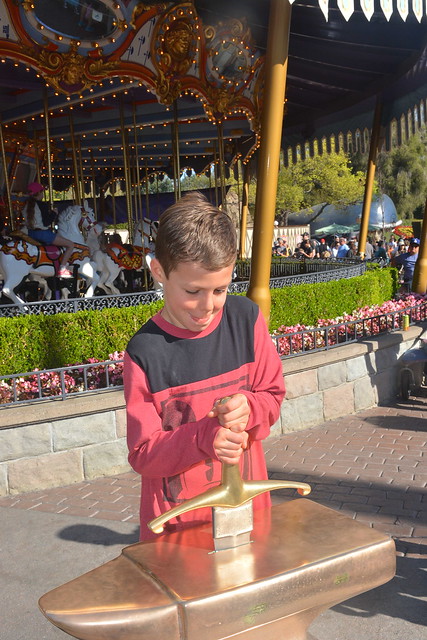 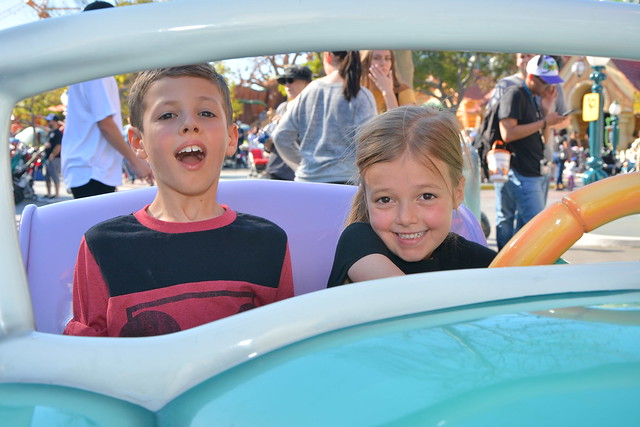 We really enjoyed all of the Star Wars rides and attractions at Disneyland.  We met several of the characters, including Chewbacca and Kylo Ren.  Chewbacca was really funny.  Right before the picture, he took his big furry hands and rubbed them on my head, making my hair stick up from the static. 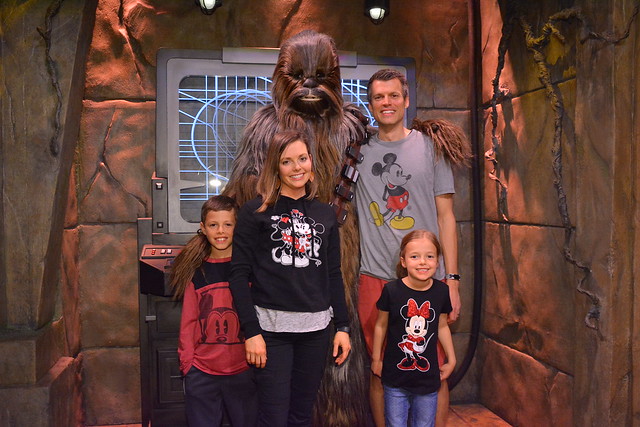 Abbey and Luke enjoyed meeting a lot of the characters again.  Tinkerbell was one of Abbey's favorites:

For lunch at Disneyland I highly recommend eating at either the New Orleans Cafe (there was no wait) and get the Monte Cristo.  Very indulgent--but the four of us split two of them and we all thoroughly enjoyed it!  You can also get it at the Blue Bayou Cafe inside the pirates of the Caribbean ride, but you pretty much need reservations to eat there, plus it is more expensive.  For dinner, we left the park again early (around 4) and enjoyed happy hour prices at an Italian/Pizza restaurant in Downtown Disney.  We came back into the park to enjoy more rides while everyone else was eating dinner.  Again, we managed to ride every ride in the park--many more than once.  It was an amazing day!! 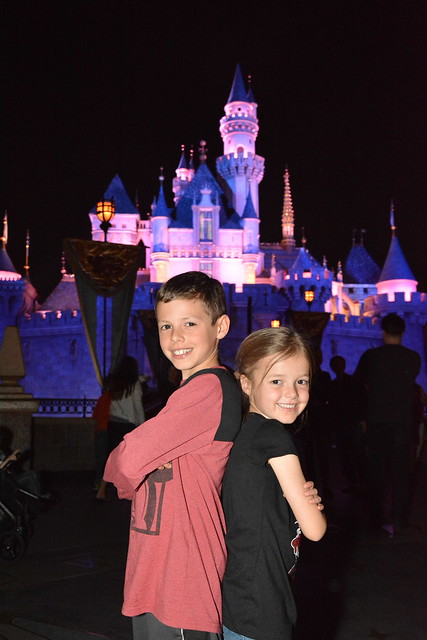 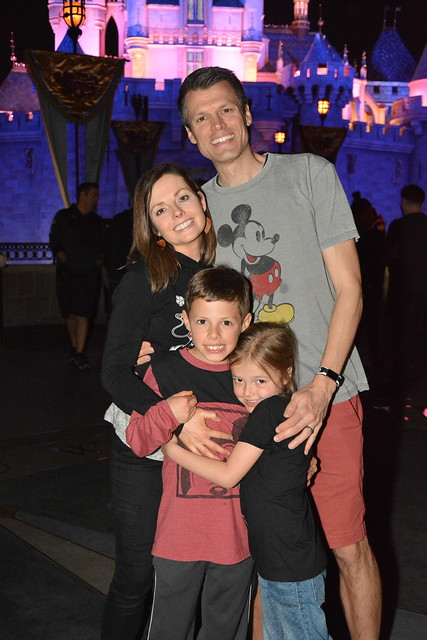 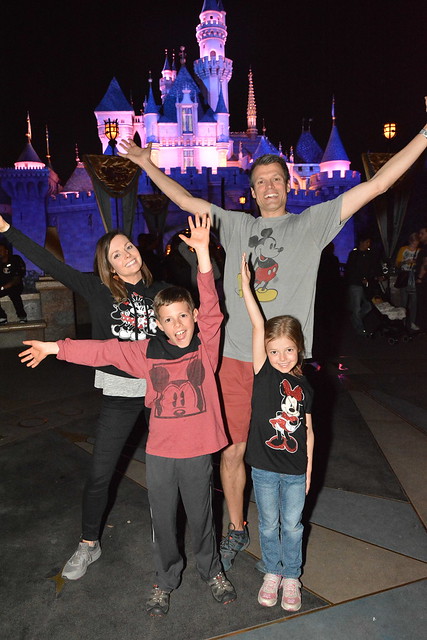 We did it!   We conquered Disney in California in two days--the perfect amount of time for us!  It wasn't stressful at all (the thought of Disneyworld right now scares me).  The weather was absolutely perfect too.