After I found out that Austin Capital Metrorail was letting kids (grades K-12 and younger) ride for free through 12/10/18 I knew it was time for a little urban adventure with the kids.  I was already planning on taking the kids to a Google Pixel 3 event, called Sights of Sound, that was located downtown.  And when I saw that the event was a short walk from the downtown metrorail station, it was a no-brainer to use the metrorail as our transportation to the event.  Because adventures are more fun with friends, we invited some to join us.


We met at the Howard Land Metrorail Station and took the 9:55 train. 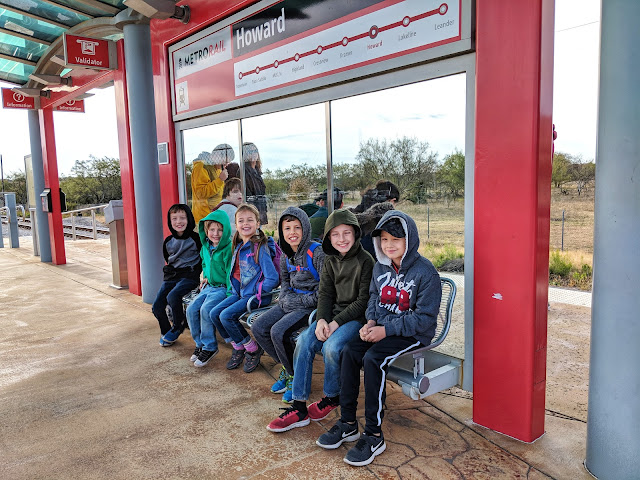 It was a very pleasant ride and we got to enjoy all the fall foliage through the big windows as we made our way downtown.  Austin sure is looking beautiful right now! 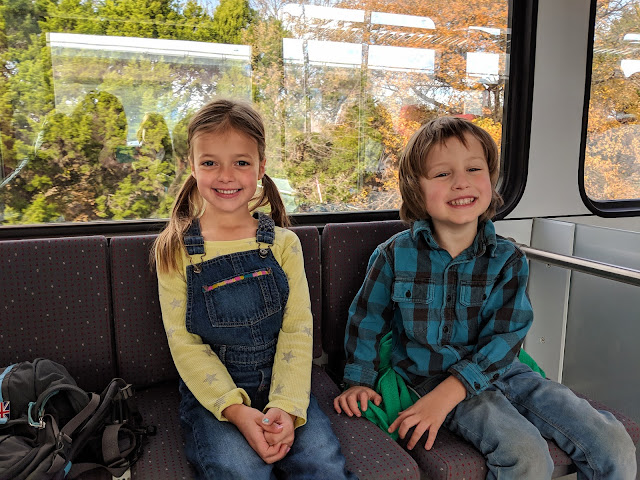 We arrived downtown around 10:30 and walked over to the google event.  At this event we were each (even the kids) given Google Pixel 3's and invited to explore four different rooms, each inspired by a musician. The rooms were unlocked using the phone and the spaces were great for putting Pixel 3's  camera features into action.  The immersive rooms featured: Ella Mai’s Inner Reflections, Future’s Trap Mansion, J Balvin’s Reggaeton World and Marshmello’s Happier Place (our favorite).  Here are some photos from the event: 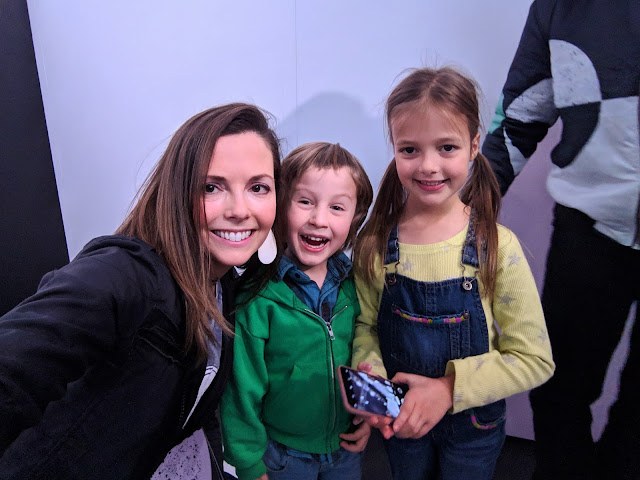 Abbey got to "unlock" the Marshmello--Happier room by answering the question about who collaborated with the band on the song.  She answered the question by pulling on a string under the "Bastille" balloon.  Once she did, it released confetti everywhere and the song, "Happier" began playing loudly.  It was so fun! The room even had a trampoline in it. 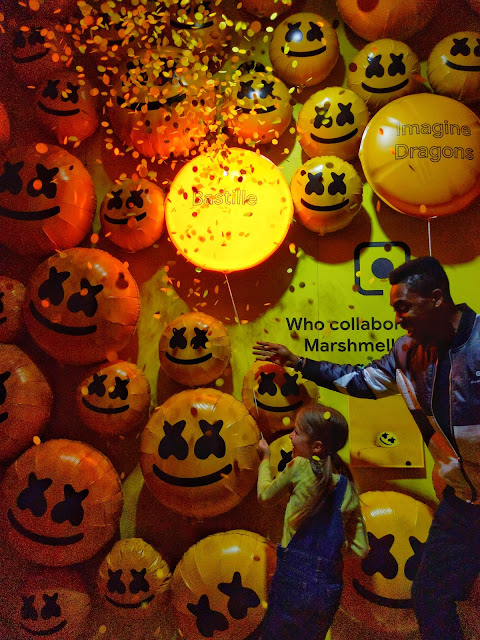 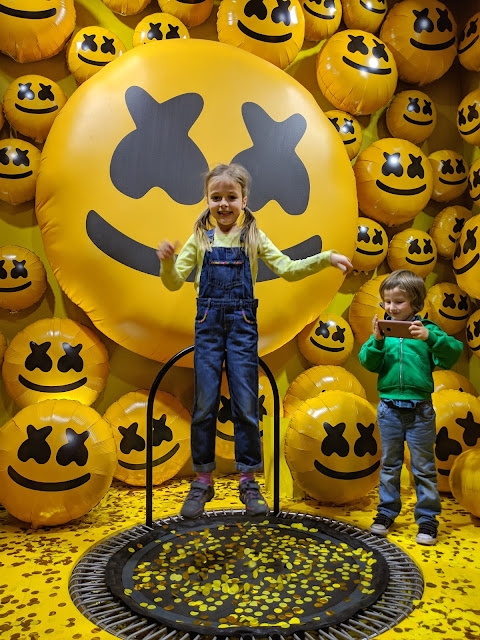 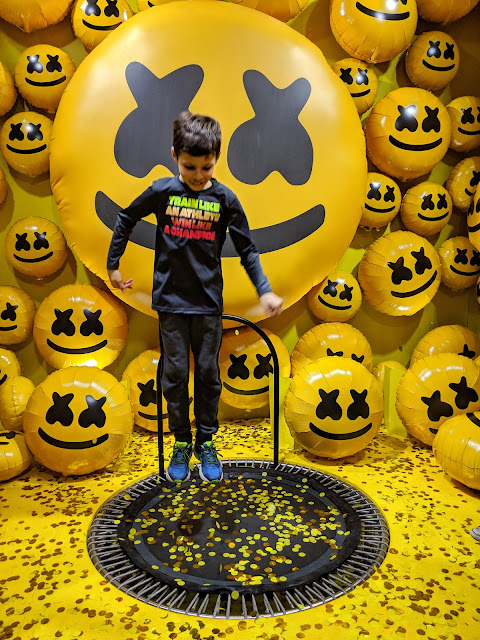 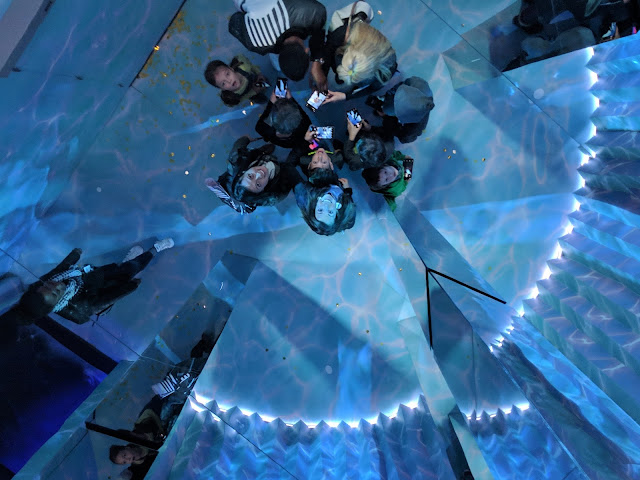 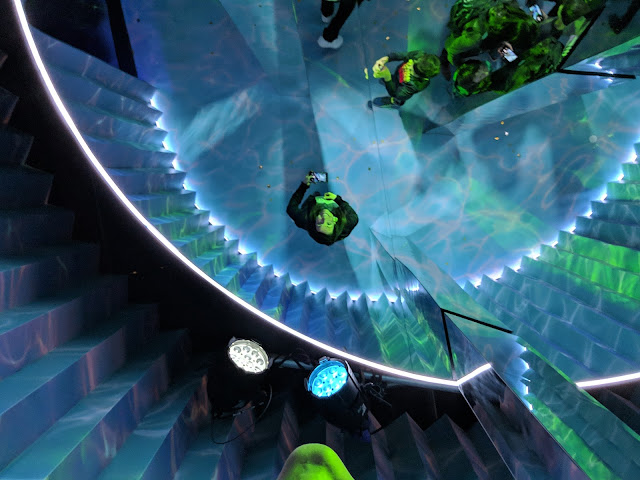 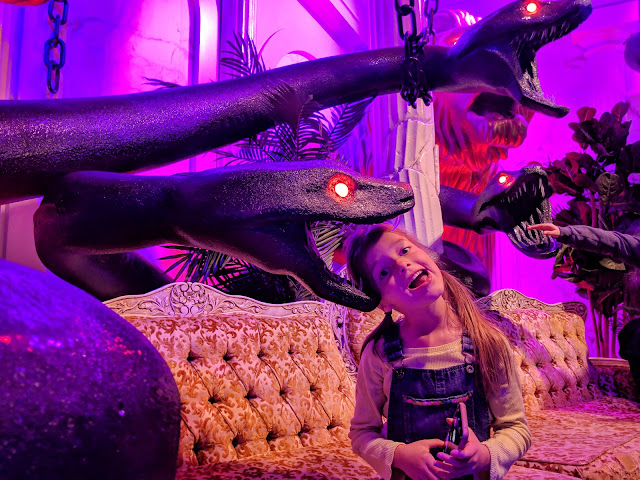 At the end of the event, we were each given the opportunity to play a bear claw game until we were able to capture a ball containing a prize card inside.  The prize card inside indicated whether we won a t-shirt or a Pixel 3 phone.  We all won t-shirts. 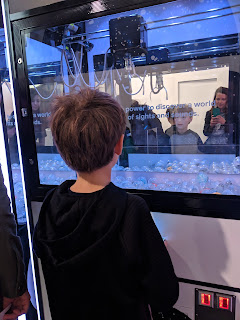 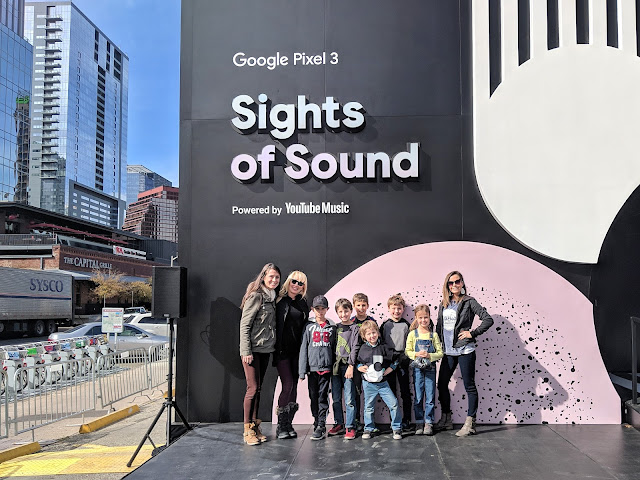 After the Google event, we walked over to the Fareground for lunch.  The Fareground is Austin's first food hall, which opened last year.  The marketplace hosts an "eclectic collection of cuisine from six premier local vendors, all openly seated to inspire culinary innovation and community building." (from their website).  It's great for kids because there are so many different options to enjoy.   Although, I will admit it can be a bit pricy.  If you are careful though, you can get away with not spending too much.  The kids tacos at Dai Due are almost the same size as the adult size and cost $3.  Abbey likes the Kolache ($4) at Henbit.  I usually enjoy the Ramen at Ni-Kome.  After lunch we walked over to the gingerbread village at the Four Seasons Hotel.  The Four Seasons has this display each year and sells the houses to benefit a local non-profit.  This year, the money will go to People'e Community Clinic.  The village has a theme of "white Christmas and features 11 traditional-meets-modern houses named after some of Austin’s most historic neighborhoods.  From their website: "The 100 percent-edible Village will be centred around a house that resembles the architecture of City Hall, with surrounding houses featuring exposed gingerbread and white frosting accents. According to Executive Pastry Chef Amanda Pallagi-Naim, the design and colour scheme was inspired by the Hotel’s newly renovated Lobby, which features a similar mix of classic and contemporary design elements.  In addition to the houses, Pallagi-Naim and her team create d three accessories, ranging from a vibrant ATX sign – the only colorful item in the entire Village – to a construction crane that represents the growth of the city." 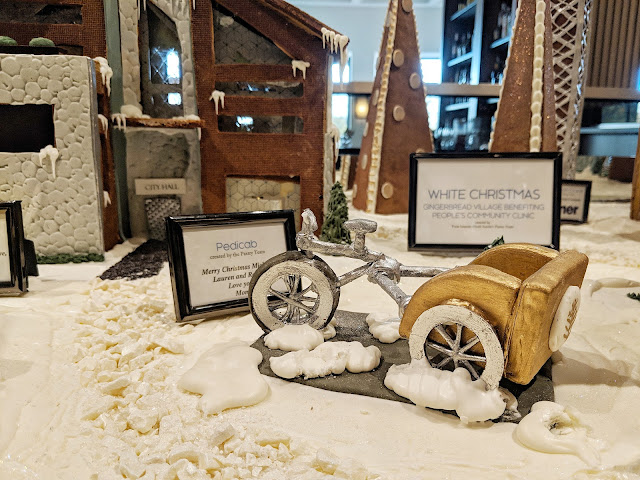 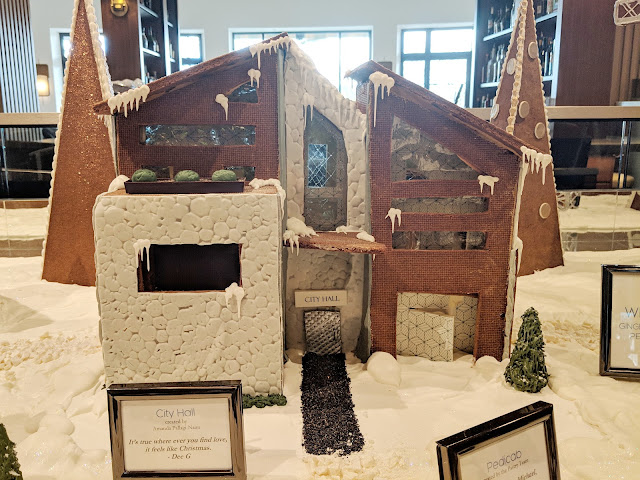 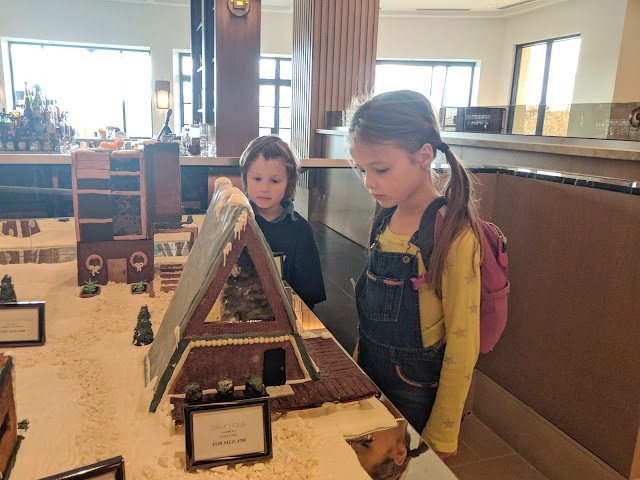 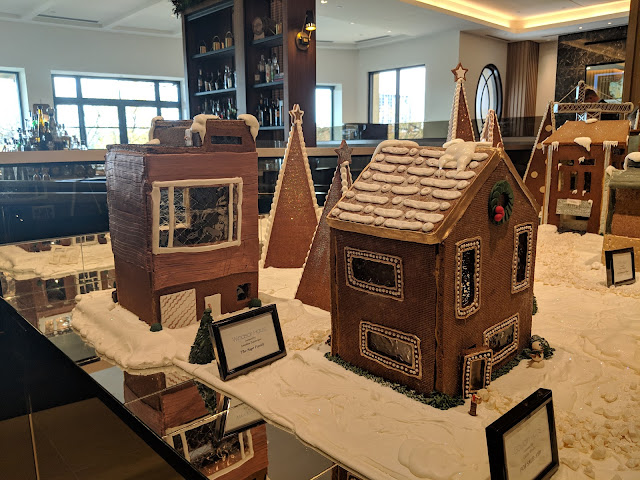 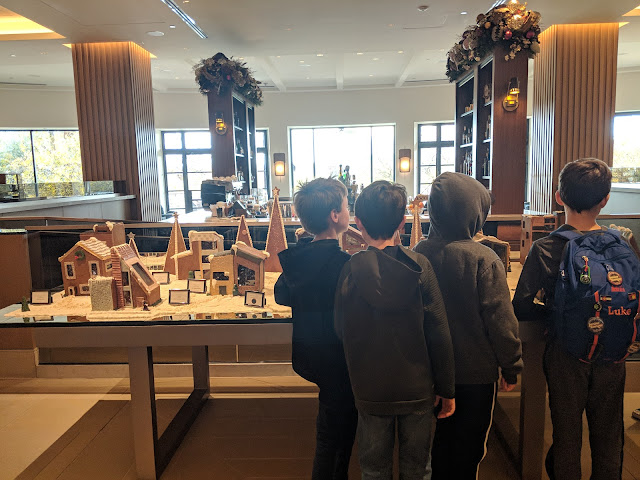 After looking at the village, we headed out to the back lawn of the Four Seasons.  No visit to the hotel is complete without doing that.  Their lawn is gorgeous and has so many things for the kids to enjoy.  The Austin hike and bike trail runs right behind the lawn, as well as Ladybird Lake.  The colors of fall are just gorgeous right now and lined the lake.  Us moms enjoyed sitting in the sun while the kids rolled down the hills, played lawn Jenga and sat on the huge hammock. 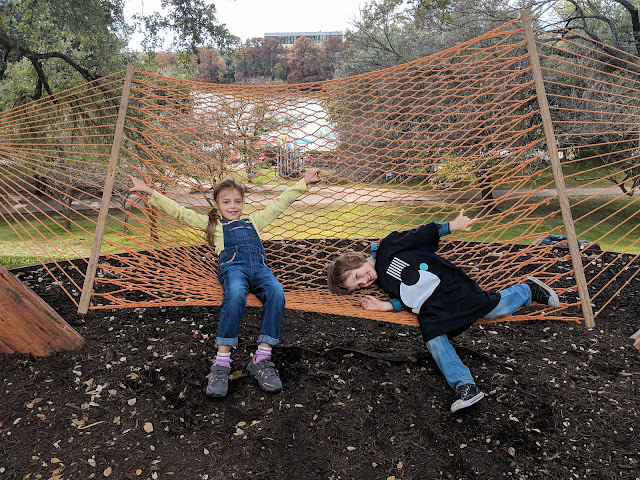 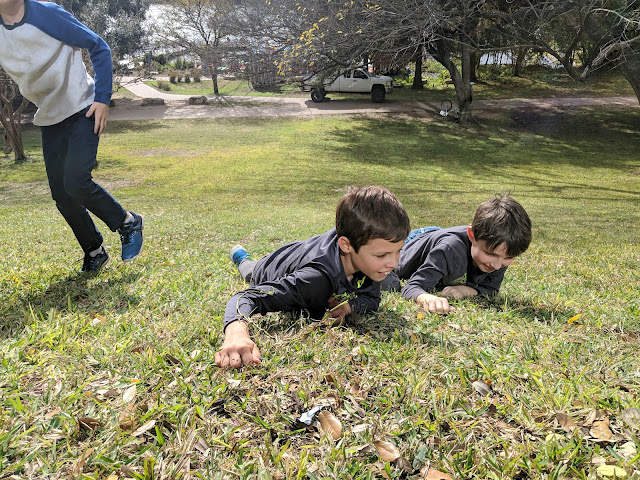 It was time to head back to the train station to catch the 1:55 train.  We began our walk back on the lovely trail.  We love this statue along the trail--it's made of tons of metal bikes. I always smile at these bike racks outside the convention center. 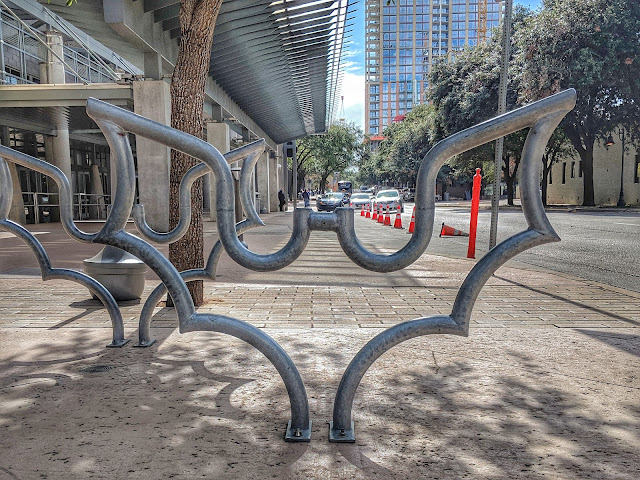 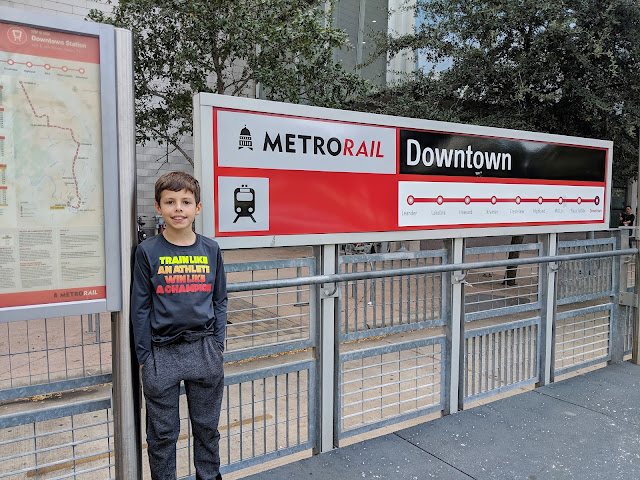 Time to head back home.  What a wonderful adventure with friends!